I just interviewed with Gavin’s speech therapist at @akronchildrens


Gavin and I have been home for awhile but I’ve been sorta trying to deal with life today and not going so well at the moment.

I’ll get back on track though.

As you know, Gavin was at Akron Children’s Hospital this morning for an evaluation of his speech and language abilities. 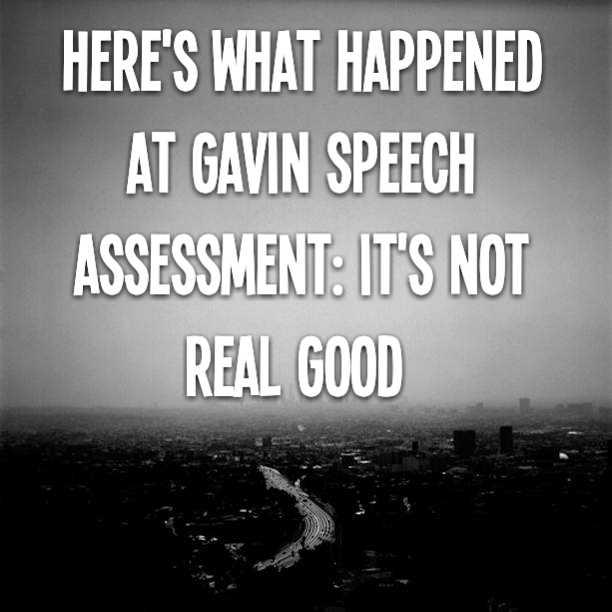 The goal is to get him back into speech therapy ASAP.

The evaluation was a necessary part of that process.

His therapist was really awesome and nothing short of what I would expect from a facility like Akron Children’s Hospital.. I hold them in the highest regard.

She interviewed me privately, which I thought was really nice because I hate talking about my kids, in front of my kids like they aren’t in the room.

Gavin’s evaluation took well over an hour but he finally emerged with a smile on his face.

I met with the therapist in private to go over the results, which I don’t have a copy of yet.

The long and short of it goes like this.

A child who scores in the 85-115 range is considered average. Gavin scored a 66 which classifies him as having severe speech and language issues.

I guess that’s not really a surprise but seeing this in writing really socks because it becomes real.

Anyway, Gavin reached a point where he became so frustrated that he started freaking out.  He wasn’t violent or anything like that.

That just kills me to hear that… 🙁

She didn’t push him and so my understanding is that he didn’t complete everything because he got too upset.

I don’t know how that impacted his score but I don’t image it helped.

She explained that while his score is really low, he does have a functional ability mixed in there.  Gavin struggled with expressive language things and contextual or comprehensive type things.

Nothing we do is going to fix his speech issues. In other words,  they aren’t likely to even improve. It’s important that we all have the same expectations going into this.

The reason speech is so important now is because the object here is to help him maintain what he still has.

We want to keep him from getting worse.

There’s no way to know if that’s even possible but we sure as hell are going to try….

We should be scheduled for therapy sessions in the very near future.

No. This was just a speech and language assessment

The 85-115 score is also used on iq tests and is the normal range of intelligence according to it. Does this speech test measure intellect as well?

No. This was just a speech and language assessment

The 85-115 score is also used on iq tests and is the normal range of intelligence according to it. Does this speech test measure intellect as well?