What I’ve Decided and Why: Potential changes to the boys overnight visits with their Mom 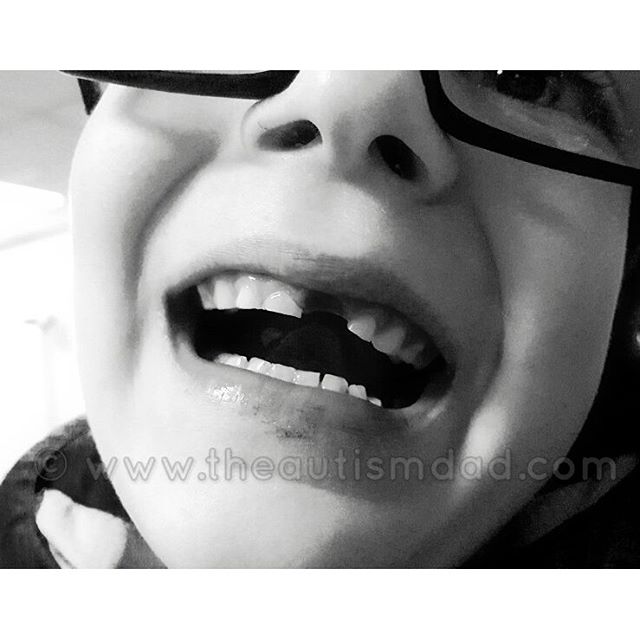 My tiny little Emmett lost his very first tooth today Emmett lost his very first tooth this evening. He actually lost it during the boys therapy with Dr. Pattie. I’m pretty sure it came out a little too early and here’s why I think that. When Emmett was younger, he fell and jammed that particular tooth up into his gums. We thought he had broken the tooth in half because it was only half as long as his other front tooth. The dentist said that it wasn’t broken but was instead shoved up into the gum. Anyway, I’ve no doubt the adult tooth is coming because recently, the tooth had moved back down into place. Shortly after, it became loose. It’s not a big deal but I foresee my littlest kiddo having an adorable gap for a little while before his adult tooth makes its appearance.

Congratulations! My eldest didn’t lose his first until the day after he turned seven. He has secondary immune dysfunction and had delayed eruption. Most kids lose their first tooth between 5-6.
Emmet is 7.5 right? He will probably be like Elliot and lose the rest around 8 and lose them in a short period. Usually the bottom two teeth go first.

Thanks. You’re probably right. The tooth fairy was having to more than once a week sometimes when Elliott started losing his.. lol

Thanks. You’re probably right. The tooth fairy was having to more than once a week sometimes when Elliott started losing his.. lol

Too early? I feel like his first tooth is late to the party. My best friend’s daughter is missing both bottom center teeth and she’s 6. I thought Emmett was older than that, though it’s entirely possible that I’m wrong about his age.

Either way, I hope the Tooth Fairy left him something good. : )

Emmett’s only 7. Elliott didn’t start losing his teeth until much later and then they all fell out in a short period of time.

Gavin was pulling his teeth out when he was younger.

How old was Elliott when he started losing teeth? I thought 7 was late-ish. I remember reading about Gavin pulling his teeth out. He has made such a turnaround from your early posts on L&T. I don’t know if it was a situation of getting meds straightened out or if he just outgrew some behaviors as he got older, but it’s nice to read about him doing well.

You know, now that I think about it, Elliott was probably 8ish..maybe a little younger.

Yeah, Gavin was doing that so the tooth fairy would come.

His meds haven’t changed since L&T but the dynamic in his life has. He does have attachment issues and so the relationship with his Mom was a major source of stress for him and for her.

She went to the ends of the Earth for Gavin when he was younger but I think the fact that she left has made his life better. It’s not necessarily anyone’s fault but just the nature of the illness.