I have a pretty big “The Autism Dad” blog update


I’ve been largely absent since yesterday morning.  For starters, I’ve had a ton of stuff going on and I’ve been yanked in quite a few different directions.

There’s a lot of things I’m trying to internally process but it’s in many ways, like spinning my wheels and getting nowhere fast or really anywhere at all for that matter.

This newer journey is really testing my resilience in ways I can’t even explain. 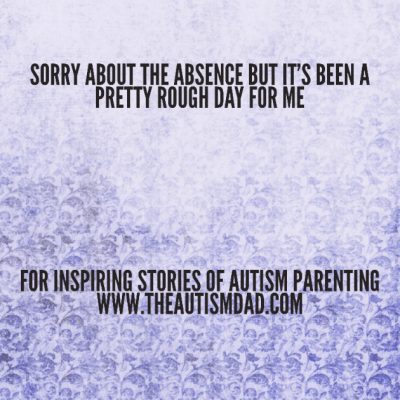 I figure at some point I’ll get my bearings but truthfully, I thought that would have happened by now.  It feels like I just can’t get any traction and that’s really frustrating.

Dr. Pattie and I were talking last night about the boys.  There’s always discussions about the stuff that’s going good for them, as well as the things that we still need to focus on.  It’s all very much a work in progress and that’s not likely to change anytime soon but that’s life..

I sometimes feel that it’s taking me way too long to heal from everything that’s happened.  As was recently pointed out in a comment by someone I once considered a friend, why can’t I just move on with my life like the boy’s Mother has? That’s something I asked Dr. Pattie about last night because I only want to do right by the boys.

I’m worried that healing is something that’s proving to be difficult because I’m living with the consequences of someone else’s actions. The majority of my time and energy is spent on my kids, as it should be but it really limits the time I have to spend on myself.

Even if I do everything right (which never happens), there’s still nothing I can do to make things better for the boys. On a daily basis, I give them every ounce of everything I have but I can’t take the place of what they’ve lost.  I can’t fill that void.

Dr. Pattie told me that there’s no predetermined time-frame for something like this. Healing is process that’s different for everyone and I’ll get there.

It’s much more difficult to find my way, when I’m always wrapped up in taking care of everyone else and I guess that makes sense.

Anyway, that’s just a little peak into where my heads at right now.

Thankfully, there’s very little going on during the day today… I have a meeting right after the boys go to school but that’s about it.  We have Dr. Pattie after school and then the boys have dinner with their Mom.

I’m hoping to get caught up on a few things and finish working on some changes I’m making to this site to help increase revenue.

Now I just want to find some sleep before my alarm goes off in a few hours..  ☺