I want to take a few minutes and get you caught up on a couple things before getting back to the challenges of my day.

First of all, Emmett didn’t sleep last night, in what’s becoming the status quo for his first night home after an overnight stay with his Mom.  I don’t think this has anything to do with anyone doing anything wrong during these rather brief visits.

The reality is that Emmett is struggling more and more with this whole situation. I suspect that the sleep issues are mostly the result of transition.  Kids on the spectrum, typically don’t transition well.

The problem is the rather extreme nature of his reaction. 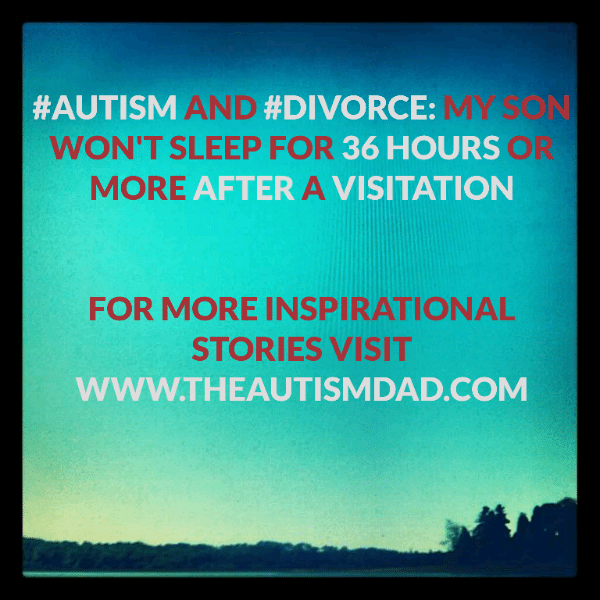 This trend first began several months ago now, if I recall correctly but I don’t know if there was really a triggering event.

I’m currently writing these words through eyes that are barely focusing on what I need them to and a mind that’s all but completely fogged over with exhaustion.

We’ve been exploring this transition issue during therapy but Emmett can’t really provide any insight. It’s easy to just blame the visits and say maybe they should be adjusted or stopped but that’s not the solution because I don’t think the visits are really the root of the problem.

I think that because of Emmett profound lack of expressive language skills, he’s unable to express his feelings in a manner that would help me to help him.

Since his Mom left, he’s never really expressed anger but would say he’s sad and blindly defense her actions.  Instead, I knew he was struggling.  Everyone knew he was struggling.
I could see a significant shift in his behaviors, sleep disturbances, major increase in tummy aches and of course, the return of his fever cycles, shortly after this all began.

I suspect that everything is catching up to him and without an expressive avenue for him to release this built up emotion, things in his life are becoming more challenging for him.

I think that the visits with his Mom go well and have gotten much better over time. At the same time, it’s a constant reminder of all he’s lost and when he comes home, he just sorta falls apart.

The not sleeping for 36+ hours after a visit thing only happened after overnight visits at first.  Now I’m seeing these sleep disturbances after the every other Wednesday night dinners as well, although not to the same extreme.

All I know is that this is incredibly difficult for me as a grown adult.  I can’t imagine what it’s like for someone like Emmett.

At this point, my options are limited.  This isn’t something that can easily be fixed because it’s a very complicated situation.  I’ll continue to carefully work with his therapist and everyone else involved, to do what I can to make his life easier for him, including speech therapy in order to help him build up his expressive language skills.

What I can say is that this experience has confirmed what I’ve said all along.  When one parent makes a life altering decision that so profoundly impacts everyone around them, there’s is absolutely no way to know how far reaching the consequences will be.

Even when it eventually becomes clear that this was for the best, the trauma is still very real. When you’re dealing with kids on the Autism Spectrum, it’s impossible to predict how they will deal with things, how far into the future they will be impacted and to what extent their experience will affect the rest of their lives.