I’ve already canceled everything for Tuesday and here’s why

I just woke up to Gavin crying


Before going to bed, I spoke with my Mom to once again thank her and my Dad for all their continued support.  It’s something I can’t tell them enough…their words not mine….  I’m just kidding..  They would never say something like that.

Seriously though, after speaking to my Mom about how much I appreciate them, I let her know that Gavin went to bed, not doing very well.

He began complaining of reflux, shortly after going to bed.  I gave him some Tums and a glass of milk, which usually helps.  A bit later, he came back down feeling like he was going to puke.

This all happened after his IVIG infusion. It could just be one of those fluke situations where he’s hit by side effects but with all the illness in the house, I’m not making any assumptions.

It’s important to understand that Gavin never gets sick, which is both ironic and a testament to lengths I go to keep him healthy…  When it comes to puking, if he even sorta thinks that he needs to vomit, he will end up making himself vomit, even if he doesn’t really need to. That will set into play, a chain of events, leading to him hugging the toilet for the rest of the day. He’s always been that way.

Aside from the unpleasantness of the physical act of vomiting, it can very quickly become a life threatening situation for Gavin.

In a nutshell, vomiting throws off his very delicate fluid balance.  He can rapidly dehydrate and any of these things can easily lead to an autonomic crisis, which is a life threatening situation that would likely require hospitalization. 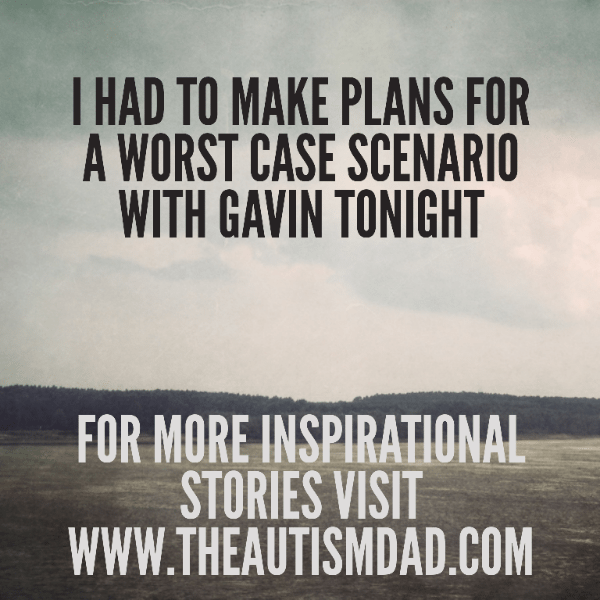 This has happened many times before but not recently.

It’s easy to forget how fragile his health is because he’s been so stable this past year and a half but complacency is not something I can afford to have in this type of situation.

This isn’t an overreaction either, it’s potentially that serious.

Anyway, I explained that I gave Gavin his Zofran and that should settle his stomach but if he does vomit, he may need to get to the hospital and I would need to have someone here with the boys.

The way he’s sleeping, I think he’s going to be fine but I need to cover all my bases, just in case.

Of course, they will help out in any way they can and will stay with the boys if need be, I need only call.

Having a plan in place, helps me to feel better equipped to face these things on my own because on my own is a scary thing.   It may seem silly or overreactive to some but when you’ve seen your child barely hanging on to life, as a result of one of these unpredictable autonomic crises, you learn very quickly not to take any chances.