If you missed the first update on my physical health, you can read that HERE..

My war on Depression…

I mentioned in the previous post, that some changes are being made to my treatment plan and I wanted to explain because I feel it’s really important that we speak openly about things like Depression, as there’s nothing to be ashamed of.

The only real changes that are being made to my treatment plan at this point, are in regards to the medications I’m taking to help me manage.

Prior to Buspirone, I was on Wellbutrine but I felt what I thought were uncomfortable side effects, such as elevated heart rate.

There was also an issue with the Buspirone as well. In the few months I was on Buspirone, I put on 15 lbs.  That wasn’t helping matters and so we decided to remove the Buspirone and move back to Wellbutrine, which is a better fit and can actually help with weight-loss. 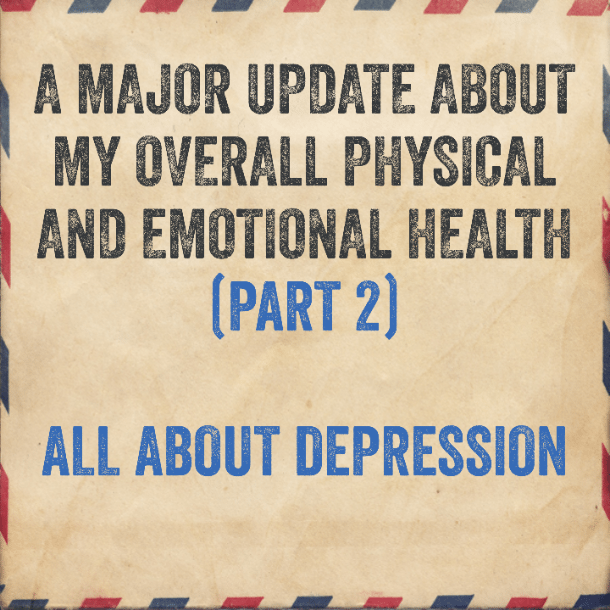 Unfortunately, I can’t make the change until the first week of June.  It’s an insurance thing and there isn’t any way around it.

That being said, once the switch is made, it will take some time for the Wellbutrine to really take full effect.

I feel pretty good about this and I’m hoping to see a positive change.  Medication is just one part of this war with Depression.  Diet, exercise and counseling are important parts as well.

The overall goal is to get to a point where I’m managing my Depression with exercise and therapy.  I’d eventually like to get off as many medications as I can but I’m in no rush.

I really hope that my speaking so openly about my war with Depression, will encourage others to do the same.  There’s no shame that should be associated with talking about Depression and I’m open to answering any questions I can, to either help you better understand or feel less alone.  😊