#Resist @realDonaldTrump: I'm taking a stand for what I believe is right and here's why -

Way too much shit going on this week

7 reason I know Emmett’s in a fever cycle

#Resist @realDonaldTrump: I’m taking a stand for what I believe is right and here’s why


I’m using my platform, to help take a stand for something I believe very strongly in. I want to make a few things very clear, so that there’s no confusion about where I stand on this issue.

I stand firmly against Donald Trump, and everything he stands for. This isn’t about party loyalty, because I’m a registered republican, and have been my whole adult life.

This is isn’t about Hillary Clinton, or any other candidate for that matter, not winning the election. Frankly, I don’t care who’s in office, so long as they represent our country’s values, with the dignity befitting someone in the role of President of the United States. They need to cross party lines and work together for the betterment of our country, and it’s citizens.

It’s become very clear that Donald Trump is not someone who can be trusted. He can’t seem to tell the truth, about anything. He lies about the simplest things that are known, indisputable facts.

He bullies those around him, degrades women, and makes fun of people with disabilities. He denies Climate Change and is destroying our relationships with our long time allies.

I could go on about how his new health care bill is going to be horrible for special needs families, and people with low incomes. I could quote every hateful thing he’s tweeted, or every known falsehood he’s tried to push on the American people, but I wont. You can find the facts pretty much everywhere, and they will contradict Donald Trump’s words, almost every single time.

I’ve decided that this is important enough, that I need to speak openly about it.

My approach to being part of The Resistance, is very simple.  I stand against Donald Trump’s behaviors, words and actions. I stand against hate, racism, bigotry, islamaphobia, and white supremacy.

I’m tired of having to explain Donald Trump’s actions to my kids.

America is about equality, regardless of faith, creed, sexual orientation, or ethnicity. America is about setting an example for the rest of the world, and standing beside those too weak to stand by themselves.

America is also about respecting our differences. This means that you can totally disagree with some or all of what I’m saying, and that’s okay. We don’t have to believe the same thing, to get along, or even be friends.

I don’t care who you voted for, or whether or not you agree with me. It doesn’t change my beliefs, and our differences don’t change the way I see you.

We all have the right to our own opinions. I respect yours, and I ask that you respect mine. We also have the responsibility, as Americans, to stand up for what we believe is right.

I may share my thoughts from time to time, but please know you never have to agree with anything I say, to remain a reader of this blog. The current political climate, is not looking good for Autism families, and families with special needs kids. This needs to be in the spotlight.

More than ever, I believe it’s important that we put party politics aside, and focus on what’s right, just, and morally sound. 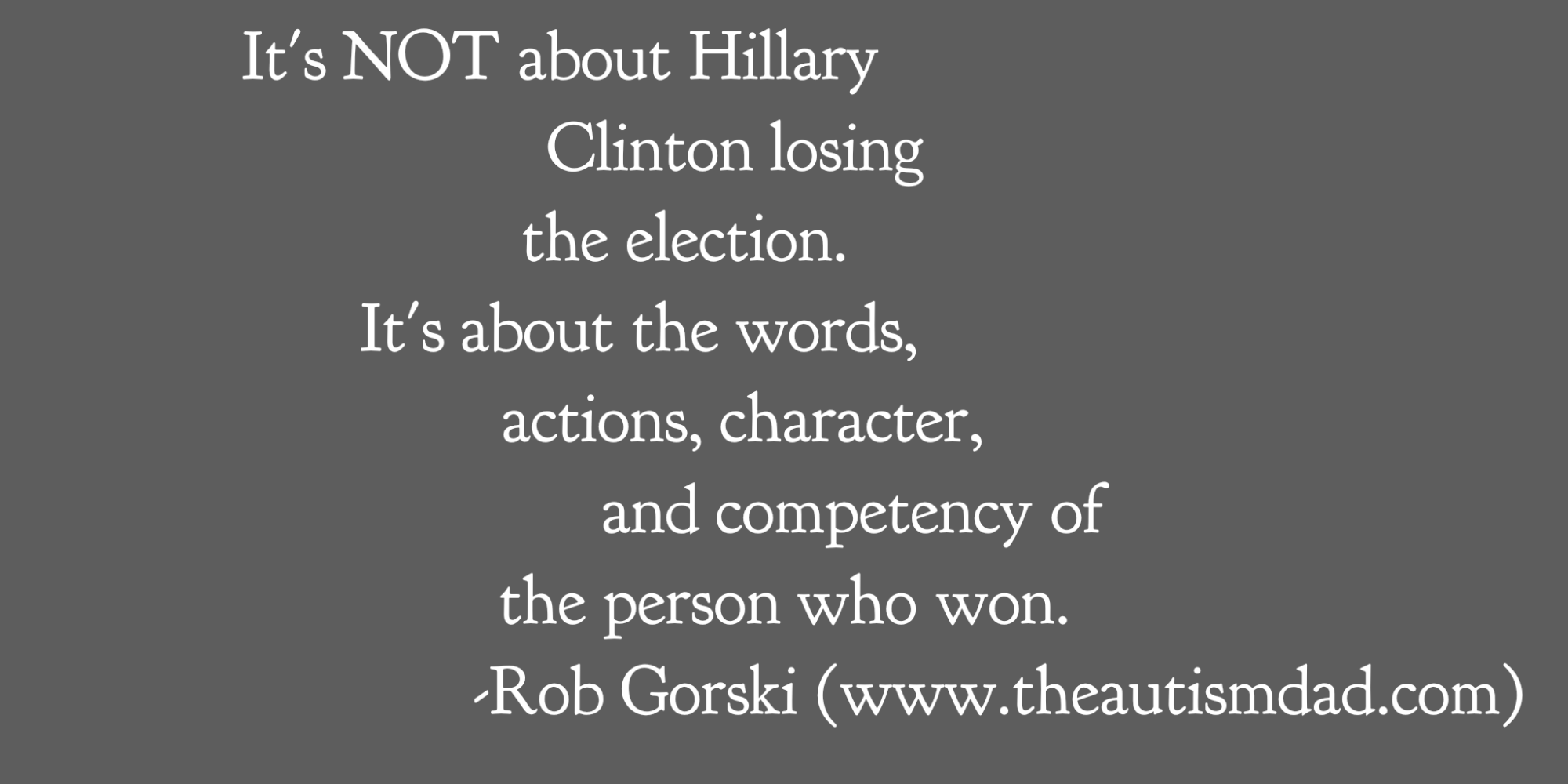 Good for you Rob. I don’t see how anyone who is disabled, or has a disabled loved one, can support Donald Trump. Although I have a disabled friend who does support him!

I don’t see how anyone who has a wife, sister, girlfriend, mother, aunt or female friend in general, could support him either. I’m right their with you.

Good for you Rob. I don’t see how anyone who is disabled, or has a disabled loved one, can support Donald Trump. Although I have a disabled friend who does support him!

I don’t see how anyone who has a wife, sister, girlfriend, mother, aunt or female friend in general, could support him either. I’m right their with you.