Something Gavin brought up during his visit with Dr. Moodley in Pediatric Neurology, had nothing to do with why he was there.

Dr. Moodley was trying to involve Gavin in as much of his health care as was possible. Clearly it’s not possible but I like that he tried anyway.

When asked if there was anything bothering him, meaning anything Dr. Moodley deals with, not just anything, Gavin replied with an answer that has me worried.

One of the things that we have to be very careful with in regards to Gavin being Schizophrenic, is watching for signs of paronoia. The only step beyond Schizophrenia is Paronoid Schizophrenia. That’s not a good step at all for those keeping track. 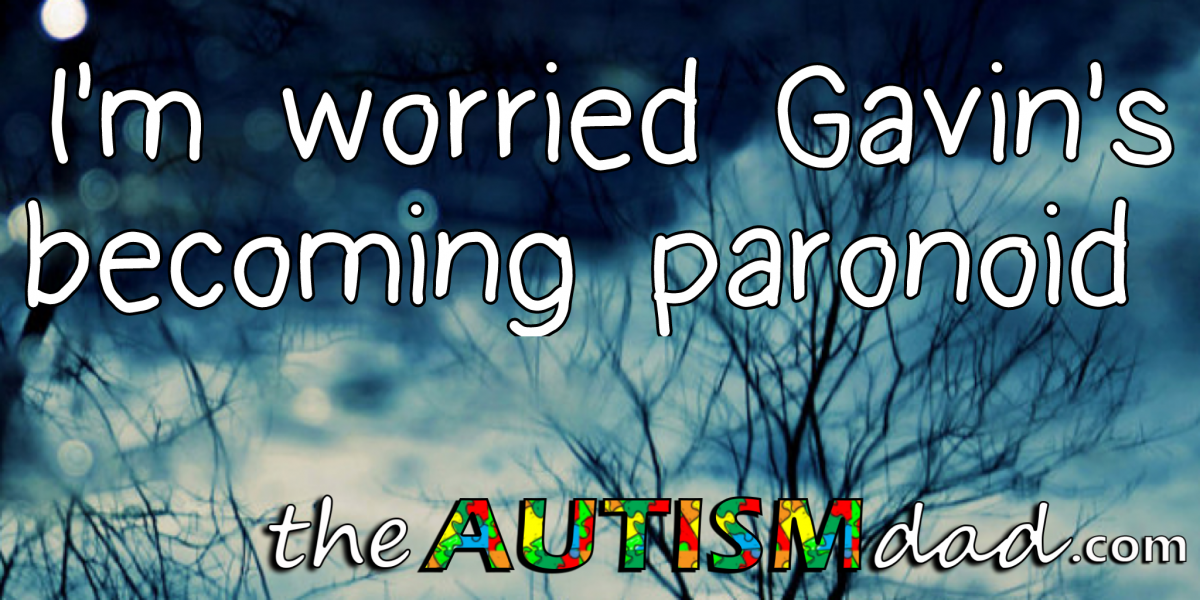 When asked by Dr. Moodley if anything was bothering him, he told him that he’s always getting scary thoughts. When asked about the scary thoughts, Gavin explained that he’s frequently thinking about the house burning down. He’s then shared that he’s always thinking about people close to him getting hurt. He was referring to us and the boys. He was also referring to us being shot or stabbed.

I’m not sure what to make of that. On one hand, we live in a bad neighborhood and his fear is somewhat understandable. It could be as simple as that or it could be that he’s becoming more paronoid. It’s so hard to have any accurate idea of what’s going on in his head because he doesn’t express himself well at all.

I wouldn’t put much thought into this if it occurred in a vaccum. The problem is that it’s not the only concerning issue that’s recently come up. The voices are back and he keeps hearing people call his name. They have also convinced him to incorrectly change the way he takes his medication. Ironically, or maybe not so ironically, the medication in question was his anti-psychotic.

We’ll have to talk to his Psychologist on Tuesday and get her thoughts.

Gavin said that he can’t stop thinking about this but that doesn’t necessarily mean the same thing to him that it does to me.

When it comes to figuring out where Gavin’s coming from, it’s extremely challenging because he assigns incorrect meanings to common words and having a conversation that doesn’t serve to make things even more confusing, is very difficult.

My son is 11, diagnosed with ASD, ADHD, and currently receiving Psychiatric Evaluation by DOE .
He’s been on Respirdone two years now. I suspect schizophrenia but am also aware there’s many differential diagnoses.
His younger 9 year old brother has severe ADHD, and despite my strong gut feelings …has had 2 negative ASD testing results. He’s got anxiety, learning disabilities, and more…
But years of advocating hasn’t yielded successful results. Their elementary school literally launches full scale assaults that include delay tactics amongst many other strategies…takes advantage of my difficult situation..which includes my own adult diagnosed ADHD.
My dad, my oniy caregiver support, was diagnosed last year with RARE Frontotemporal Dementia. His behavioral symptoms have led to multiple incarnations and trips to the ER. My mother is now his caregiver.
I NEED to connect with other parents with similar experiences. I’m so isolated, living on Maui.

If I sound disillusioned by the system… it’s because I AM.
Trust me…I worked VERY HARD to earn the right to feel that way!!

Now though, adolescence is looking and the stakes are getting much higher.
Crisis level behaviors every day….
911 calls result in exasperating conversations with uneducated law enforcement. I’m afraid where this is going..
This single mother desperately needs HELP … YESTERDAY!