I don’t write much about Lizze, but not because there isn’t anything to say or I don’t want to talk about her. She has her own blog where she likes to share her own story and I totally respect that.

Sometimes however, it’s important to say something anyway because she plays an invaluable role in our daily lives and does so while facing significant challenges of her own.

For those that aren’t aware or maybe need a reminder, Lizze lives with severe chronic pain. She’s lived this way for countless years now and it absolutely takes a toll on her.

She’s struggled with migraines for most of her life and was officially diagnosed with Fibromyalgia, after extensive testing back in 2005. 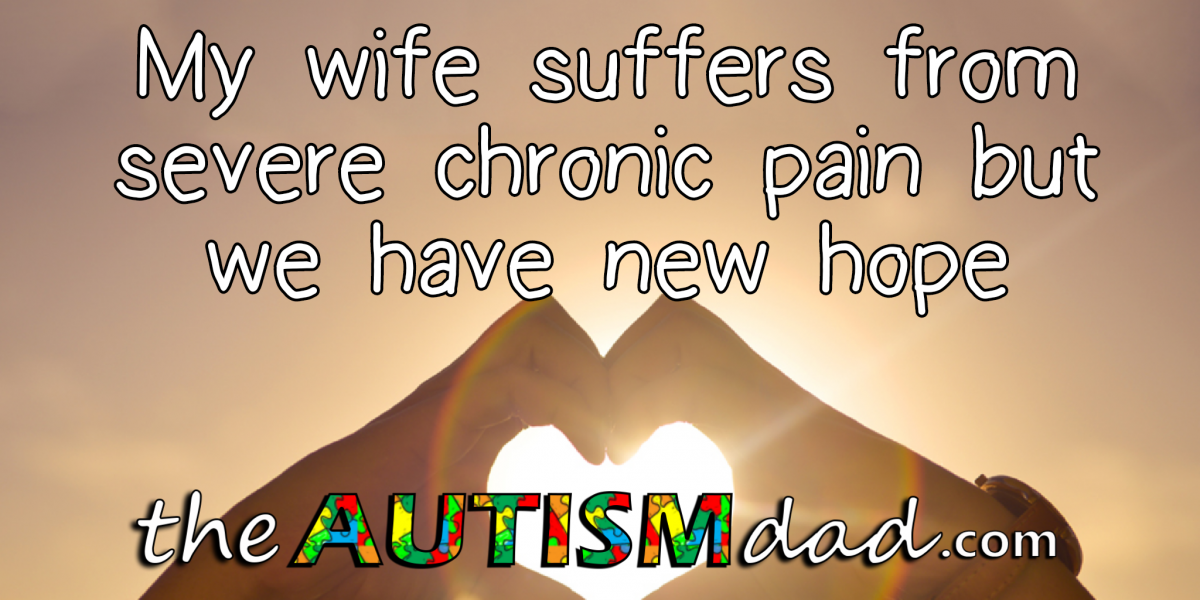 She recently described her pain by saying that every day she wakes up, is the worst day of her life. That was in regards to pain and not anything else. That absolutely broke my broke my heart.

Putting the Fibromyalgia aside for a minute, my understanding is that her biggest challenge is the migraine. She’s had an untreatable migraine for about six years now. That’s just an estimate but it’s also pretty accurate.

She’s tried every option, up to and including Botox, which only made things worse.

She’d all but given up hope.

While we were at Gavin’s Neurology appointment, his world class, Cleveland Clinic Neurologist took notice of how much pain she was in and has pointed us in the direction of possible relief.

Lizze had been to the Cleveland Clinic headache clinic many, many years ago. At that point in time, she was also in pain management. She was on pain killers but she only took them when it was absolutely necessary. After the very first appointment, the headache clinic wanted her to go to pain rehab but it wasn’t something covered by insurance and we couldn’t afford it.

Pain rehab would basically wean her off of her meds because they suggested that her pain meds may actually be part of the problem. Something about rewriting her pain receptors to interpret everything as pain.

For someone in chronic pain, the idea of removing the only thing that could provide relief, even if it’s only used when absolutely needed, can be a terrifying thought.

Not everyone on pain meds abuse them. Lizze would make a thirty day script last for three months because she only took pain meds when she couldn’t cope with the pain. I remember begging her at times to take her meds because it killed me to see her suffering.

Unfortunately, the headache clinic couldn’t help her until she went through this pain rehab and was completely off of any pain killers or migraine meds because they needed to sorta reset her pain receptors.

After that, they would then find medications that would be a better fit.

They seemed to require this because many people that came through were using pain meds constantly and until they were off of them, they were limited in their ability to help. That was my understanding. Lizze was sorta lumped in because they had no way to verify how much or how little she took pain meds.

Even if we could have afforded pain rehab, the idea of being in so much pain and never having pain meds to fall back on was terrifying.

Her current Neurologist ran out of options when Botox, a last ditch effort, made things worse and referred her out to someone we were never able to get in to see.

Fast forward to this past week and a couple of things happened.

I read an article in the NY Times about a new medication for people who’ve suffered from untreatable migraines and it’s been very much successful. The medication had literally been approved and released that week.

When Gavin’s doctor asked her about her migraine, I showed him the article and asked about the new medication. He was aware of it and shared that there have recently been quite a few breakthroughs in migraine treatment and he referred her to another doctor at the Cleveland Clinic that could help her. Actually, he said pretty much any doctor in the headache department would be able to help her.

On the way home, we made the appointment but unfortunately, it’s not until the end of August. There aren’t any cancelation lists but if we call back a few times a week, we can snag an eariler appointment if there are any cancelations.

Years have passed since the last time we’ve been there. She hasn’t been on anything heavier than Motrin for many, many years. That makes her more of a blank slate.

We are holding out hope that one of these new medications will be a good fit and she can finally find some relief from her constant pain. Hope is something many people in chronic pain have little of. We have to find ways of providing these people with the comfort and relief they deserve. I know the Opiate crisis is a nightmare. Maybe if we spent less time trying to make money by pushing addictive drugs and instead search for alternate methods, we could help people without hurting them.

A mattress is not going to solve the chronic pain but there a chance it can help. Here’s a list
of mattresses designed for back problems.

This is good news! I do get migraines but compared to Lizze’s they are nothing. I can’t imagine having to function with so many. Tell Lizze I’m so glad! (And I can try to make it to her blog too.)

I’ve only ever really had one bad migraine and that was actually probably borderlone heat stroke. Everything is relative though. We all deal with pain in different ways. I will pass your kind words along. Thanks Becky

Has Lizze ever tried, or have you ever explored Cannabis treatment? I’ve heard it has done wonders for people who suffer from migraines and also for those with fibromyalgia.