Worst Day Ever - Maggots, ice and a basement full of sewage -

This goes in the win column

Worst Day Ever – Maggots, ice and a basement full of sewage

I’ve been a bit overwhelmed since yesterday evening and I haven’t written. I wanted to take a minute and vent because I’m on the brink of insanity.

We went to the Farmer’s Market yesterday and if you follow me on social media, you already know the nightmare that brought with it. The Farmer’s Market is an amazing place. Our goal is to eat healthier and do so in a way that’s affordable, while supporting our local community.

Our haul was impressive. Here’s everything we got for about $60:

I can’t remember the rest but suffice it to say, it was worth the trip. We did note that everything is more expensive on Saturday’s than Monday’s, so we’re gonna switch back.

Anyway, on the way out, we bought some snacks. Lizze, Emmett and Elliott picked out freshly made brownies. Gavin and I picked out a cookie.

Everyone finished their snack before we left, with the exception of Emmett. He wanted to save some of his for later. Not a big deal, in theory anyway. I said in theory because later that afternoon when Emmett went to unwrap the remainder of his brownie, he was greeted with a very unpleasant surprise.

If you’re asking yourself if that’s a maggot, it is. That’s a maggot. It’s been in there for a little while because you can see where it had been living and the sorta slime trail it left as it burrowed through the brownie.

Emmett was horrified/relieved because while there was a maggot in the brownie he was eating, he didn’t eat it. 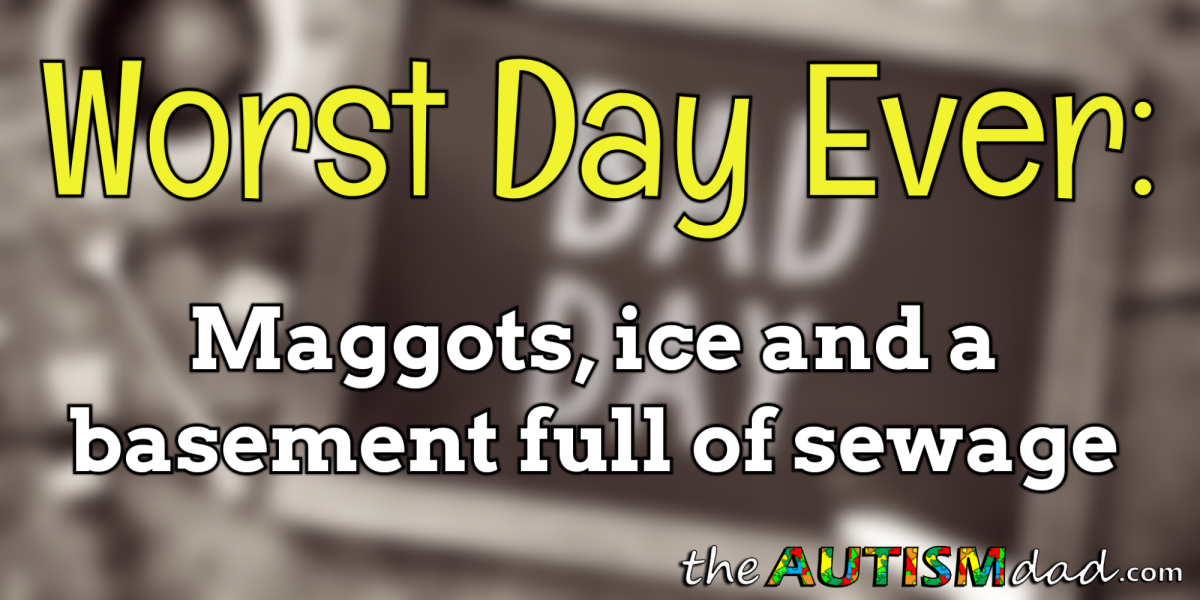 Elliott and Lizze are absolutely horrified because all the brownies came from the same place and they had already eaten theirs. They have no idea if they actually ate maggots or not. That was lots of fun in an OMG I’m gonna puke kinda way.

When we got home from the Farmer’s Market, we immediately began washing all the fruit and veggies we bought. As we began loading them into the refrigerator, we noticed that literally everything in the fridge was covered in water. There was standing water on all the shelves and drawers. Some of the food was ruined and some had to be thrown away.

I spent a few hours trying to figure out where the water was coming from.

It was eventually discovered that the water was coming from the freezer. Basically, on a frostless freezer, there’s something that actually melts the ice as it begins to build up. The water is supposed to drip into a hole and drain into a drip tray underneath the fridge.

Ours is fairly new and there was a second drip tray in the light housing on the inside of the refrigerator. That had become clogged and so all the water overflowed into the refrigerator, destroying some of the food that was in there. It could have been much worse, so I’m super grateful for that.

I tore everything apart and made sure all was working before putting all the food back in. Unfortunately, while the leaking has slowed considerably, it hasn’t stopped and I have no idea why it’s still happening. It shouldn’t be but it is. Before I could dig back into that and take a second look, something else happened.

A bit later on, we had another problem that would turn out to be an absolute nightmare.

We began noticing what smelled like sewage but couldn’t figure out where it was coming from, until we ventured into the basement. To my horror, our basement was flooded. It wasn’t just flooded with water. No way, that would be too easy. It was flooded with sewage. There is about two inches of standing water in our basement and things floating in that water that made it about a million times worse. I’m going to spare you the pictures as I’m sure the mental images are bad enough.

Whatever happened, occurred sometime yesterday afternoon because we were down there in the morning and all was fine.

It’s awful and I mean awful.

I spent hours trying to find a 24/hr plumber that would fix things last night. I managed to find one and I anxiously awaited their arrival. Unfortunately, they called a few hours later to say they were overbooked and they couldn’t come out until Monday.

When the sewage backs up, you can’t use any water in the house. Anything that drains will end up on the basement floor. This includes the toilet. It’s been about 15 hours since we’ve been able to flush the toilet.

I was able to book someone for this morning and they are currently working on it right now. It doesn’t appear to be going well and the smell is unbearable. We’ve opened all the windows and that’s helped a bit.

This is just too much for me right now. We can pretty much kiss our budget for this month goodbye, as it’s been thrown out the window. I’d say it was flushed down the toilet but as I explained eariler, that would mean it’d be floating among the nastiness in our basement.

We’re supposed to be heading out of town to visit my grandmother for her birthday. I have no clue what we’re going to do at this point.

I’m trying to remain positive but it’s just not a good day.

Ugh. What’s that saying, “when it rains it pours”