The return of Gavin's meltdowns -

Describe what sleep means to you in one sentence

The boys and I had a little mission today

The return of Gavin’s meltdowns

Gavin’s really starting to struggle once again. Behaviorally he’s doing quite well but his level of function is declining and it’s not hard to notice.

He’s not hearing the thing s that are being said to him and his threshold for frustration is extremely low at this point. That means that he get frustrated very easily.

As an example of what I mean.

Gavin was wiggling back and forth on the couch. This is basically his version of the potty dance. I simply asked him if he needed to use the bathroom and he jumped up and got very upset. 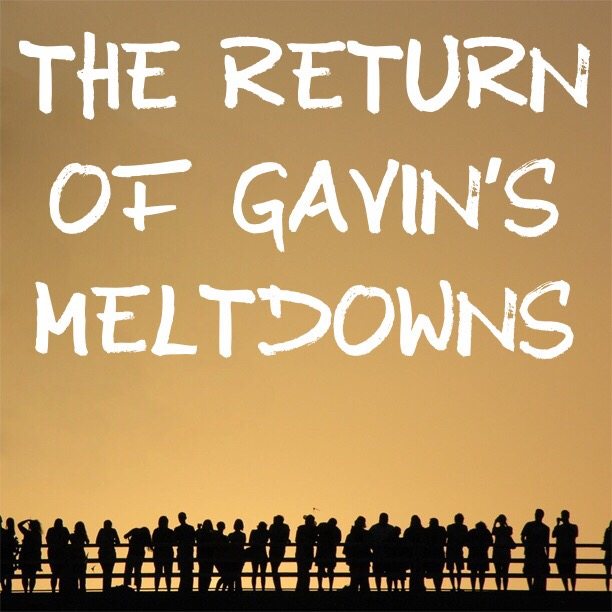 He made his body very stir and started bending his fingers back to the point where I’m amazed he didn’t snap them off. Then of course, there’s the stomping and this is where he will bend his feet at the ankle so that he’s actually standing on his ankles instead of his feet..

This has historically been a precursor to a more violent, full blown meltdown. Honestly, this was a meltdown but it was relatively mild for him and he was able to keep himself in check. I give him a ton of credit for that because it’s not easy for him to keep his cool, especially when he’s that frustrated.

Anyway, you would think by his reaction that he was mad because I asked him if he needed to use the bathroom. That’s not the case.

He was frustrated with himself for not telling me he needed to use the bathroom. That’s what he said anyway.

I told him that he never needs to tell me he has to go potty. All he needs to is get up and walk to the bathroom. I’m not sure why he’s so upset it was definitely a triggered response and his fuse was short.

After he went to the bathroom, he was in a slightly better place but he was still really tense.

I think that this bladder thing he has going on is really starting to get to him. Unfortunately, there doesn’t really seem to be anything else we can do, aside from stop the Clozapine, which is believed to be behind this new bladder thing.

There’s no infection and while it does seem more prominent while he’s in the car, it’s happening throughout the day, regardless of where he is or what he’s doing.

I’m goin to call the Cleveland Clinic and get him into Urology for a full work up. If we can rule out everything else, than it will either be a side effect of the Clozapine ( which a rare but documented side effect) or it will be a new symptom of his autonomic disorder.

Frankly, I’m not sure which would be worse.

If it’s the automatic disorder, than that means it’s a new symptom and that the condition is worsening. That’s definitely not good.

There has to be something that can be done to provide him with comfort as well as quality of life. I haven’t yet found that solution but I won’t stop looking until I do…

I do pray that you find the answers.

This may be TMI, but I have family members who have problems fully emptying their bladders. They usually stay in the bathroom for a few minutes after they are “done” until they can go again. They also recommend holding a wet, warm towel against their stomach while at the toilet if it feels like more is there but won’t come out.

He’s had several. This is a biological condition with little or no treatment.. He does have epilepsy as well but hasn’t had a known seizure is forever…

Does he need an EEG? His neurology sounds way out of whack.