How did the kids do on their first day of school?

Here’s what happened at the pediatrician yesterday


First of all, I’m sorry for the less than frequent updates over the last few days. With school starting and a few other things going on, I’ve been distracted.

I don’t think there’s a day that goes by where I’m not worried about Gavin for one reason or another.

Yesterday, he told me that he still sees Sonic and that he’s never gone away. He told me that he just didn’t talk about him because his brothers were always home and he knows it’s confusing for them.

On one hand, I’m touched by the fact that he’s cognizant enough to handle it that way, assuming that it’s actually true. 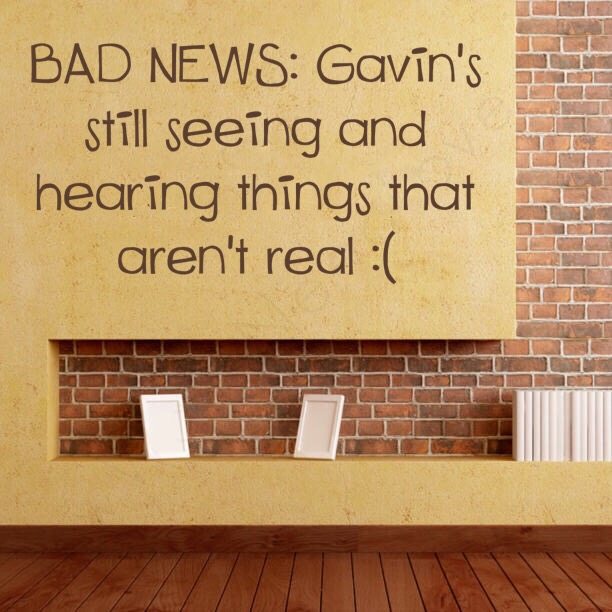 On the other hand, I’m worried because the fact that he’s still hearing and seeing things that aren’t real, means his meds aren’t working.

I truly don’t know what to think because he’s been very engaged this summer and I would not have suspected that he was still seeing these characters.

The other thing that makes me question what he’s telling me is that Gavin has very little impulse control and I find it difficult to believe that he would be able to successfully hide this from me for this long.

I don’t doubt his concern for his brothers but I just don’t know what to believe about this.

This was a topic tonight at his appointment with Dr. Pattie and we aren’t really sure how to proceed.

If these things are back or indeed never went away in the first place, that means the Clozapine isn’t working and that it either needs to be increased or it’s not going to work since we had to start over again about a year ago.

The idea that it’s not working is truly scary because he may be suffering serious side effects (the bladder issues) from the Clozapine and it’s  all for not.

I need to call Dr. Reynolds in the morning and try to get an appointment.

For those that don’t already know, Gavin is diagnosed with Schizoaffective Disorder. Think of it as kind of a blend between Bipolar and Schizophrenia.

This hasn’t been easy to manage and when not properly medicated, he ends up in the psych unit at Akron Children’s Hospital.

Clozapine is the end of the road medication while there are some new medications available, they aren’t very likely to work.

I’m holding out hope that we can manage this without serious complications.

Deep breath. I’m so sorry. If they’re there fleetingly.. Or he’s able to process not to engage with them… Maybe? I want to say something totally encouraging but I’m sleepy and my brain isn’t firing. So.. I’ll leave it at ::virtual hugs::

Deep breath. I’m so sorry. If they’re there fleetingly.. Or he’s able to process not to engage with them… Maybe? I want to say something totally encouraging but I’m sleepy and my brain isn’t firing. So.. I’ll leave it at ::virtual hugs::