Do your kids with #Autism act like this when they're sick? -

I’m a Daddy on the verge of losing his mind

Special Needs Parenting shouldn’t be a one parent job

Do your kids with #Autism act like this when they’re sick?

In order to preserve my sanity or rather what’s left of it, I’ve decided to give up on trying to contain/redirecting my kids insane amounts of energy today.

All day I’ve been after the boys to rest.

While Emmett’s running a low grade fever, he’s driving me absolutely crazy because I can’t slow him down. 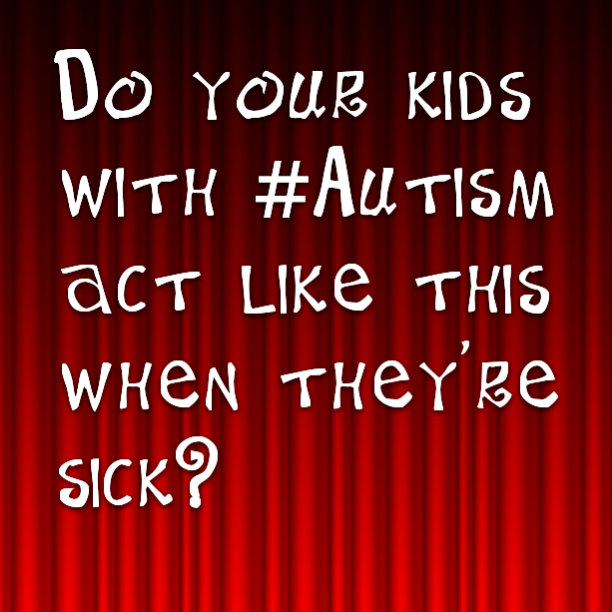 Rather than indulge my urge to run away and join the circus, I’ve decided that I’m just going to focus on physical safety.

If he’s doing something dangerous, I’ll deal with it but trying to slow him down or contain his energy is a huge waste of time and energy because it’s not working.

Kids on the Autism Spectrum tend to have atypical reactions to things, including being sick.  Your mileage may vary but that’s been my experience over the last decade or so.

My Son who is 4 and autistic. He has many qualities that are typical of autism and many that are not typical of autism. I find it hard to find a balance, because he will have a normal reaction to things. When he was younger and sick or hurt he would just cry, but as he has gotten older he will tell me where his “Boo Boo” is. When he is sick, such as a belly ache or constipated, he will hold his belly and whine. He had a virus before and was vomiting and had diarrhea and was needy and wanted held a lot. He wouldn’t tell me when he was going to vomit though, but I noticed that he would make a whining noise and open his mouth and drool a little. When he has a fever he isn’t full of energy, but acts lethargic with a normal behavior. Hopefully this helps! So many children on the spectrum have different qualities.

That’s great observation. We have to be detectives when it comes to our kids sometimes. Nothing comes easy, with the exception of loving them… ☺