This was the worst morning in many, many months

A major update to where things stand with my divorce

This was the worst morning in many, many months


I think that everyone slept pretty well last night.  I woke up with Emmett wrapped around me and at some point, he got up and didn’t go back to bed.

Gavin has therapy this morning and so I already knew I would be pressed for time. 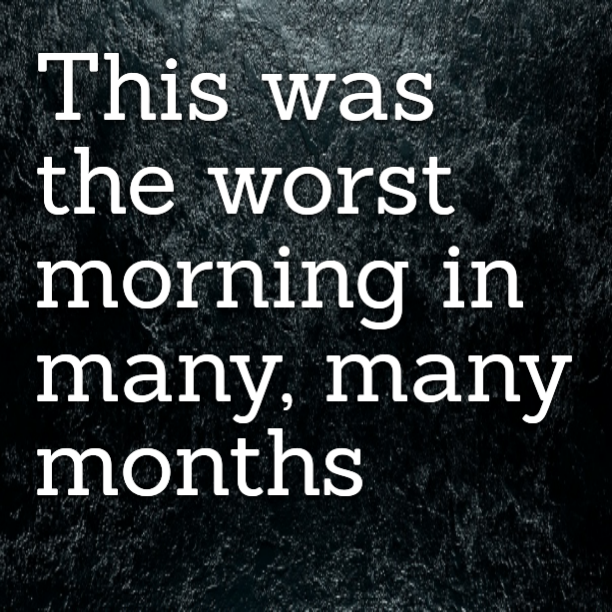 When I woke up, I found Emmett hiding under Elliott’s bed and that’s when the screaming began.

Emmett just melted down all goddamn morning.  I have no idea what set him off but he wanted nothing to do with school and there was no talking him down.

I don’t know if he was just so worked up that his body temp was higher because I really don’t think he’s sick.

Best case scenario is that he’s emotionally overloaded from his extra long, midweek visit with his Mom, even though he had fun.

Worst case scenario is that he’s in a fever cycle.

Unfortunately, there’s no litmus test for either and so I did what I had to do in order to get Gavin to his appointment on time.

Emmett stayed home from school because with his temp, they would’ve just sent him home anyway.  He’s going to have to come along with us to Gavin’s therapy, which is only 30 minutes long.

When we get home, he’s going to be spending the day video game free and resting.

I don’t know what else to do…but I owe it to Gavin to get him to his therapy appointment and I really don’t think Emmett’s sick.  I don’t doubt that he’s not feeling well but it’s nothing contagious.

Neither emotional overload or a fever cycle are contagious.