There are a great many things weighing on me right now.  To be honest, I’m being crushed.

A great deal has to do with everyday life things like providing for my kids, paying the bills and staying on top of the mortgage, of which I’ve fallen behind on.  These are the kind of things that lots of people face and while the circumstances surrounding these situations will vary, the impact is probably very similar.

Every single day seems like an endless battle of staying afloat and the weight of all these problems are doing their best to pull me under.

While these are all real problems, most of them have no viable solution at this point.  Dr. Pattie and I were brainstorming this week and every obvious answer creates another problem that doesn’t have solution.  Even thinking outside of the box doesn’t produce anything that will work either. 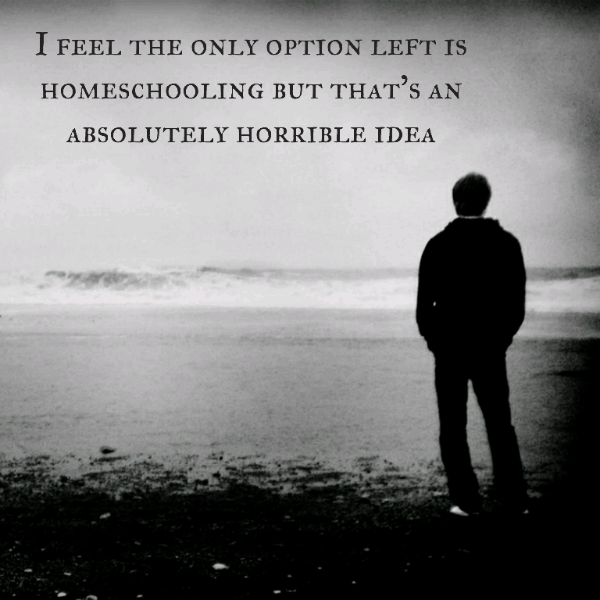 One of the big things we were brainstorming about has to do with Emmett and school.

This is one of the biggest weights I’m carrying right now and I have no idea what to do.

The problem is that Emmett suffers from a very rare fever disorder called PFAPA.  What this means is that Emmett runs fevers and there’s no physiological or medical reason for it.  In other words, he runs a fever and he’s not actually sick. (See PFAPA)

The long and short is that we have gotten to the point where the fevers are interfering with his ability to go to school.

I call them fever cycles because the used to show up about every 3 weeks and last for 10 days or so.  These cycles come with other symptoms and seemed to have subsided a few years ago.

Unfortunately, about a year and a half ago, they started back up again. The working theory at this point is that it’s triggered or exacerbated by stress.

When  they started back up, they weren’t very frequent but over time we’ve arrived at a point where he’s running a fever almost every single day and they are getting into the 102-103°F + range.  He’s not likely to actually be sick but there’s no way to know for sure and with a fever that high, he can’t be in school.

The schools policy is anything over 99.5°F requires the child to stay home or be sent home.  They’ve given us some wiggle room because they understand but they can only bend the rules so far and I don’t blame them.

Every solution Dr. Pattie and I came up with won’t work.  His specialist can document that he experiences frequent, idiopathic fevers but there’s no way for her to guarantee that these fevers aren’t attached to an illness every time.  Sometimes he’s actually sick.

The school could send someone out to the house but they aren’t going to if he’s running a high fever and I feel like I’d have to disclose the fact that he was.

I wish I could just write off the rest of the school year for Emmett and see how the summer goes but that’s not an answer.  We only have about 3 weeks left and I just want to say fuck it.  I’m so tired of this and it stresses Emmett out as well.

The only somewhat viable option is the worst one and that’s homeschooling him.  Dr. Pattie and I both agree that I’m already spread way too thin and that it would be a horrible idea.  At the same time, it solves the problem but like everything else, it just creates more on the backend.

He needs the socialization and he wants to go to school.  I’d be lying if I told you that there’s not a part of me that would love to work with him in that capacity because he just absorbs knowledge and loves learning.  It would a lot of fun but realistically speaking, it’s just not practical.  I’m only one person and I’m already struggling with the responsibility I have now.

I’m at a total loss.  Emmett’s support team is at a loss. No one knows what the fuck to do and that’s a truly helpless, bordering on hopeless feeling.  I need to talk to his main specialist again and have a very serious conversation about how to proceed.

I need guidance because I feel like I’m on a plane where something has happened to the pilot and I don’t have the first clue how to keep us from crashing.

I’m crumbling under the pressure right now and I don’t see a light at the end of this tunnel that isn’t going to be a speeding train.