You can read part 1 of this post by clicking HERE

As I said in the previous post, trying to figure out what’s what when it comes to kids on the Autism Spectrum, is not easy.

Trying to figure out what’s triggering certain behaviors or causing distress is sometimes a guessing game because my kids can’t always just say what’s bothering them. It’s not that they don’t want to either.  It’s that they don’t know how.

They’ve been through a very traumatic life change.  Kids in general struggle with divorce on a good day. When you have kids on the Autism Spectrum, it’s often times much more difficult because of the way they perceive the world.  Cognitively they may understand but emotionally, there’s such a developmental delay and they simply can’t begin to process this kind of thing.

It takes a lot of time and a lot of therapy/work/patience/stability/consistency/love/understanding to see them through something like this.  Even with all of those things and more, there’s no way to know how it will impact them long term or if things will resurface at a later date.

That’s the root cause they internal distress, at least in my opinion. They have many other stressors in their life but none that were that Earth shattering for them.  It tough because it’s not like they take one thing at a time, process it ans move on.  Everything just piles up ans pretty soon, they are so overwhelmed that anything can cause a behavioral change.

Like I told Dr. Pattie tonight, I don’t think seeing their Mom is the problem.  Seeing her is a much more positive thing for them now than it used to be.  They have fun and rarely come home upset about anything that did or didn’t happen.  Jumping to that conclusion would be incorrect but understandable. 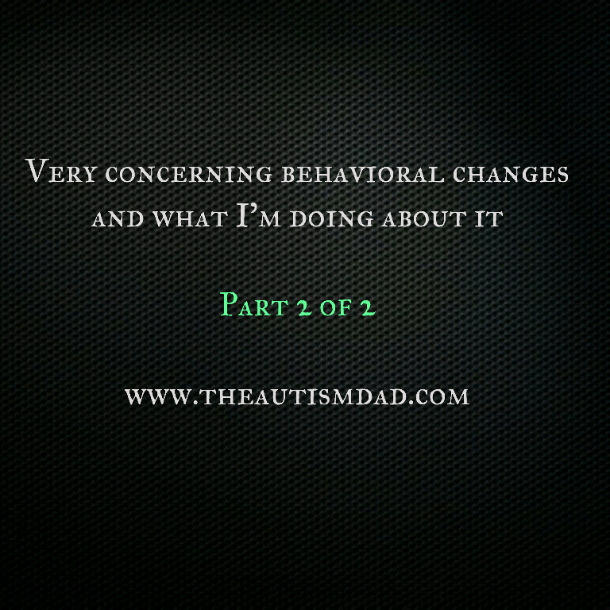 The core issue for them is the situation as a whole and the life altering change they’ve had to endure. There’s nothing that can be done about that.  It is what it is and it’s not going to change.  It’s not something I have any control over and in many ways, the boys and I are in the same boat. This is an enormous change for them and while it will be 2 years in October, they still have a great deal of healing to do.

The type of healing I’m talking about is more beneath the surface and something they may not even be aware of.  On the surface, they’ve adjusted and moved forward.  Beneath the surface they are struggling.  While they can’t say hey Dad, this is really bothering me, it shows in the behavioral shifts we are seeing.

They are grappling for control and are trying to cope in unhealthy ways but the only way they know how.

This is going to take time and my job is to be there for them in any way they need me.  I have to keep them moving forward and working on healthier outlets or better ways of coping.

I’m doing that.  Elliott’s started writing and that seems to help him in some ways.  Emmett’s got his hammock swing that he lives in.  When I swing him, it seems to help him find peace and even if it’s a temporary peace, it’s something.

Going forward, I think learning new coping skills and finding ways to help them express themselves in constructive ways. This is going to be challenging because everything is dynamic and volatile.  The water is easily muddied but this is something we have to overcome..