As if life wasn't already hard enough, it seems the voices are back -

As if life wasn’t already hard enough, it seems the voices are back

Last night, Gavin came downstairs after being in bed for a couple of hours, mumbling something about a glass of water and claiming to be wheezing. He was heavily sedated and that’s not necessarily normal for him. With no changes having been made to his meds, there shouldn’t be any change to the way they impact him.

This morning, I mentioned to Lizze that something wasn’t right last night and I wonder if he’s taking his medication, specifically his Clozapine, correctly.

We were prepared to write if off as a one off event and move on.

Right about that time, Gavin came downstairs and I asked him about last night. As I suspected, he didn’t really remember what happened. I then took the opportunity to ask him about whether or not he’s taking his medications correctly. I specifically wanted to know how he was taking his Clozapine.

He said he was taking them both at night. I asked how long he’d been doing that and why he made the change. He’s supposed to be taking one Clozapine in the morning and one at bedtime, because otherwise he’s too sedated to function safely. Last night was a perfect example of why we do not have him take both at the same time.

It’s concerning that he’s taking his medication wrong but the why is even more concerning. 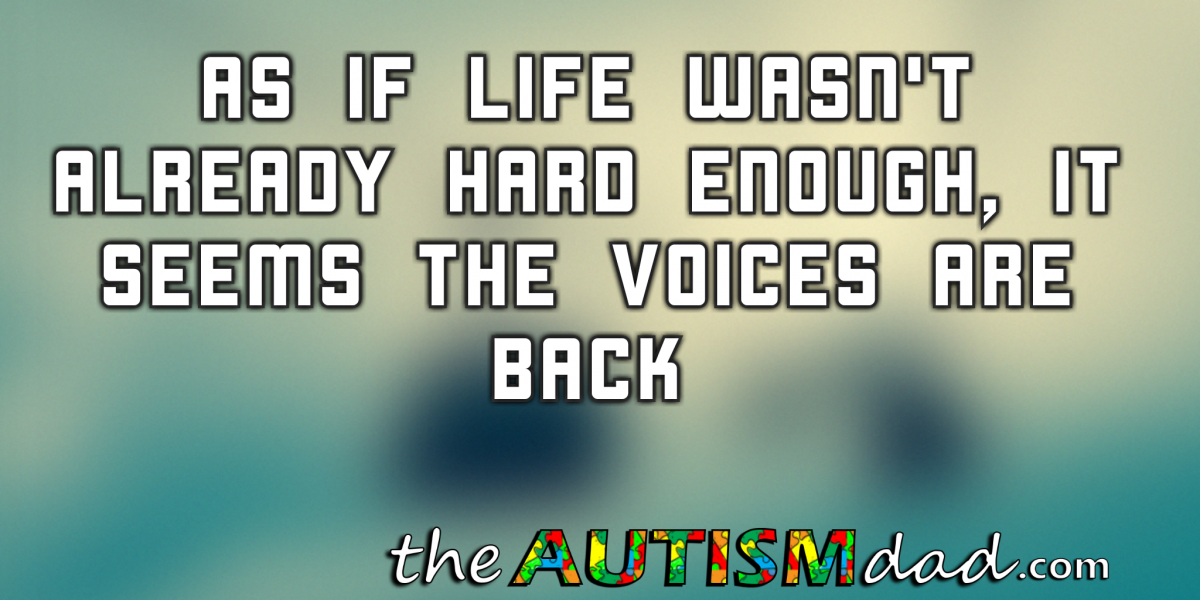 Gavin explained that we told him to start taking them both at night.

Why is this deeply concerning?

Neither Lizze nor I have told him to do that and if it wasn’t us, than who was it? It wasn’t a misunderstanding or miscommunication either because Gavin swears up and down that he heard us tell him to make this change.

I’m not sure what to do with this because how can we counter the voices in his head? Ironically, the medication in question is an antipsychotic used to treat the symptoms of Schizophrenia. Clozapine is what limits his Schizophrenic hallucinations. The tricky thing is ensuring that Gavin doesn’t follow instructions from the voices he thinks belong to us but rather ensure he follows directions that actually come from us.

This event has brought to our attention a very serious problem. We had thought the voices were no longer speaking to Gavin but it appears we might have been wrong.

We’re going to have to devise a safer method of ensuring he correctly takes his medications. My first action on Monday morning will be to reach out to Dr. Reynolds and find out what we should be doing. For the moment, we will have to go back to distributing his meds to him.

As if life wasn’t already hard enough, it seems the voices have returned.

I’m so sorry. With hallucinations, often with Autoimmune Encephalitis or other conditions, they actually physically hear someone telling them this and think it’s real. My oldest son at his worst would say his father or I called him a name, when we didn’t and were both in the room with our kid together, so could vouch for this. So it can be slightly different than hearing voices in your head, but still hallucinating. I consulted actually with an adult with autoimmune encephalitis who goes through this herself, and the person suffering has no clue it didn’t really happen. It’s pretty scary. Glad you caught it. Maybe also take a look to see if his immune markers have dropped or other signs he could be coming down some sort of infection, or if someone in your home is sick or recently been ill that’s a huge clue. With special needs kids with immune deficiency the psychiatric or neurological symptoms returning are sometimes the first sign of an infection- not sore throat or the normal symptoms kids with a working immune system get.

Thanks, Jane. Gavin has Schizophrenia and that’s where the hallucinations are coming from. He has serious immunodeficiency but nothing autoimmune. Good looking out though. 🙂