This is a interesting story that involves Emmett, his teachers and a six month old homework packet. The other day, one of Emmett’s teachers approached me right before school let out because she wanted to give me a heads up in regards to a conversation she’d had with Emmett that day.

She knows how Emmett struggles with communicating in certain situations and wanted me to know first hand, what happened so Lizze and I could reassure him if need be.

Back in January of this year, Emmett missed a bunch of school do to illness. There was a ton of makeup work and somehow, one of his packets never got turned in. All she did was ask him if he knew where it was and he told her it was done but he forgot to turn it in.

It was an honest mistake.

She simply told him that if it was done and he knew where it was, he could bring it in. If it wasn’t done or it’s been misplaced, he was told not to worry about it because it wasn’t a big deal and it didn’t impact his grade at all.

His teacher wanted me to know what was said because they know how Emmett will go home, panic, and end up melting down. 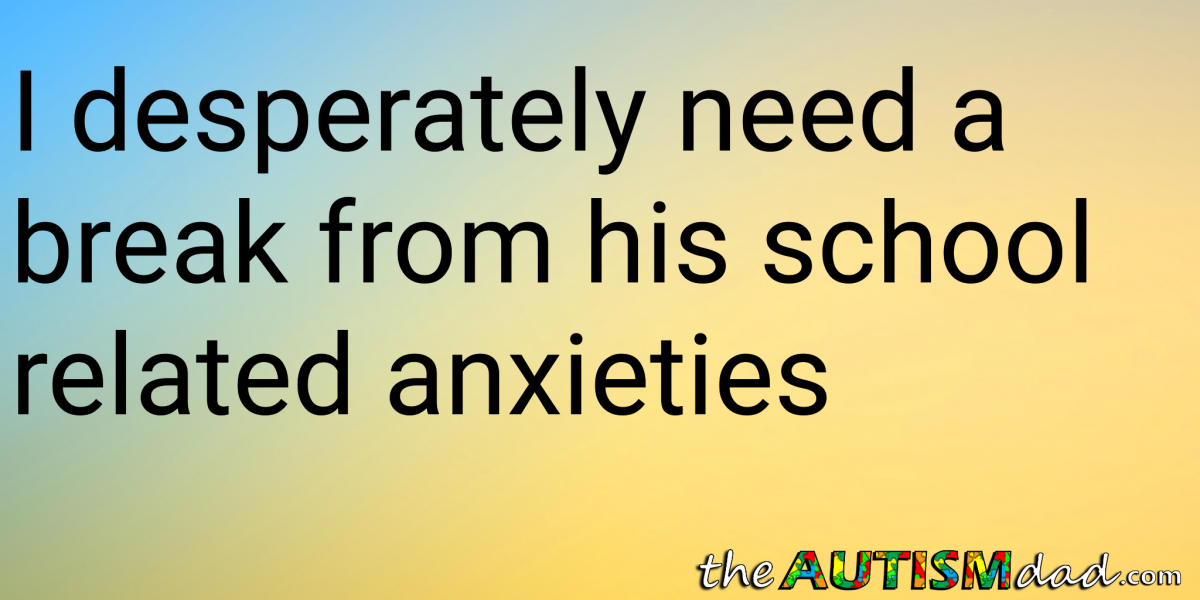 True to form, that’s exactly what happened. I felt good about it because I was armed with what the teacher said and I told him not to worry about it. Apparently, he’d not completed one of the pages and because he told his teacher it was done, he felt like he’d lied to her. He thought it was done but it was almost six months ago.

Emmett is honest to a fault, as most kids on the Autism Spectrum are, and refused to let it go because his recollection of the conversation with his teacher was different than mine.

We went back and forth until I finally told him to either finish the page or let it go. He was convinced that if he didn’t turn it in he was going to get in trouble. I reminded him he only had like four days of school left and it didn’t matter. I assured him he wouldn’t get in trouble and that his teacher said not to stress out over it.

Lizze and I managed to redirect him and he forgot about it until the following morning.

As we were getting ready for school, he rembered. He got so upset because it wasn’t done, that Lizze called the school and talked to his teacher. She basically told her the same exact thing she told me but Emmett wouldn’t hear it. She actually talked to him on the phone and told him it was okay and not to worry about it.

When Emmett got to school, his other teacher, unaware of the previous conversation from that morning, asked Emmett if he had the packet. He said it was not finished and it was at home. She knew how stressed out he gets and so she told him to bring it in and he could work on it at school. This was meant to make things easier on him, not add pressure.

That night, Emmett was freaking out again because he felt he was getting conflicting instructions about this six month old packet of homework. He didn’t know which directions to follow, panic ensued and a massive meltdown followed.

The next morning, Emmett was freaking out again because he’d left his folder at Grandma’s house the night before. Another honest mistake and one that absolutely didn’t matter. He was convinced that he would get in trouble because he didn’t have his folder or his paper signed. We gave him a new folder and told him it would be okay. Unfortunately, he wasn’t convinced.

Emmett is very literal and extremely rigid when it comes to following the rules.

The rule is, his folder goes back and forth each day. Lizze or I sign his paper showing that we went over everything inside and he takes it back to school.

I decided enough was enough. When I took him to school, I walked him in and we spoke with his super nice teachers. I explained that Emmett was worried about his folder and his homework packet. They both told him that everything was fine and he had nothing to worry about.

Emmett gave his unfinished homework packet to his teacher and that was the last he heard about it.

No matter what we did or said and no matter what his teachers said, Emmett was so incredibly stressed out over this homework packet. It’s one of those Autism related complications that we deal with all too often.

It’s very difficult to get Emmett to see anything in a way other than the way he sees it. It doesn’t matter if he’s misunderstood because he doesn’t always recognize that and will only be okay once he speaks directly with the person who provided him with the instructions.

Something that shouldn’t have even been on our radar in the first place, turned into three days of meltdowns because Emmett is so literal. Thank God we only have two more days of school left. I need a break from Emmett’s school related anxiety.

Question(s): if the homework packet didn’t matter and the teacher knows how things like this cause anxiety for Emmett, why even bring it up in the first place? Seems like 3 days worth of upset could have been easily avoided by simply not mentioning it.

In an effort to be understanding, the teacher was ambiguous. She shouldn’t have said anything this close to end of school.

Ideally yes, nothing would have been said.