Gavin had a heartbreaking meltdown yesterday -

Today’s been full of parenting challenges

Something I noticed after almost a year of sleeping alone

Gavin had a heartbreaking meltdown yesterday

I meant to write about this earlier but it somehow slipped my mind.

While we were at Dr. Reynolds office yesterday, Gavin got up to use the bathroom during our time with the nurse practitioner. This isn’t unusual because he’s frequently using the bathroom throughout the day.

He was gone about 10 minutes when nurse asked if we should be worried about him. I said no, because he frequently spends a few minutes in the bathroom, just making sure he doesn’t have to go. 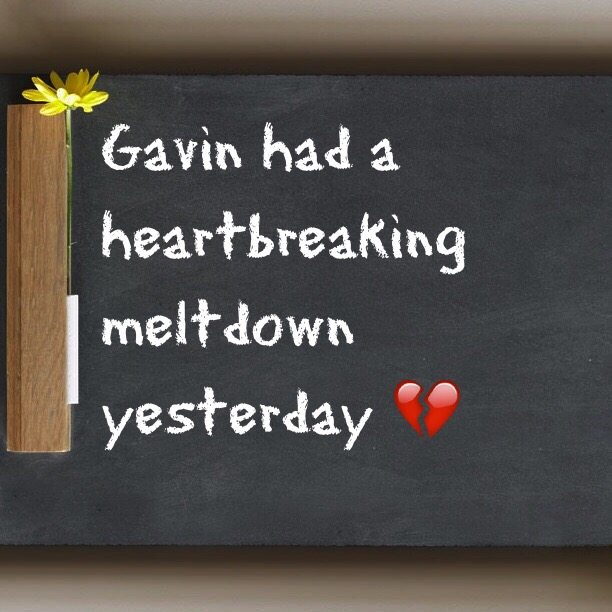 No sooner did I say that, than the nurse was pulled out of the office for an emergency.

I had a very bad feeling come over me and so I followed her.

Turns out Gavin was the emergency. He had gotten locked in the bathroom and couldn’t get out. He was so hysterical that no one knew who he was at first  because he couldn’t say his name.

I was about 3 seconds away from kicking the door in when it just opened and Gavin came out sobbing.

Turns out the door plunger had stopped working and of course Gabin was the one it happened to. It took a little while to calm him down because he thought he was going to be stuck in there all day.

It’s moments like this that I’m reminded that despite how well Gavin is doing or how old he is chronologically, he’s still profoundly developmentally delayed. In many cases, emotionally, he’s a kindergartner, trapped in a 15 year olds body.

I often forget that because it’s only this obvious in rather extreme situations. I work very hard to keep Gavin’s world from being shook up like a snow globe, so I don’t see this side of him very often.

Yesterday was a heartbreaking reminder that while he’s doing so well, something’s will never change.

I promised him McDonalds and he settled down pretty quick because he became very focused on that. He’s very motivated by food and sometimes that’s the easiest way to help him calm down. It pays to know your kids and I know my Gavin. 😉

If my opinion matters, and really it shouldn’t… but… I think you are the best dad in the world. Virtual high fives to Gavin for being so brave and such a champ. I’m 30 and I would’ve panicked. Prolly worse than he did.