Because You Asked: Why I vaccinated my kids -

Gavin got a big surprise today :)

Because You Asked: Why I vaccinated my kids

First of all, I fully realize this is a touchy subject. At the same time, I’m constantly being asked for my opinion on this subject, and I thought as the Lost and Tired story continues under a new name, I would address this issue and when someone asks, I can point them here.

I very much believe in the benefits of vaccines

All of my kids have been vaccinated and are up to date on their shots. My oldest is getting his final HPV dose in a couple of months.

Vaccines are overwhelmingly safe for the vast majority of the human race. That’s just scientific and medical fact. That’s always being disputed, but the man that sparked the entire debate was proven to be a fraud and had his medical license stripped away, but he’s still got a massive following. I’m perplexed by that….

As with many things in life, vaccines are not without risk.

Vaccines injuries are very real and anyone that denies that simply hasn’t done their research or are taking an irresponsible approach to being pro-vaccine.

What happens though is that people focus on the negative experiences of a statistical few and try to argue that vaccines just aren’t safe. That’s very irresponsible as well.

The reality is that there are underlying genetic defects or abnormalities, that leaves someone with a significant propensity for a severe, life altering or life threatening reaction. What makes this so scary for parents is that unless a child is screened for known genetic defects that put them at greater risk, there’s no way to know for sure if a vaccine is going to cause a problem. 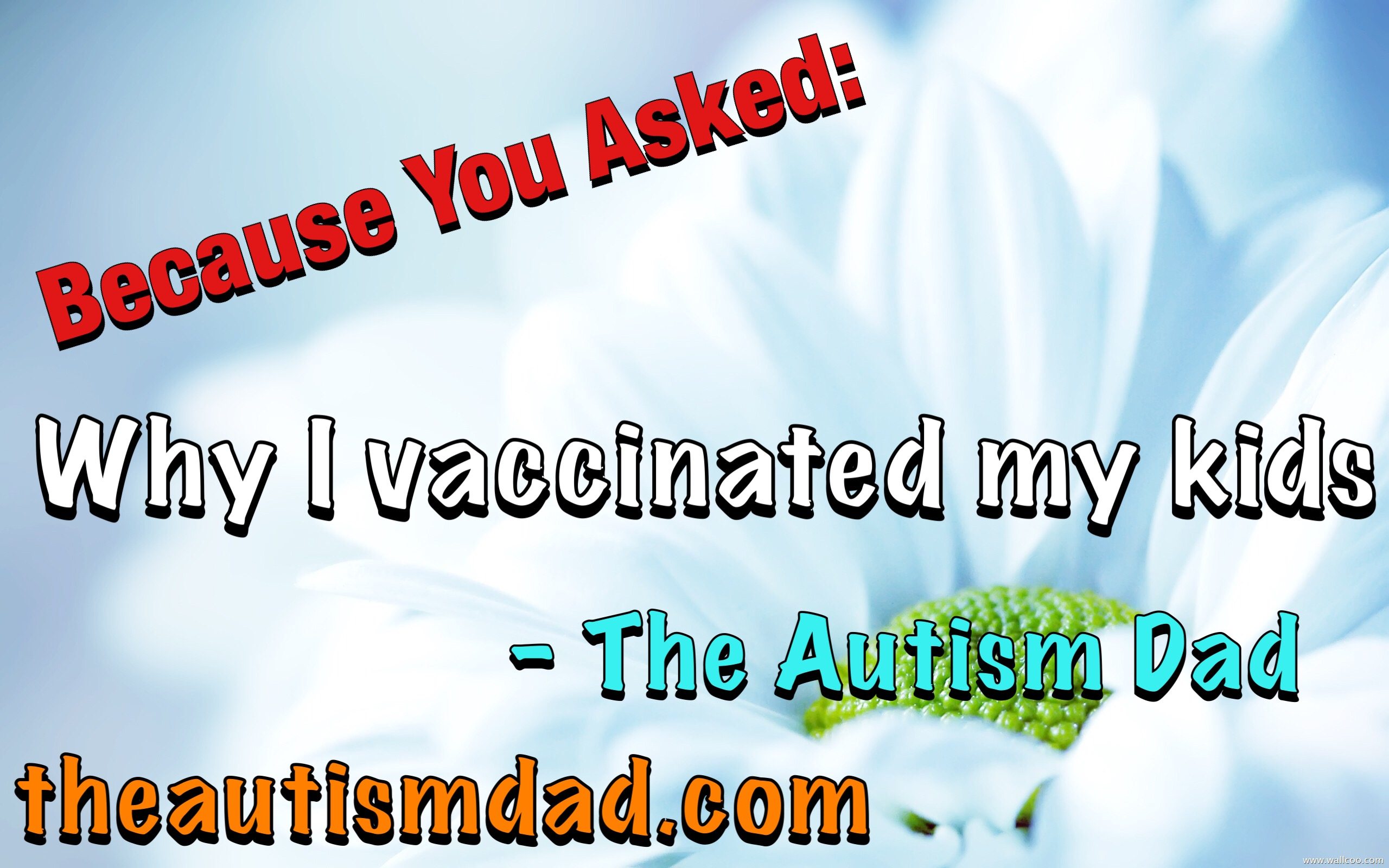 Statistically, the chances of a serious or life threatening reaction are minuscule at best. I know that’s not comforting for those you have experienced injury, but it’s simply scientific and medical fact.

The reality is that millions upon millions of people around the globe get vaccines each year and while an extremely small percentage of people have a serious reaction, the overwhelming majority truly benefit.

We have to look at vaccines in a realistic and practical

Keep in mind; these numbers are made up it illustrates my point.

If 100,000,000 people were vaccinated this year and even one child died or had a serious reaction, that’s tragic. The family impacted by that tragedy will never be the same, and their views on vaccines won’t be either.

I’m not downplaying the tragedy, but we have to be realistic, and we have to be practical. It’s important that we look at the bigger picture and I know that sounds heartless but it’s the reality of the world we live in. It’s also the only way to look at this issue responsibly.

If 100,000,000 people were vaccinated this year and 100,000 children were seriously injured, that would be something shouted from the mountain tops across the globe. If 100,000 were injured, as horrible as that would be, it’s only 1% of the total people vaccinated, leaving the other 99% fine.

When should vaccines be considered unsafe?

Should we pull the plug on vaccines and consider them to be unsafe because 1% of those vaccinated, may have some negative reaction?

We know that smoking causes cancer. We know that people (including children) suffer serious side effects like asthma, respiratory infections, and even lung cancer as a result of long term exposure to someone else’s second-hand smoke. These are both indisputable scientific and medical fact, yet people do this all the time. Where’s the outrage?

Tobacco companies knowingly create, market and even target young people with a product that is highly addictive and extremely dangerous.

While I’m sure Big Pharm isn’t without its share of corruption or lapses in ethics or morality, they create products that save and improve the lives of countless people, every single day.

Why do we target the companies that we literally couldn’t survive without and seemingly ignore the ones that are poisoning and killing people with their products?

Wearing a seatbelt is overwhelmingly safe and one of the best ways to survive a car accident. On the other hand, as a paramedic, I’ve seen cases where seatbelts have done more harm than good, at least in my opinion. Does that mean we should ban the use of seatbelts because of the rare instances where they can cause more harm than good? Of course not…and the same goes for vaccines.

My stance on vaccines

The overwhelming scientific and medical evidence shows no link between Autism and vaccines. While there are cases of vaccine injury that may result in a similar condition, it’s tragic but exceedingly rare. It’s also likely an underlying, unknown, invisible to the naked eye, genetic defect that is responsible and the vaccine was simply a catalyst.

That doesn’t make it less tragic, and we should provide a screening process for parents that may be concerned, but labeling vaccines as evil or dangerous are, in my opinion, an extremely irresponsible thing to do.

Diseases that have been considered once eliminated from society are now making a comeback as a result of the unvaccinated population. While most people won’t die from measles or whooping cough, the potential is there, especially in the very young, old or those with compromised immune systems, like my son.

There’s no end to the conspiracy websites or vocal activists that will claim otherwise, but it’s very important to make sure the information you are relying on is scientifically and medically sound. It’s also important to know the difference between opinion and fact.

This is my personal opinion that I’m basing on scientific and medical fact.

I’m sharing my educated opinion because people are asking for it. You don’t have to agree with me or support my opinion but it’s where I stand, and nothing you say will change that. I trust my kid’s doctors and numerous specialists, including those in Immunology. I don’t rely on the fly by night conspiracy websites or celebrities that use their platform to spread what the scientific and medical communities say is misinformation.

It should also be stated that doctors often lose money on vaccine appointments, contrary to what some would have you believe. They make more money on well checks, consultations or dealing with sick children. I’ve heard that from my kid’s doctors many times. Vaccines are usually nurse only appointments anyway.

Look, this debate has gone on for too long, and if things continue in this direction, we will see a rise in deaths that could have been prevented.

At some point, you have to put your faith in someone. I choose to put my faith in science, the doctors I know and trust and dismiss what seems like paranoid ravings from celebrities lacking a medical degree and conspiracy websites.

But that’s just me……

You’re welcome. It doesn’t do any good to get all worked up. I think most people who don’t like vaccines, are genuinely concerned about the wellbeing of their kids. I don’t think they are evil or stupid, just misguided. All I can do is share my thoughts, feelings and experiences.
My goal not to tell someone what to think but simply make them think. 😉

Thank you for sharing this, in such a calm, rational way.