We have a fairly decent drive ahead of us

I wanted to lose 40 pounds by my 40th birthday

I never thought this would be the case but I’m really struggling with my upcoming 40th birthday. I know it’s just a birthday but it’s a major milestone and I had envisioned my life much differently than it’s turned out.

Don’t take that wrong. I’m not unhappy with my life but the stress and anxiety filled direction it’s taken is overwhelming on a good day.

There’s so much to worry about on a daily basis and there are some things I’m going to be worrying about for the rest of my life. I don’t see a point where I’m ever going to be able to put these struggles behind me. 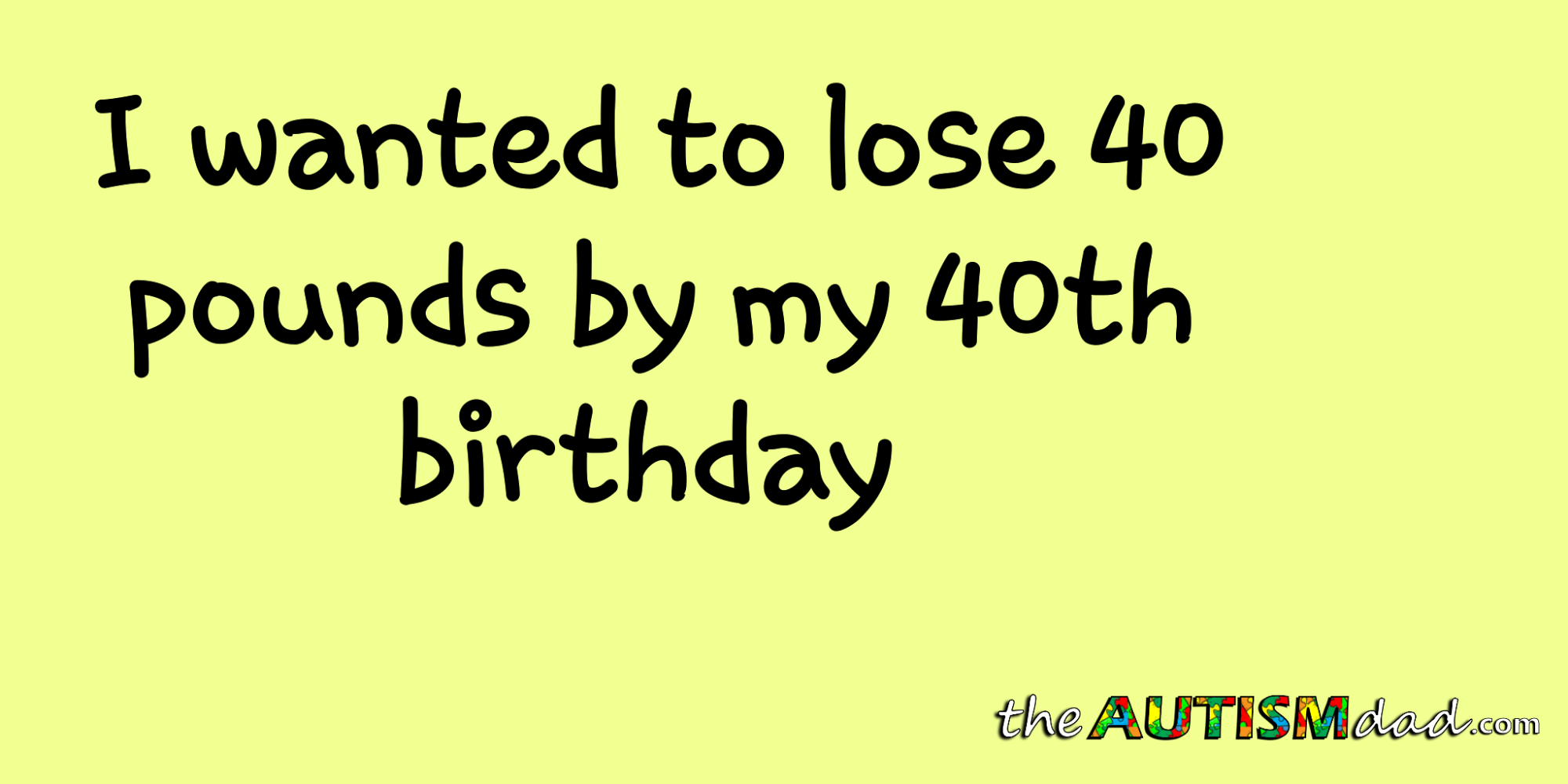 As I’m only a few weeks away from turning 40, I just can’t help but evaluate my life, my current direction and my future.

As many Autism parents can probably relate to, it’s overwhelming to picture your life going forward because it’s likely to contain the same struggles you’re barely surviving now. The only difference is you’ll be older and those struggles are going to become more of a struggle.

I’m not massively depressed or anything like that. I think I’m more struggling with the idea of everything, if that makes sense.

Anyway, I had decided that I was going to focus on something very positive, leading up to my 40th.

I wanted to turn 40 years old, having lost 40 pounds. Unfortunately, that’s not looking like a possibility and I’m choosing to accept that.

While I’ve not 40 lbs yet, I have lost 30 lbs and that’s still pretty amazing.

I was thinking that if I hit my weightloss goal by then, it would somehow make turning 40 a bit easier. Truthfully, I don’t know if anything will make turning 40 easier.

Perhaps I’ll do better to go into my birthday celebrating what I have accomplished, rather than focusing on what I haven’t.

I’m still going to struggle with this whole thing but I’m not going to set myself up for failure.

If I don’t lose the weight in time, I’ll be proud of the weight I’ve lost and ride the momentum into this new chapter in my life.

What an AWESOME achievement! I do little things to get and keep off my weight like parking further away from a store, so I have to walk a little further. It also helps to use smaller plates to eat off of, so it looks like you have more food. I measure fistfuls like a fistful of meat and 2 fistfuls of vegetables!

Try to give yourself a more achievable goal—such as losing two pounds a week. Crash diets aren’t the answer. Been there. I also suggest seeing a certified nutritionist—it helped me lose 30 pounds a few years ago. It will give you a better idea of what you can do to change things around, because eating better and finding ways to healthily reduce your stress will make you feel better. Cortisol is the monster created by too much stress all the time and it loves your mid-section!

Nora, thanks for the insight. When I said I wanted to lose 40 by 40, I meant that I was already almost there. I was hoping to push across the finish line before my birthday. This is something I’ve been working on all year. My weightloss is brought about by a lifestyle change and getting off the meds that were causing it in the first place. I see this as a marathon, not a race. Anything I do needs to be sustainable. I’m exercising, doing intermittent fasting and drinking more water. I feel better and it’s working. I never starve myself and when I feel like cheating, I do. ☺

@Janfrog1 I think you are AMAZING! You are dealing with things that I couldn’t. Stay positive and enjoy every achievement!