What parent wants to see their child beat the shit out of themselves? -

What parent wants to see their child beat the shit out of themselves?


It’s a bit of a blah/frustrating day for me here in The Autism Dad household. Elliott is in a good mood but still has a low grade fever and a horrible cough. Emmett is still not eating, he’s in a terrible mood and understandably so. I spoke with the school again this morning and made arrangements to stop by to pick up their makeup work so they can be caught up before they return to school after Thanksgiving break.

Gavin is having a typical Gavin Day.

That basically means that he’s very talkative, forgetful and easily frustrated. It could always be worse but even the status quo is very difficult to manage. All of it’s frustrating for me but the short fuse and self-injurious is the hardest to cope with. What parent wants to see their child beat the shit out of themselves? 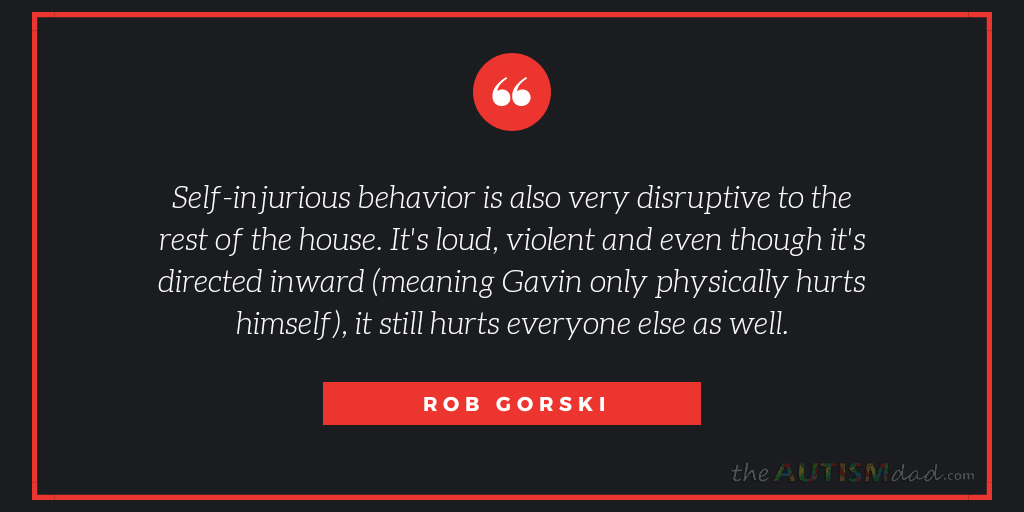 Self-injurious behavior is also very disruptive to the rest of the house. It’s loud, violent and even though it’s directed inward (meaning Gavin only physically hurts himself), it still hurts everyone else as well.

My goal for today is to get out walking, pick up the boys school work and try not to lose my mind, before having to take whoever isn’t sick to therapy tonight.

Lizze is going to be resting in bed for most of the day because it’s much darker and more quite. Her migraine is seriously impacting her ability to function today and it’s heartbreaking to see her in this much pain. This means walking is probably not going to happen but I’ll still need to pick up the boys school work regardless.

I hate not walking and it sorta ruins my day but some things are just more important. ☺

I thought Lizze had started the new medicine that they have for migraines? Also, is there any reason why she hasn’t tried marijuana? I know that it’s not legal for migraines but it is for fibro so that is her in. Worst case scenario I’m sure you can find some pot somewhere.

Yes, she’s starting a new medicine for migraines but it had to be approved, which it was a few days ago. Now we have to wait until they figure things out with the pharmacy. Insurance approved it but not through the Cleveland Clinic’s pharmacy. I don’t understand that but, it should be within the next week or two. It’s a process.

As for the medical Marijuana, she goes next week to apply for her card. The process is actually kinda expensive but if it helps, it will be well worth it. We’re still figuring working in coming up with the fee. I think it’s only once but you have to renew each year.

As for your worst case scenario comment, lol… We certainly live in the right neighborhood for that. However, we want to keep things legal..

Has she ever tried a TENS unit for her migraine? Sometimes my TENS unit will short circuit or stop a migraine, not always. Plus some people can’t stand the electrical stimulation.