We had some incredibly violent outbursts -

Gavin had a HORRIBLE night

We had some incredibly violent outbursts


We had some very violent outbursts last night and yesterday. Gavin was making some mistakes and not coping with them well at all. The two main ones were at dinner time and revolved around issues with his food.

The first one was in regards to his Ramon Noodles. He made Ramon for dinner, used cold water and realized that when he went to eat it, it was cold. Our water cooler had been out of water over the weekend and when it’s empty, we shut it off. We forgot to turn it back on yesterday when we refilled the water jugs and as a result, the water wasn’t heating or cooling. He didn’t notice that the water coming out was cold, which is weird cause it’s pretty obvious due to the fact that the bowl gets hot to the touch when the waters hot.

He came into the living room all stressed out because it was cold. We were trying to talk him through it but he threw his food away instead. We didn’t realize that when I suggested that he simply put his bowl of soup in the microwave to heat it up.

At that point, all Hell broke loose and he lost it. He couldn’t believe that he hadn’t thought of that. This went on for 20 minutes. Not once was he in trouble but he wouldn’t let go of his oversight.

The second and more aggressive meltdown occurred after his second attempt at making dinner.

After the Ramon didn’t work out, Gavin put a turkey sausage in the air fryer. After it was done, he took it to his room because he needed downtime. A few minutes later, he came down and complained that it was soggy and wanted to know if it was okay.

When I looked at it, this is what I found. 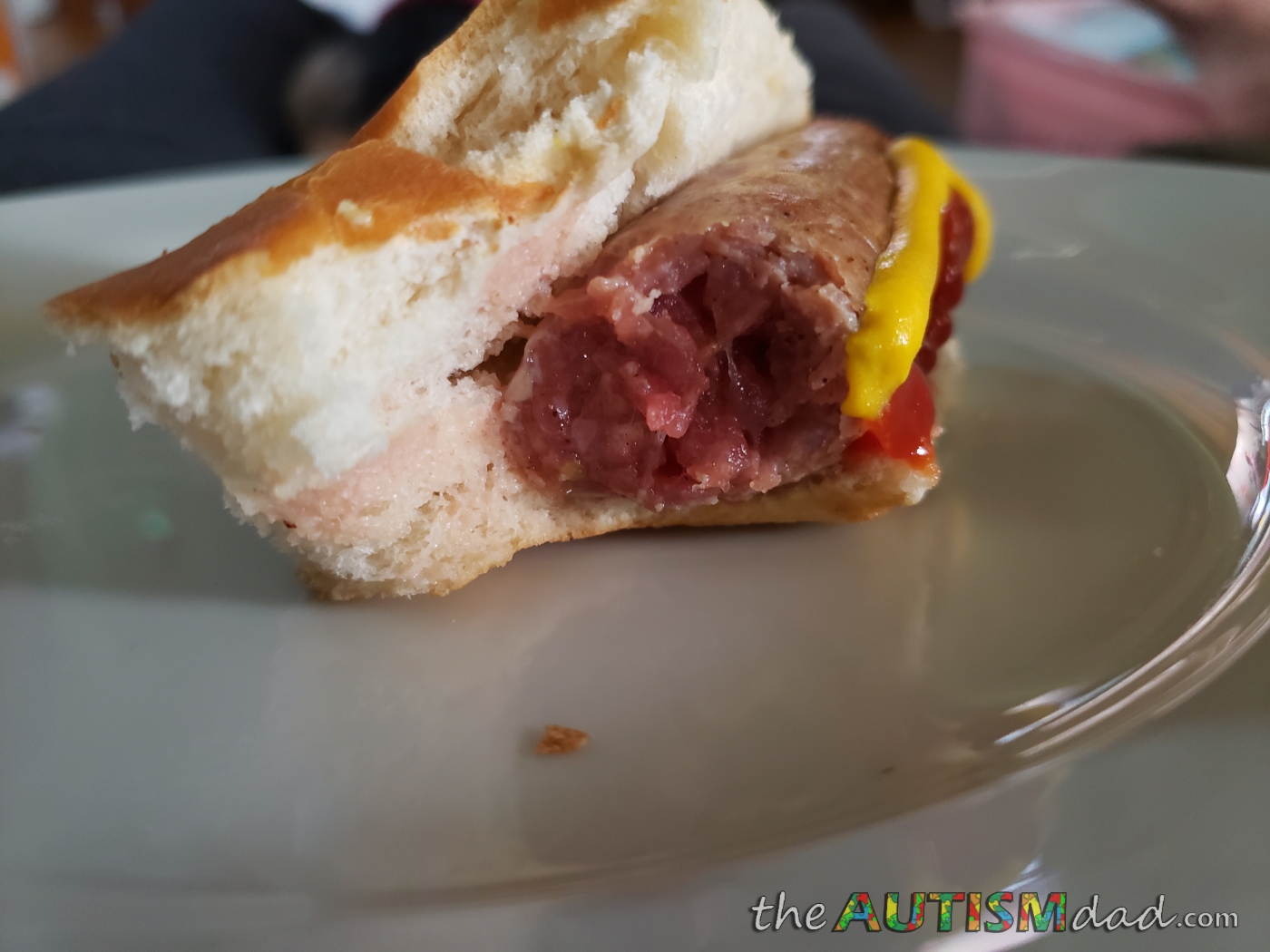 It’s almost completely raw and he didn’t notice until he was halfway done. He hadn’t cooked it long enough but he insisted that he did. Obviously, it’s undercooked and there’s really no debating that. Admitting that was something he refused to do or even acknowledge.

He was very angry.

Thankfully, it appears that the sausage was somewhat cooked on the ends and he only had one bite of it that was raw.

We tried talking him through this as well and it was a fruitless effort. Gavin became angrier that he’d made another mistake. He became so enraged that he punched the wall. That’s not okay..

This was his 3rd or 4th outburst that day and we’re concerned he’s sliding backwards to a place where he cannot safely exist in our home. At this point, we’re really hoping that pulling the Clozapine will help with his overall confusion and that will help to address these situations before they happen.

Unfortunately, there’s also a chance that pulling him off the meds will increase his outbursts. We’re in a no win situation and at the mercy of the fates. At least that’s how it feels.

We’re not taking this lying down though and we haven’t given up. I’ll update you on what we’re going to do in a later post. We’ll be talking to his psychologist tonight and coming up with a plan.

I came across your site searching for ASD blogs and first of all I want to thank you for your very honest and forthright posts. I saw something suggesting you’ve recently had surgery, and I hope you are healing well.

I was moved by this blog post in particular as it gave me an unsettling sense of Deja vu, and I believe I can help by sharing my own experience with psychotropics. I am a 33 year old female with ASD and though I am highly functional I have struggled mightily with mental health, and at one point was on a class of drugs called benzodiazepines, which are chemically very similar (but not the same) to Clozapine (a dibenzodiazepine). There’s no saying for sure if your son’s experience is anything like mine, but I can tell you personally I suffered a significant decline in cognition while on the drugs. I gave up taking them after finding myself standing in the kitchen trying to figure out how the cabinet worked so I could open it. I was both frustrated and horrified with myself, and your son’s frustration really resonated with me. As a reference point to contrast this behavior with, I have my PhD in chemistry, and never before or after my experience with benzos had I ever experienced such brain fog and such difficulty thinking, even simple things. Nor do I experience anything like that on my current medication, a low-dose SSRI/SNRI. After stopping the benzos my ability to think and reason returned to normal, and I hope they will with your son too.

Best of luck with everything!

I almost worked at one of those places that take in disabled people during the day. They have lots of activities that everyone can do. They get picked up by the adult caregiver school bus so you just have to have someone at home coming and going. I didn’t take the job because a person had to be really active and that was above my fibromyalgia energy level.

I think you’ll be amazed how good an adult day program will be for Gavin and for yourselves!!

So I’m curious where Gavin would or could go if you end up having to have him leave home. I remember when he was younger that residential placement wasn’t an option because of money and I’m curious what the options are now, especially given that he is now an adult and his cognitive function has decreased so dramatically. Granted, this all based on my assumption that he can’t go live with either of his grandparents or one of your siblings. I know that there are facilities that are State run/supplemented which would take him in and use his SSI payments for the cost of him being there, but I don’t know if that’s even an option or if there is a bed available for him. I don’t have experience in this sort of thing but I imagine it’s much like finding a space for the elderly (which I have gone through), and then the issue gets compounded when there is no ‘family money’ available to foot the bill. Best of luck in finding something that works and helps Gavin.

That’s a great question Kim and I don’t have the answer. He could go to his Grandparents like he did before but that’s a temporary solution and that assumes that he’s safe to be around. We’re hoping that intervention will help get things back on course. Part of his frustration comes from his level of confusion. Hopefully we are addressing that with the medication changes. The other thing we’re doing is looking into adult day services where he can spend time with other people his age, facing similar challenges. He needs more socialization and honestly, we dropped the ball on that. We’ve been so bogged down with managing his health and everything else, that we sorta lost sight of that. We have a place that’s been highly recommended and we’ve got a call in.

As for worst case scenarios… I don’t have an answer but we’re going to be working in that as a backup. Gavin doesn’t want to have to leave and we don’t want to send him anywhere. It was bad enough when he was tiny but as an adult, his outbursts could be very dangerous and we will not put the kids through that.

As it stands, we learned through on going therapy that Elliott was traumatized by Gavin’s behaviors as a small child. We can’t undo that but we can make sure it never happens again.

It’s a shitty place to be but it’s our life and we have to make the best of it. We have to learn from the past and continue moving forward.

I think adult day care will do wonders for him and I’m glad you’re working on that. As for placement, it might be a good idea to start getting his name on lists just in case. It can take months and sometimes years to find placement and if something comes up earlier you can always decline if it’s not necessary at that moment. Just my 2¢.

I’m sorry you have to experience this happening to your son. I would imagine reducing his responsibilities is unfortunately going to have to be a part of any plan going forward, but I would think that along with that would be some therapy/education/treatment for Gavin on how better deal with frustration. He undoubtedly has a lot to be frustrated about, but this seems to be an ongoing thing with him as far as destructive (self and otherwise) behavior when he’s confronted with a frustrating situation. Best of luck.

Thanks Jimmy. I was just telling Kim that one of the things we are doing is getting him time with people his own age, dealing with similar challenges. We found a place that will pick him up, along with a group of his peers and take them bowling, to the movies, fishing etc. We dropped the ball on this over the years and he needs time away from us and with people he can call friends. It could enrich his life and maybe that would help..

Your spot on with the ongoing therapy. We will continue to find ways of helping him manage his frustrations in more constructive ways.