You will not believe how my morning has gone -

Man, It’s Been A Rough Day

You will not believe how my morning has gone


This morning has been a fricking nightmare. Lizze is sick and I had way too mich to do before lunchtime.

It’s picture day and of course, for the first time ever, the boys wanted to dress up for their pictures. Unfortunately, Emmett couldn’t find his clip-on tie. He was in a panic and I told him I would call the school and figure out what time his pictures were at. If there was time, I would run and get him a new one. That was enough to defuse that ticking time bomb.

Luckily, we had some time. I dropped the boys off at school and ran to Walmart, who didn’t even carry ties for kids. WTF is up with that Walmart? Then I headed all the way to the other side of town and stopped at Target. They only had one tie and it wouldn’t match his shirt.

Kohls still wasn’t open so I paced nervously in the parking lot, like a lunatic until they were. I knew they had ties because that’s where I bought the one he’s missing. It was part of a shirt/tie combo.

Anyway, Emmett’s shirt is dark blue with black spots and the closest thing I could find was this. 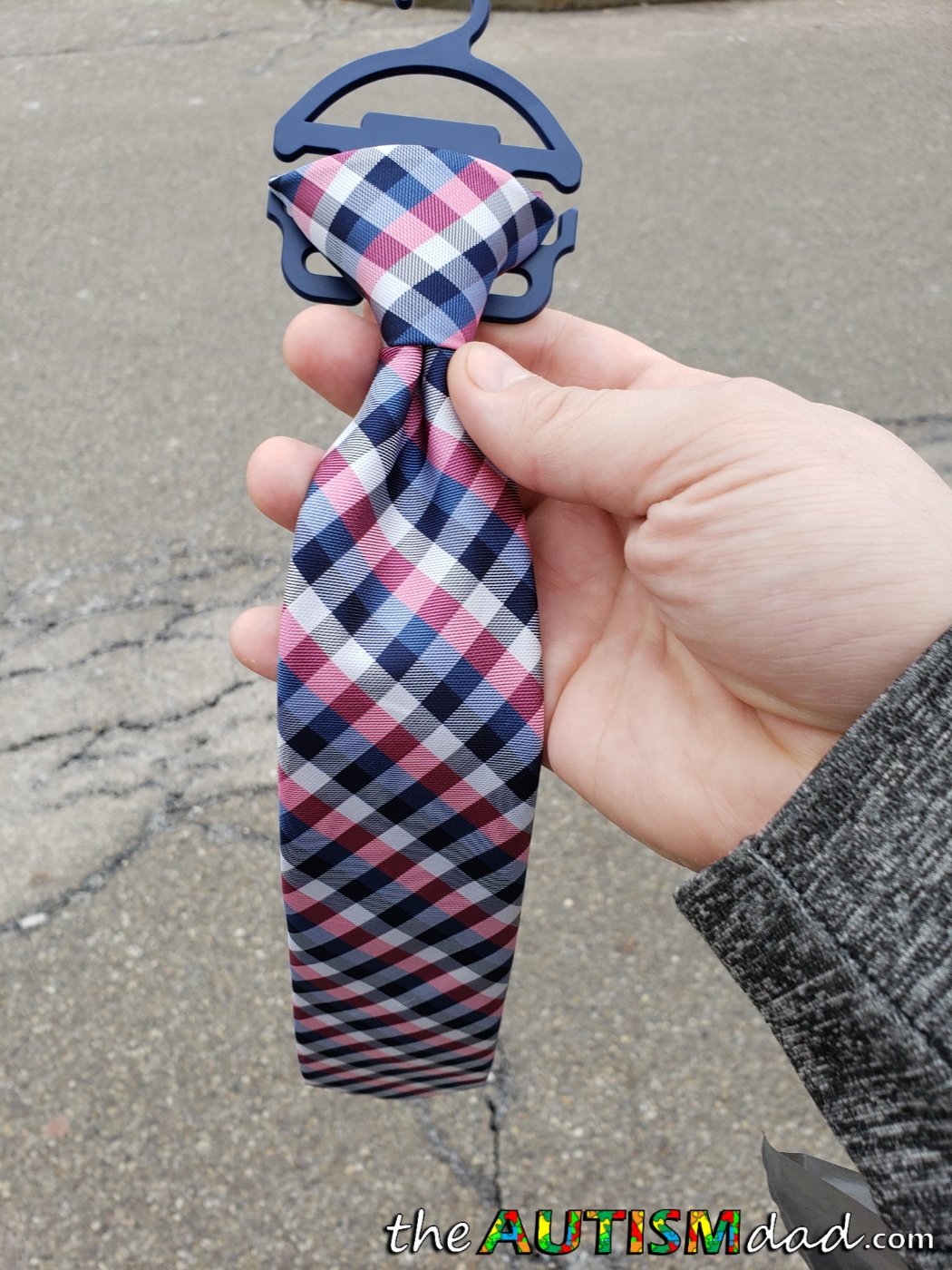 I had asked several people if this would match a navy blue shirt and they said yes. Unfortunately, when I double checked with Lizze, she reminded me that it wouldn’t match. I forgot that there were black polka-dots on his shirt and stripes won’t work.

Back to Kohls I went but they didn’t have any other stand alone ties that would match his shirt.

I figured, the only other thing I could do was replace everything. Unfortunately, I couldn’t remember the shirt size, so I called the school and the principal, checked it for me. He’s super awesome and was happy to help.

I exchanged the tie for a whole new shirt/tie combo. The tie alone was $20 but the shirt/tie combos were on sale for $21. That seemed to work out pretty well. I got it to the school and he changed into it. I was worried because he’s so sensitive to tactile things and he usually has to pick his own clothes out because of it.

Apparently, I did good and he was happy. ☺ 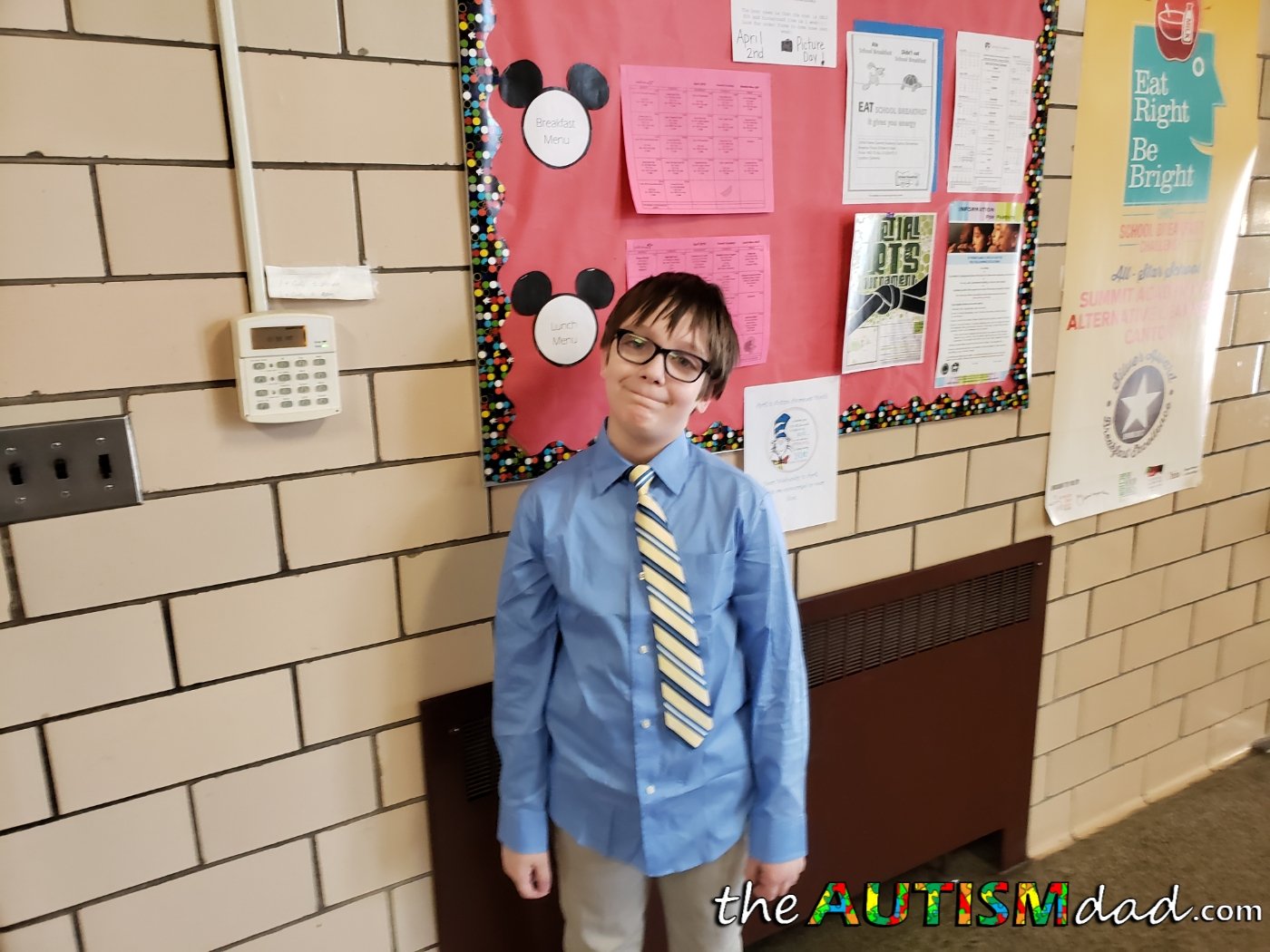 I stopped by the school office and donated some pants to the school for kids who need them and was off.

Walking was next on my agenda but I forgot my earbuds. I stopped at home and realized that Lizze needed meds that she was out of. I was back out the door and off to Walgreens.

After dropping the meds off at home, I was finally able to go walking. Yesterday, I was attacked by an angry, defensive goose. I was attacked twice actually. The first time it landed on my shoulders and went after my head. The video is back a post or two if you want to see it.

Anyway, I brought some bread today cause I wanted to try and bribe it into letting me walk by but they were gone. I had tweeted the park service yesterday because they follow me. They saw the video and referred it to the correct department. My guess is they relocated the geese together, because they are both gone.

I hope they’re okay but st the end of the day someone was going to get hurt.

I came home after 60 minutes of walking and ended up making a smoothie with what turned out to be spoiled almond milk. It was hard to tell because my smoothies don’t always taste good. I try to cram as many daily necessities at one time as possible. Taste is usually negatively impacted by that. ☺

It was until I felt it stinging the back of my throat that I realized my mistake. That’s not fun and I would encourage you all not to make the same mistake. Thankfully, I didn’t drink too much and I’m gonna pull though.. 😂

If a few minutes, I’ll be off once again to get the boys from school. I’m going to take them to visit my grandma in the nursing home before heading home. After that, all we have is family therapy left before I can sorta stop for the day.

Nice looking boy! You’re doing great. Just hang in there. It isn’t easy, but it’s definitely worth it