My kids with #Autism had their first real play date yesterday -

Something awesome is planned for today

Finding balance when the kids are gone

My kids with #Autism had their first real play date yesterday


We had a pretty awesome experience today, with our kids first real play date. In all our years, the kids have never had a real play date because play dates for kids with Autism isn’t always easy, or ever easy.

Without spending a great deal of time on this, I’ll simply say that trying to find actual peers for kids with Autism can be an enormous challenge. Even if you do manage to find a peer, there are literally a million things that can go wrong. 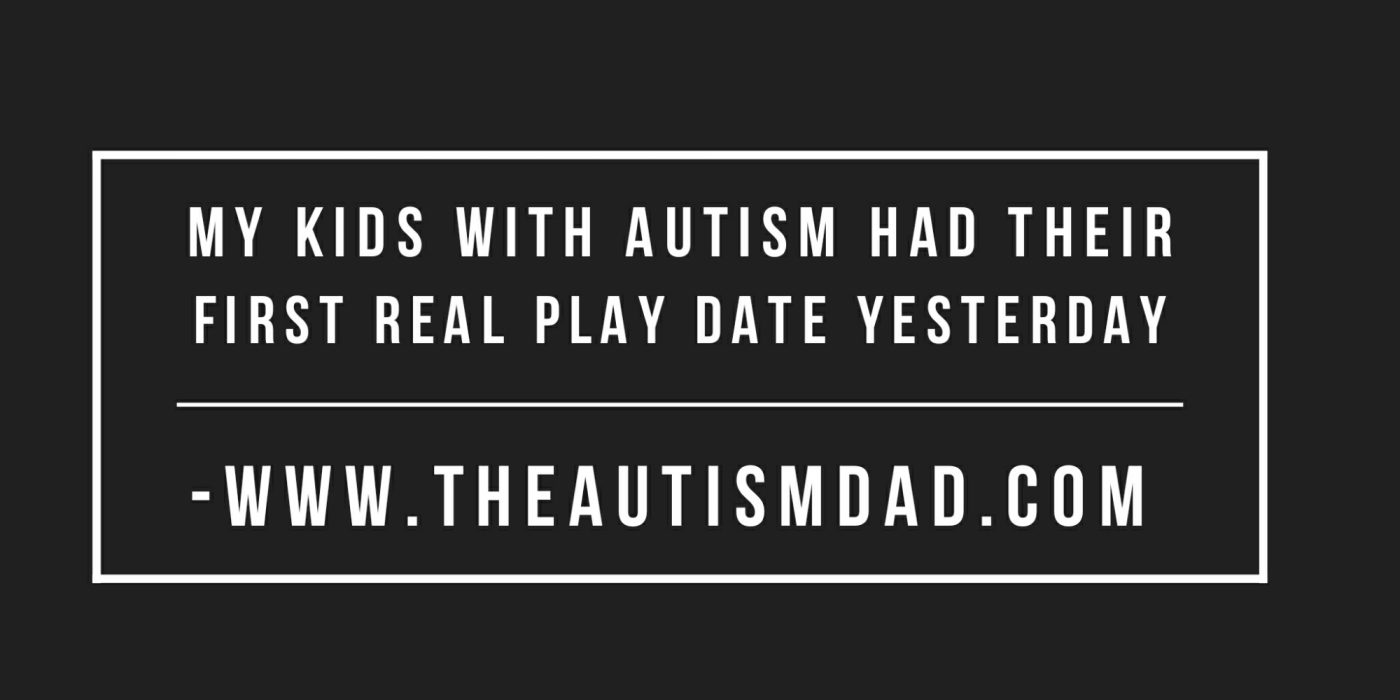 Putting two or more kids together with the many issues that can go along with an Autism diagnosis, can be a disaster.

One example I can remember from the kids just interacting with classmates has to do with boundaries. Some kids with Autism have very, very firm boundaries. They don’t like being touched, sharing toys, or even having their parent interact with another child outside the family. I’ve seen that last one a few times at my kid’s school.

A major problem arises from the fact that while many or most kids with Autism have very firm boundaries for themselves, they themselves don’t understand boundaries as they relate to other people.

I’ve seen many times, a child freaking out because another kid touched them or got too close. At the same time, the other kid is upset because he was touched or infringed upon.

Emmett is the poster child for this. He’s huge on everyone following rules, but not always following them himself.

If you find that hard to follow, don’t worry. Just know that it’s often a no win situation.

With all that being said, the boys had their first real play date yesterday.

I’m friends with the Mom of a few of the boy’s friends from school. I asked if she wanted to get the kids together and let them play for awhile. We decided on the free indoor playground and scheduled it for yesterday afternoon.

Long story short, everyone had fun. Elliott was in a funk for awhile, but once his friends showed up, he came out of his funky shell.

Lizze and I encouraged Elliott to play before his friends got there but he was upset about something. We never figured out what that something was but what matters right now is that he felt better and had a great time.

I even said screw it, and let Gavin play on the playground as well. If it’s not crowded, I’ve no problem with him playing. If it’s really, really crowded like it was yesterday, I have him hang back because I don’t want anyone getting hurt. As careful as he tries to be, he’s not very self-aware.

I would hate for him to accidentally bump into a little kid, and a problem arises as a result. I hate having to think like that but what people see when they look at Gavin, is an almost eighteen-year-old, who’s not supposed to be playing on an indoor playground with tons of little kids. Trying to explain anything is pointless because in my experience, people either don’t care, or don’t listen.

Thankfully, Gavin did great and he had a shitload of fun.

Afterward, we stopped at Sonic to get milkshakes. That was really the only part that didn’t go well. Emmett couldn’t decide what he wanted and when we finally ordered him a Snickers with vanilla ice cream (shake), he freaked out because the Snickers tasted funny in the ice cream. This led to a massive meltdown because he was upset by the taste/texture and because he felt he wasted our money on him.

As frustrating as it was for me, especially being in as much pain as I’m in with my back, he totally broke my heart. I’m never mad at him over this stuff. It’s not his fault and I know he tries his best. That doesn’t mean it’s not frustrating, but I’m never angry with him, and always make sure he knows it.

We spent twenty minutes trying to help him pick out something else and finally ended up deciding on a kids meal. He was happy, and all was once again right with the world.

I’m not gonna lie, I was overwhelmed by the whole Sonic thing. This happens all the time, but when I’m in this much pain, I don’t cope as well.

At the end of the day, the boys had a great time. We’re even going to do this again, hopefully on a day they’re less crowded. ☺

I’m so happy to have been able to arrange this today. Lizze and I both felt like we did something good for our kids. It’s not like to never do things for our kids, it’s quite the opposite actually. Unfortunately, much of what we are doing for the kids is managing behaviors or helping them simply navigate life.

That can prove very consuming, especially multiplying that by three.

Yesterday felt good because for a short time, it was like we were able to inject a little normal into their lives. We love our kids so much and do everything we can for them each day. Yesterday was just really awesome for all us.. ☺

Congratulations to all of you! My boys are 9 & 10 and have never had a playdate. We go to the park, though.

Congratulations to all of you! My boys are 9 & 10 and have never had a playdate. We go to the park, though.