The current estimate arrived and it's not good at all -

Basically, at this point we’re not looking good at all, not even a little.

At this point in time, I’m dealing with a total payout of about $1,000, and plus I get the chance to bless a random contractor and whoever did the marketing for construction companies near me. It’s important to understand that this is supposed to cover everything that has been currently inspected. 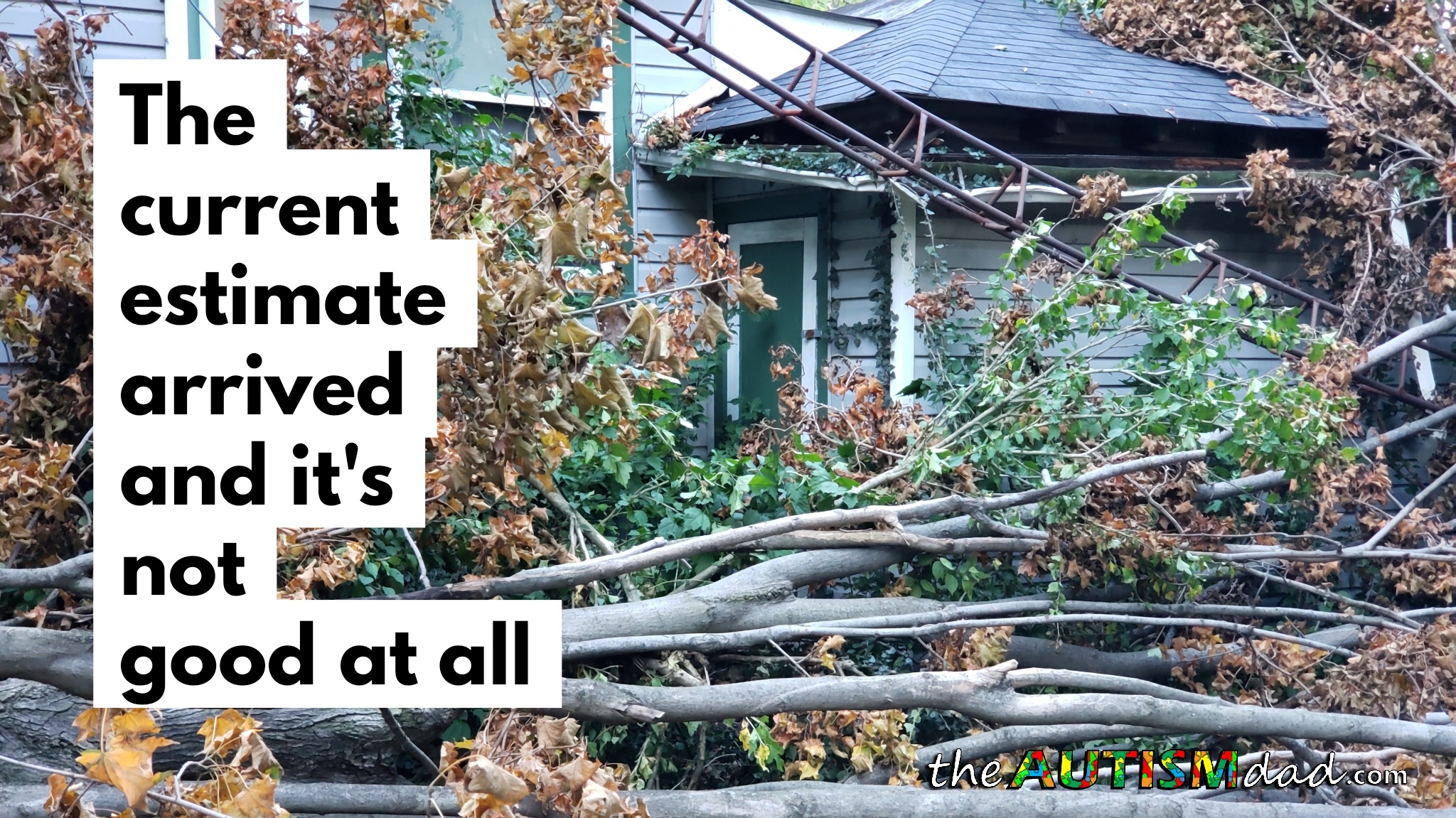 That $1,000 has to cover the cut up and removal of the enormous branch in the yard, damaged siding, about 80 feet of gutter and broken cedar fence.

The damage to the house alone is estimated to be at least $1,600 by the contractor I had look at it. He’s a family friend, with a highly reputable family business and understands what we’re up against. His estimate includes simply fixing what can be fixed and replacing the rest.

Insurance has estimated about $500 to simply remove the debris once it’s cut up. I’ve had someone from a very large tree service tell me I’m looking at about $600 – $1,000 minimum, to have the fallen part of the tree cut up.

The good news is that whatever the damage to the roof and related area amounts to, will be added to the $1,000 payout that we currently are looking at.

The bad news is that we’re going to have at least $1,000 out of pocket expense and there’s really no corners that can be cut. I have zero chance of coming up with that at this point, especially as the holidays are quickly approaching.

I’m trying not to panic but I’m up against a clock here and let’s be honest, I’m already in over my head with everyday life.

We have cold weather making its way and the insurance guy explained that any water damage caused as a result of delayed repairs will not be covered. I’m not entirely sure how we’d be able to decern the difference between damage the occurred after a certain date and that leads me to believe it would be open to interpretation. That means insurance may see it one way and I may see it another. I’ll likely be on the losing end of that one.

I’m overwhelmed and it’s taking everything I have not to just say fuck it and leave everything as it is.

I’ve already got ten million other things that I’m worrying about.

As bad as we are going to get it on this claim, we’re so lucky that it isn’t any worse than it is. With so many people’s lives destroyed by the recent hurricanes, we are truly lucky. My heart goes out to everyone who’s been impacted in that way.

Instead of letting it stress you out so much be proactive. Make a list of what needs to be addressed in order of priority and then break down what you can do yourself. Surely your father or Lizze’s has a chainsaw that you could borrow to get the tree cut up. I know it’s a large limb but it can be done piece by piece- I’ve had to do the same thing myself and it sucks but it’s doable. Then the fence. If it’s the small picket-ish fence out front, go to Home Depot and get a section and nail it up. Or even some chicken wire (if the issue is keeping Ruby in the yard). The harder parts will obviously be the gutter and siding so use the insurance money for those things. If there is any money leftover, get the tree pruned. Judging from the pics the limb that fell was live so the tree might still be okay. You’ve been putting off the raccoon damage in the attic- go buy a Tyvek suit, a mask, and some gloves and get to it. On the bright side, maybe having the gutters fixed will take care of the hole where the raccoons were getting in. Lemonade!

I bet you could offer that tree free to anyone willing to cut and haul away and it would be gone in a day at no cost to you.

It’s not the tree that is the issue- it’s the damage the storm and the trees have done to their house.

Suzanne Olsen yes I get that. But the tree removal is also a huge expense. At least issuing it free to someone that can use it next season for their wood burner frees up that number to use for the house. Also Canton has an arborist and might have limited finding for that as well.

Thanks. Here, they basically tell you how much they’re willing to pay. If a contractors estimate is higher, then there’s back and forth until the difference is reconciled. Sometimes insurance will make up the difference and sometimes they won’t. Very frustrating but it’s could definitely be worse and I’m thankful is isn’t. ☺