Review: Vibes high-fidelity earplugs are great for people with #Autism and #SPD -

Poor Emmett’s in so much pain tonight

Review: Vibes high-fidelity earplugs are great for people with #Autism and #SPD


A little while ago, I was approached by company called Vibes. They had a product that they believed I would be interested in because of its benefit to the Autism community. I’ve heard this countless times before and while skeptical, I was willing to hear them out, no pun intended. ☺

Vibes are tiny, high-fidelity earplugs. They are designed to help protect your ears in loud environments. Obviously, that is of benefit to many but for this review, I’m focusing on two specific situations in which these are useful. 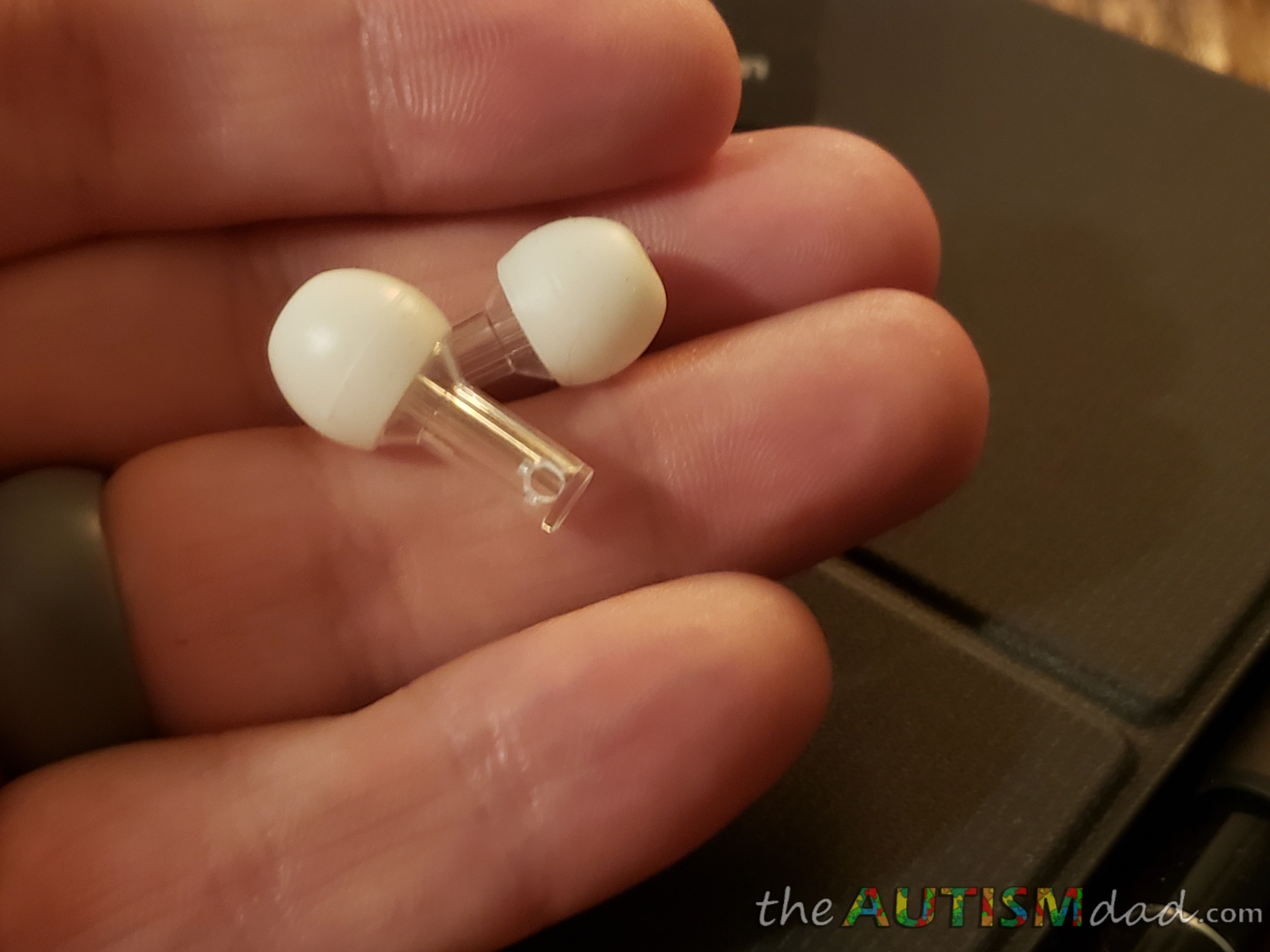 As an Autism parent and husband to a wife who suffers from chronic migraines, I was very interested in seeing if Vibes could benefit my family.

My kids struggle with sensory processing disorder and are very sensitive to sound, especially at higher volumes. My wife lives in constant pain, in part from chronic migraines. She’s very sensitive to noise because it increases her pain.

I received a few pairs of Vibes to try out with my family. I wanted to see if they lived up to the hype. Could they reduce the noise enough for Lizze to provide her with at least some relief, while not completely isolating her from the rest of us? Could the Vibes help my kids to be more comfortable in loud environments where they would otherwise use headphones to block the noise? 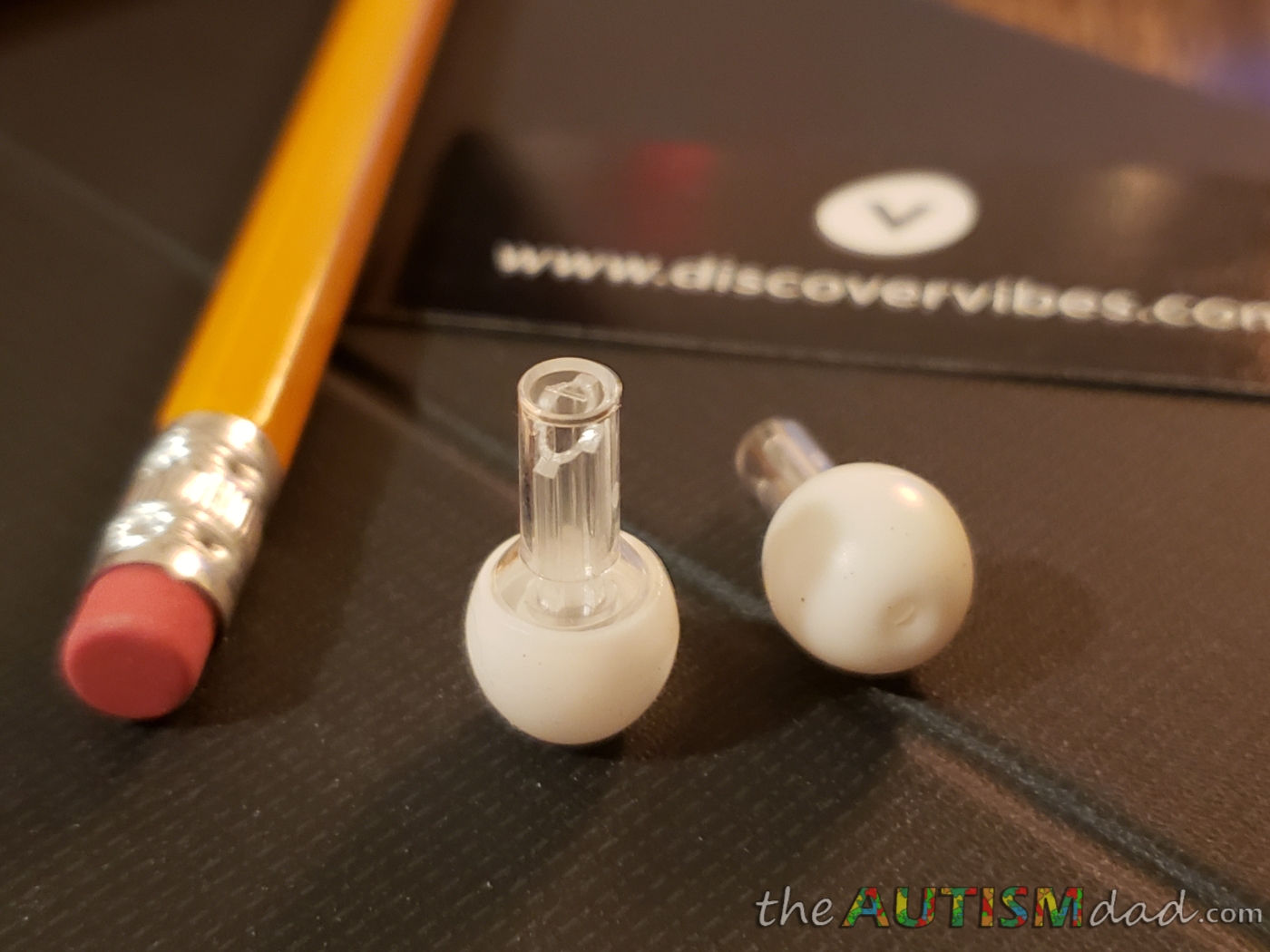 Historically, my wife and kids have relied on things like noise canceling headphones to escape unpleasant sound. These work great but are completely isolating. Over the years, we’ve tried earmuffs, those headbands you wear in the cold because they cover your ears and even those bright orange memory foam type earplugs. While they helped, they did present other problems.

Noise canceling headphones are very expensive and kids with Autism aren’t always gentle. I’ve talked to many parents who say they’ve tried them but they eventually get smashed and replacing them is something they can’t always afford to do. Noise canceling headphones do a very good job of blocking out all the noise and while that’s the whole point, it can also lead to safety concerns as well.

Earmuffs can be bulky and as kids get older, they can sometimes care about how they look wearing earmuffs in public. I’ve heard that before and that’s one reason many often opt for headphones.

The bright orange, memory foam type earplugs can be uncomfortable and again, they can block out too much noise, creating safety concerns, as well as making communication challenging.

Vibes are very different. Vibes decrease the volume, but still allow you to hear what’s going on around you. Vibes are clear, low-profile, and unless you’re looking closely, you can’t even tell they’re being worn. This is a very positive thing for anyone who might want something more discreet.

Vibes allow people who are sensitive to sound to be comfortable in louder environments, while still being able to hear what’s going on around them. As a parent, this is important to me because my kids need to be aware of their surroundings for safety reasons. 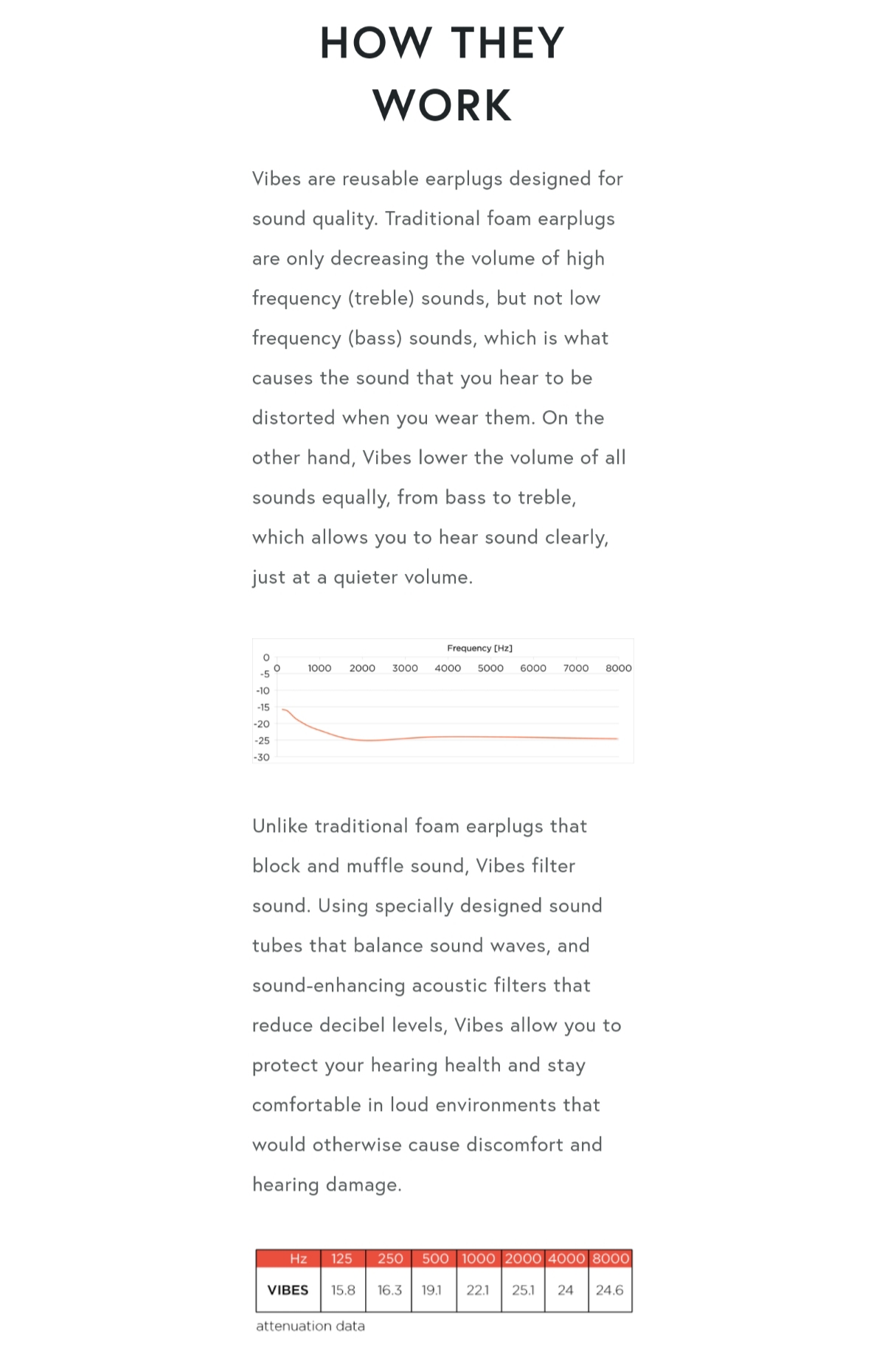 As far as our experience is concerned, we love them.

Of the kids, Emmett is by far the most sensitive to sound, which is oddly ironic because he’s also the loudest person in the house. He’s also very sensitive to tactile stimulation and typically struggles with earbuds. He usually resorts to over the ear headphones. That being said, he was able to wear the Vibes and while he was disappointed they didn’t play music, they also greatly reduced his anxiety in noisy situations.

Lizze has been using them religiously to lower the volume of the world around her. She’s stated that they make a huge difference for her, especially when the kids, who seem to be lacking inside voices, are in the same room. She’s a big fan of reducing the overall volume, while still being able to easily communicate with the kids. Most of the time, I don’t even realize she’s wearing them because I don’t see them and she still hears me when I talk to her. 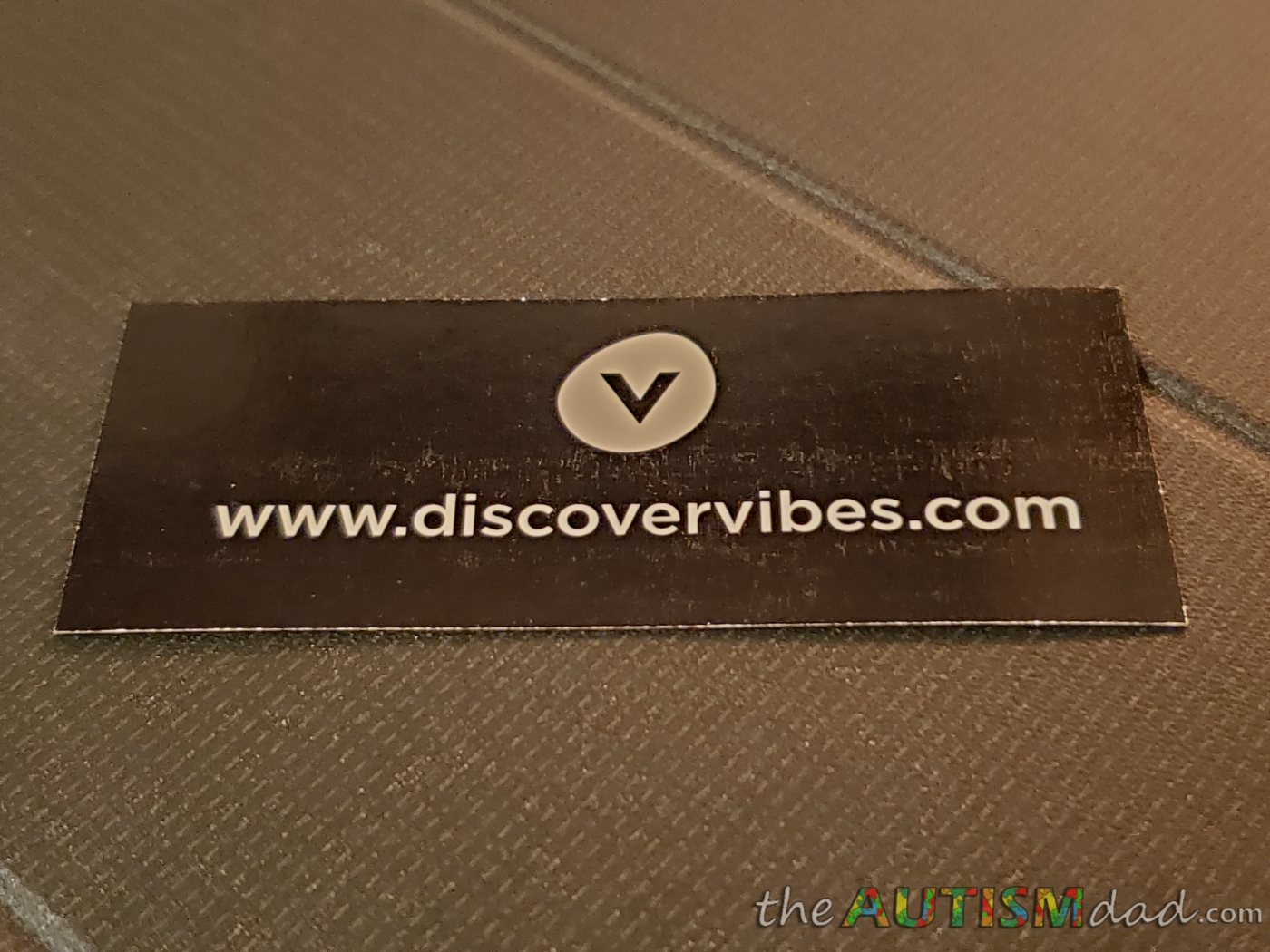 Our experience has been very positive and I would absolutely purchase these. Every person is different and while many can tolerate something in their ears, some can’t. Everyone’s milage can vary but if wearing earbuds or earplugs isn’t a problem, you can’t go wrong with Vibes.

Each pair of Vibes costs $23 and includes three interchangeable eartips, ensuring a comfortable fit for any sized ear (typically, people aged 6 and up). They work like regular earbuds in the sense that you can adapt them to fit your particular ear.

Vibes are durable and can be easily cleaned. You simply remove the white tips and clean them with warm water and rubbing alcohol. 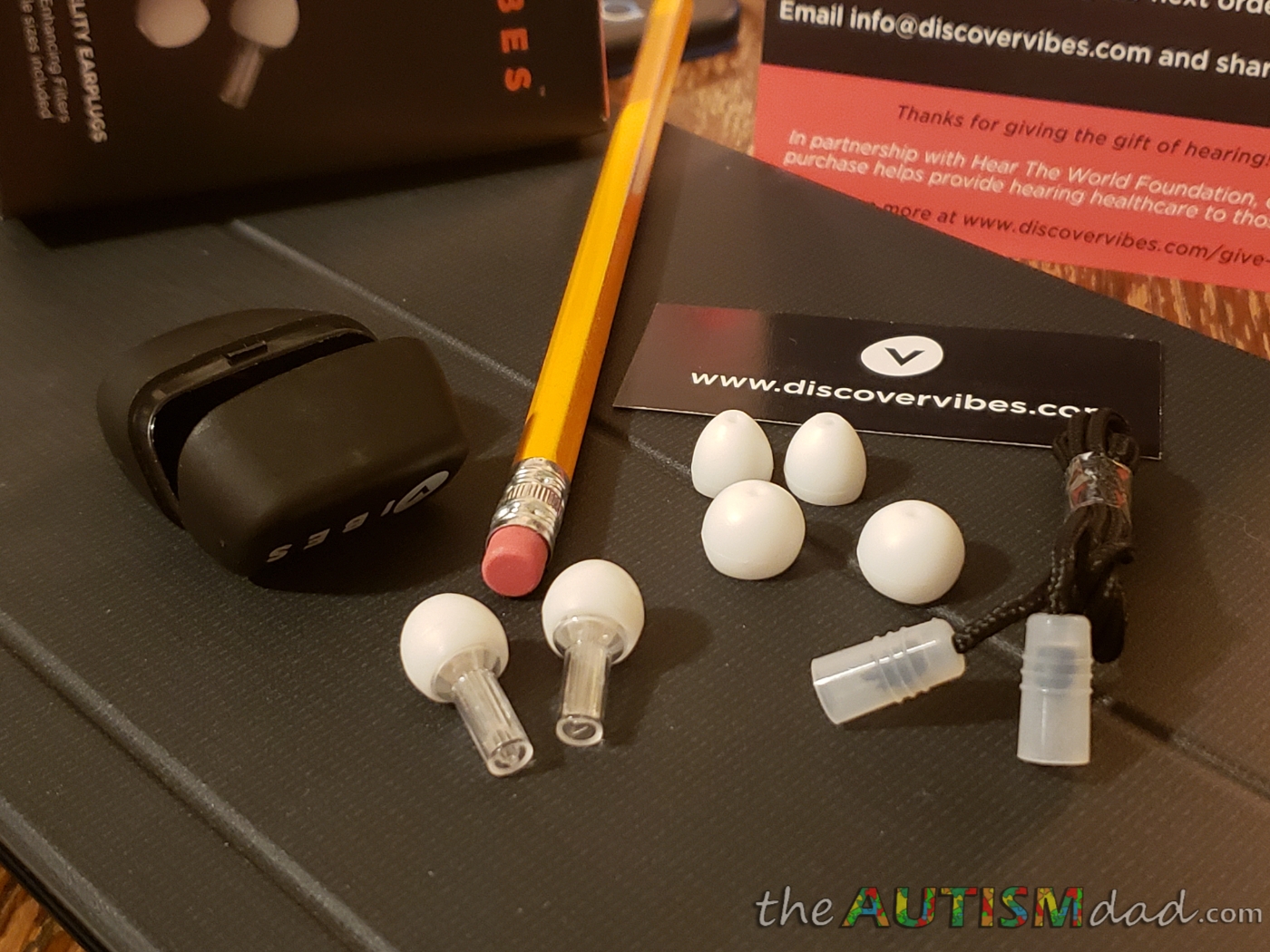 Vibes have proven to a very useful tool for our family, in the battle against sound sensitivity. They’re descreet, effective and way cheaper than noise canceling headphones.

I’m really glad I decided to check these out because they have the potential to improve the lives or those struggling with sensory processing disorder. I’ll be adding Vibes to my exclusive resources page because after thoroughly testing them for well over a month, I’ve found them to be very helpful.

If you’re looking for something to help reduce noise, while still being able to hear, Vibes is the perfect solution. ☺

You can purchase Vibes by clicking here.

Use the code THEAUTISMDAD to receive 15% off and get free shipping.

Feel free to ask whatever questions you might have in the comments below and I’ll do my best to answer them. ☺