Poor Emmett's in so much pain tonight -

Review: Vibes high-fidelity earplugs are great for people with #Autism and #SPD

Poor Emmett’s in so much pain tonight


It’s was a crazy long day yesterday and we received some really good news late last night. While we never received a phone call from his doctor, I did finally get an update via The My Chart app, as to the results of Elliott’s recent Whooping Cough test. You can see the results for yourself below. Negative… ☺ 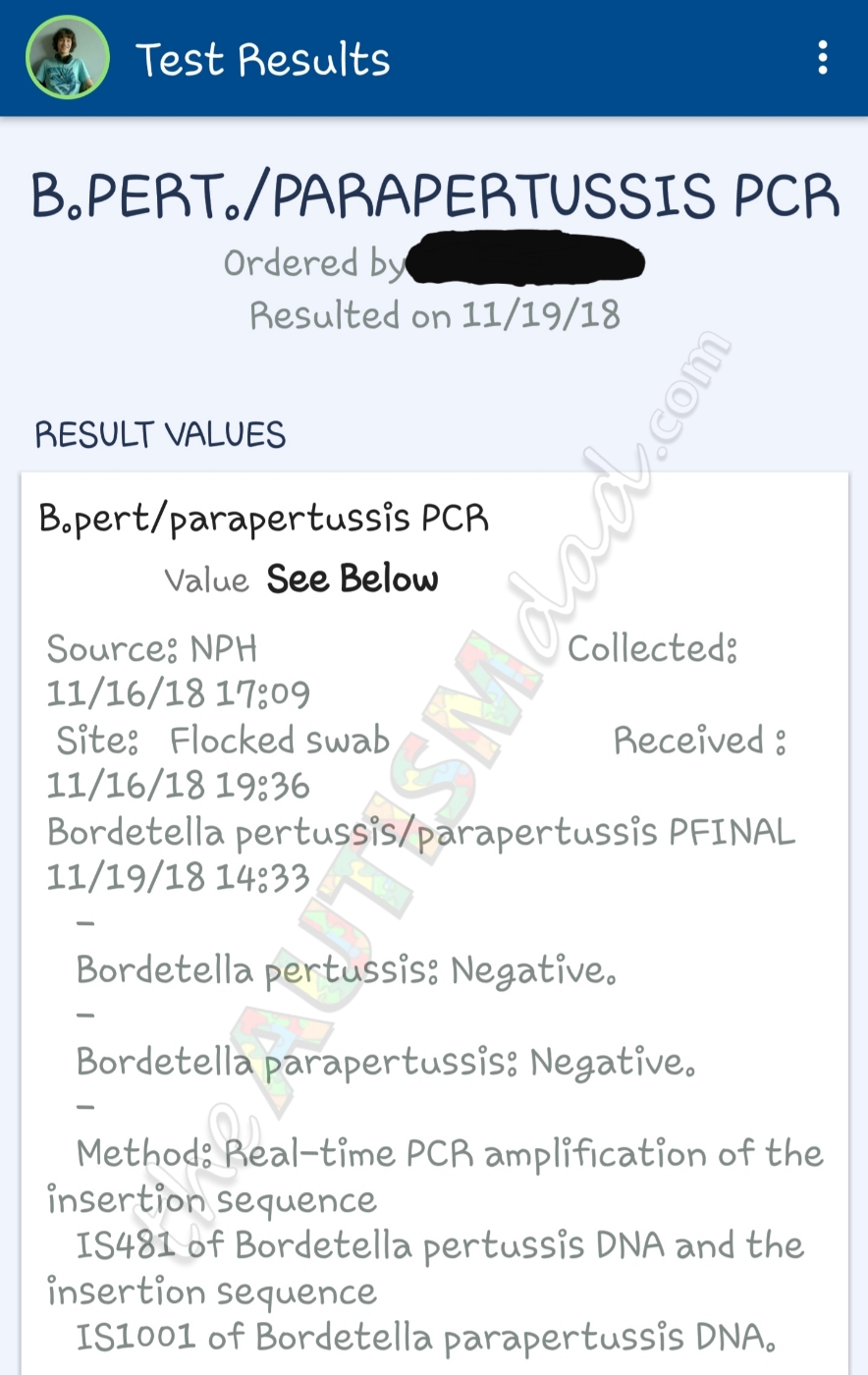 This is awesome news. Unfortunately, he’s still sick with something but at least it’s not Whooping Cough. The antibiotics seems to be helping and his cough sounds Croupy. He would need to be on antibiotics for that anyway.

He’s still running a fever as of 1:30 AM. I only know that because he’s unable to sleep and that was something we checked. His last day of antibiotics is today and he shouldn’t be contagious anymore, if he ever was but he’s still got a ways to go before he’s back in his feet.

While we’re super grateful that Elliott doesn’t have Whooping Cough, we do have a new problem. It’s new in the sense that it’s been awhile since we’ve seen this.

Mr. Emmett is in a fever flare. It began last night and he’s in a lot of pain as a result. For those of you unfamiliar with this story, Emmett has a rare fever disorder called PFAPA. Since he was very little, he would run idiopathic, high grade fevers for about ten days. It would stop for about three weeks before starting all over again. He’s had surgery to help and in some way it has but in other ways it hasn’t.

He only rarely runs dangerously high fevers anymore and they are no longer on the same very predictable schedule. He does however, breakout with very painful mouth sores and they last about a week. He’s in a horrible mood because he’s miserable and depending on how bad things are, he will miss school.

We did recently learn that this might actually be something called Cyclic Neutropenia. It actually fits better and makes a lot more sense. This came up during Gavin’s last hematology appointment when the doctor was collecting medical history. We need to speak to Emmett immunolgist next month about it.

Anyway, Emmett’s absolutely miserable and having a hard time eating. 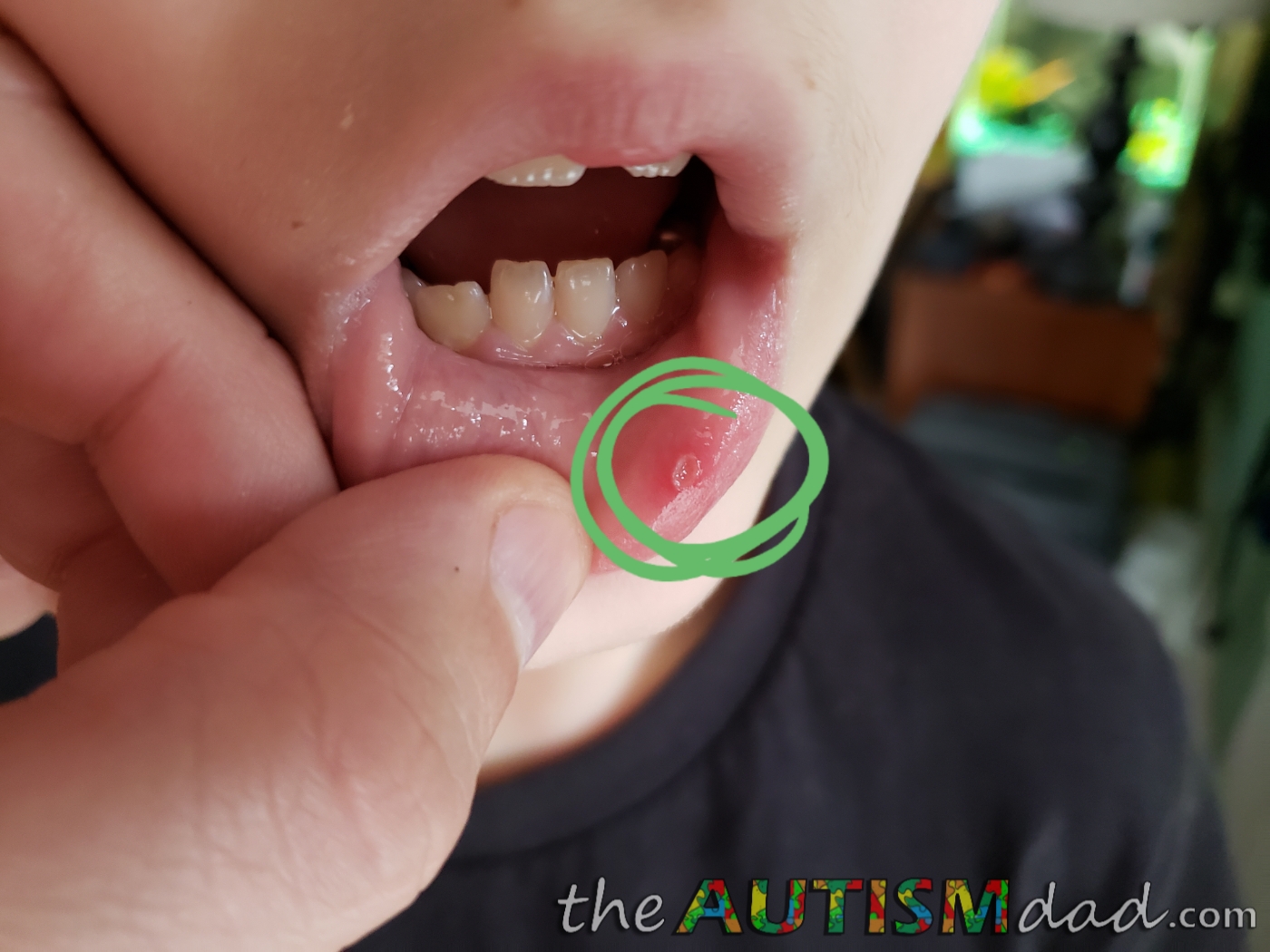 I grabbed this picture because Emmett asked me to take it so he could get a closer look. I thought it would be helpful to share because it can help put what he’s going through into perspective.

He will get these sores all over the inside of his mouth and down the back of his throat. It’s awful for him and he’s miserable for the week or so they’re present.

During this time, Emmett becomes increasingly more difficult to manage and it takes a toll on everyone. Stress seems to be a trigger, although that could simply be a correlation and not causation.

Anyway, we pretty much jumped out of one frying pan into another.

I’m so grateful Elliott’s not dealing with Whooping Cough but we’re now looking at a week of hell while Emmett is stuck in this latest fever cycle.

Hopefully, everyone will be better by Thanksgiving..

Croup is viral and antibiotics don’t treat it? Steroids do.

I wasn’t very clear so I should clarify. I’m aware croup is viral. He was in antibiotics because it was believed to possibly be Whooping Cough. The test results came back on night before his last dose of antibiotics and rather than skip the last dose, we gave it to him. His doctor told us that if he was improving on the antibiotics, to finish them off.

What I didn’t explain because I guess I forget that not everyone knows or remembers our whole story is that Elliott has asthma and an extensive history of pneumonia. When he was born, both of his lungs collapsed because he had premature lung disease. We were told that wouldn’t impact him as he grew up but that was apparently incorrect. He’s more susceptible to nasty respiratory issues. Because of that, there are times when we don’t know what it is for sure, his doctors treat him as a precaution. It’s not something anyone takes lightly but sometimes, it’s the safest thing to do.

He wasn’t diagnosed with croup this last time. He was being tested and treated for Whooping Cough, which is very serious. He was exposed, as was our youngest. Elliott began getting very sick and they felt it was best to treat him while waiting for the results. I only mentioned croup because his cough sounded croupy. I said he would be treated anyway because sometimes he is but that’s only because of his medical history.

Hope that clarifies things. I didn’t mean to suggest that croup was treated with antibiotics.

Poor little guy! I hope he feels better very soon! My heart goes out to him and your family! As a f… https://t.co/R09pfKvKJ6

aww Rinse his mouth out with warm salt water <3

Rinse mouth out with warm salt water i get them to