Gavin has major testing today at the @ClevelandClinic


I asked Gavin to let me see his letter, and when I read it, I decided that for right now, it would be best to hold off because I’m not sure how anyone would react to his words.

His words were beautiful, but I wasn’t sure it was the right time. I had Gavin say hello to his great grandmother and tell her he loved her. As she was reaching up to hug him, Gavin backed away and excused himself from the room.

He had become overwhelmed with emotion and was sobbing uncontrollably in the hallway. I’ve never in my life seen him react that way to anything before. I thought it best to help him out to the car, so he could collect himself and be comforted by those out there with him.

I had kept the letter under wraps because I just wasn’t sure how to handle that.

I ended up accidentally leaving the letter in the room, and my Dad found it. I got a text from him later that day, and he wanted me to know that he’d read the letter multiple times and the more he reads it, the more he thinks that Gavin should have the opportunity to read it. He felt that this represented a huge step forward for Gavin and that perhaps both Gavin and my grandmother would benefit from this.

Lizze and I have been known to be overprotective of our kids, and we’ve shielded them from situations like this over the years.

That said, after talking it over with the family, it was decided that we would allow Gavin to read his letter to her if that was something he was comfortable with. We obviously wouldn’t force the issue but giving him a chance to express himself, even if it’s a bit awkward, was the right thing to do. We hoped that it would be a positive experience for both him and my grandmother.

I approached Gavin about it and explained that if he wanted to read his letter to her, that would be okay.

Gavin wanted to read it, so the arrangements were made. My Dad met us at the nursing home, and I made sure Gavin was still comfortable with his decision to read it. We didn’t want a crowd, so it was just four of us in the room when he read his letter to my grandmother.

This video was initially recorded because it was a touching moment for a number of reasons, and we wanted to be able to share it with the family who wasn’t present.

After talking about it, we decided as a family, including my grandmother, that sharing this special moment was important.

It was important for a couple of reasons.

First of all, it was truly a sweet moment between an Autistic child and his great grandmother. It was challenging to navigate, but it was overwhelmingly positive for both of them.

Secondly, Gavin showed us that he’s still full of surprises. We had assumed that he was unable to handle a situation like this, based on past experience. However, we learned that sometimes we have to let go a bit and let our kid’s experience life, even if it might be painful. If we hadn’t, we would have robbed Gavin of the opportunity to express himself in such a beautiful way.

He found a way to share his feelings in a situation that was very emotionally charged. He said the things many of us were thinking but too uncomfortable to say ourselves.

My grandmother responded by simply hugging him from her bed. Gavin is very special to her. He was her first great-grandchild, and they have such a special relationship.

For an Autistic person or any person for that matter, what Gavin did was genuinely touching. It took courage for him to step way outside of his comfort zone, but I think it was a growing experience for him, and it’s something he will remember for the rest of his life. I know I will.

Here’s a copy of the letter. 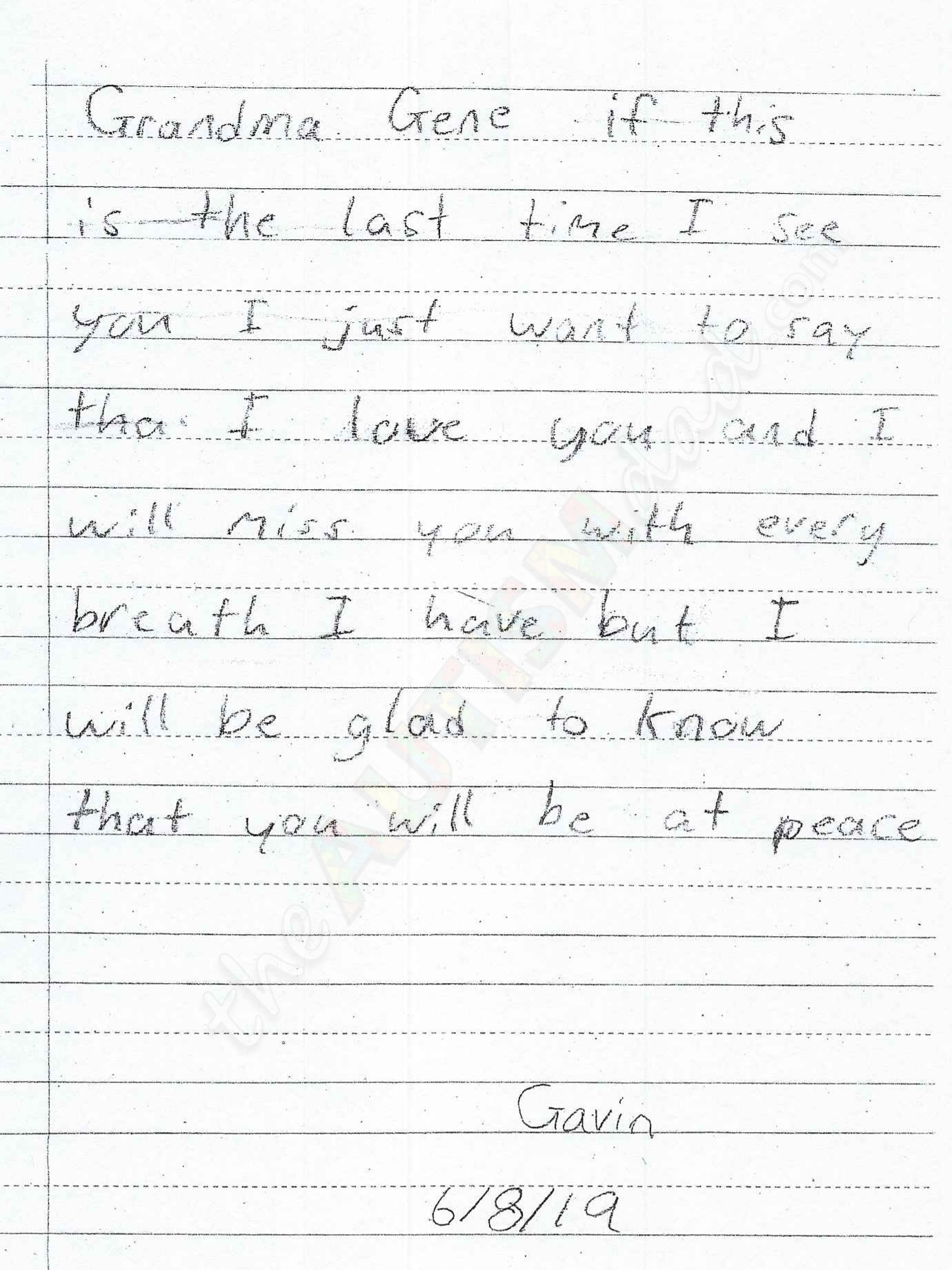 I say this all the time when it comes to my kids, but just when I think I couldn’t be any prouder of them, they do things to prove me wrong.

I can’t express how proud of Gavin I am. He said the words that many of us were dancing around. He’s broken through some of the stereotypes surrounding Autism and took a big step forward. ❤😀

I’ve been an Autism parent for nearly 20 years, and I’m still figuring things out. I’ve been guilty of being overprotective, and I’m learning that sometimes I have to let go for my kids to experience life in a more meaningful way.

This was never malicious. It was done out of an abundance of caution and wanting to protect our incredibly sensitive kids from a cruel and unforgiving world.

Going forward, my wife and I are going to approach things a little differently. This experience has opened our eyes to new possibilities, and everyone came away from this having grown. ☺ 💙

Reason: There needed to be some clarification about this situation. This was a difficult post to write, and there were parts I needed to articulate better to frame this event in the proper light.

This was a beautiful one to share, thank you. As a mother to a young son who’s likely on the spectrum, may I ask you how is it that it appears people on the spectrum seem to struggle with emotions but yet so many seem to express themselves so eloquently / reflectively on paper? My son is high functioning but really struggles with emotional regulation. He is able to write but prefers to write factually. Talking to him about his day or about his feelings is like pulling teeth, however of course he can go a mile a minute if conversation revolves around his topic of interest… thanks for the insight.

Again, everyone approved of sharing this, including my grandmother. It was something that we thought was pretty amazing. No one was exploited for clicks and it’s pretty awful that you would even suggest that.

As I said. The family approved it, including my Grandma.

Thank you Cindy. This was a very powerful moment for both of them. ♥