To make matters worse, the shooter knows we called the police now there’s fear of reprisal. For obvious reasons, I’m leaving out discriptions and details because I’m not stupid. The cops did absolutely nothing. I saw the gun in his pocket. My neighbor saw him with a gun and the whole block heard the gunshots. 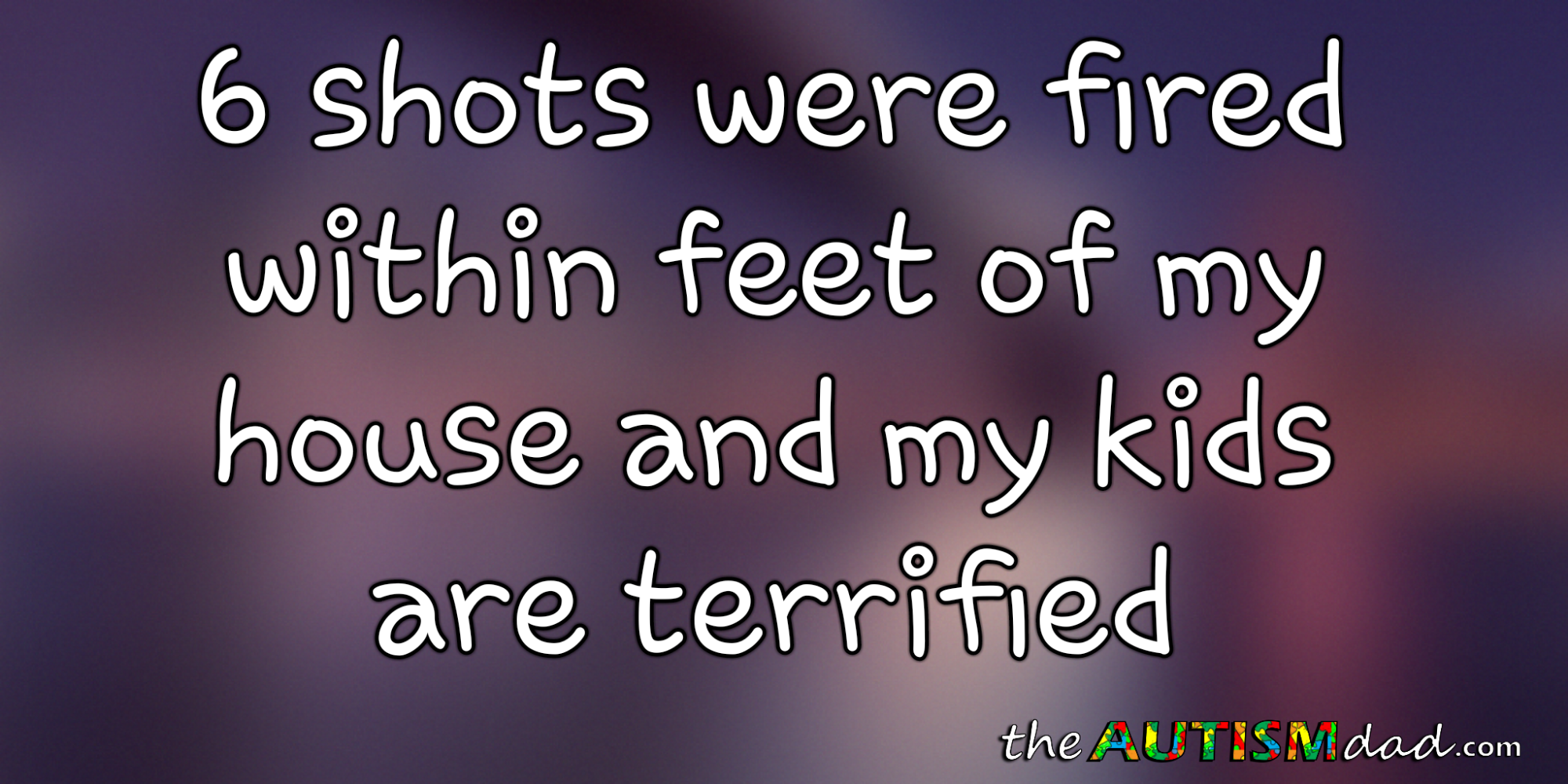 I’m not a huge gun person and I’m quite ignorant in that regard but I’m pretty sure what I saw was revolver. That would account for the six shots and no shell casings. I’m so angry because this person fired six rounds within feet of my home. I didn’t see any obvious signs that our house was hit but in the moment, I was more concerned about making sure this asshole was caught.

Someone could have been seriously injured.

We’re left trying to calm the kids and convince them that everything was going to be okay. Elliott happened to be walking down the stairs and past the window overlooking the alley where the shots were fired. He was right there as it happened and he’s freaked out. Emmett and Gavin both heard everything but were in their rooms on the opposite side of the house.

To make matters worse, I learned that there are a couple other major problems in our immediate neighborhood, that I hadn’t been aware of.

I’m trying to be careful what I say because I need to think about safety. The truth is, we will never be safe as long as we’re here. The kids are scared and they don’t handle that like their neurotypical peers would handle it. They perseverate on the thoughts of fear and it very quickly spirals out of control.

There aren’t even words to explain how I’m feeling tonight. It’s after 2 AM and I can’t sleep because I’m so worried.

I consider us very lucky because no one was hurt. None of my neighbors were hurt either and that’s definitely a positive thing. At the same time, it feels like law enforcement failed us and we were once again left to our own devices.

I feel absolutely powerless and that’s a horrible, horrible feeling.

Lizze and I have to put a major focus in relocating. I have no idea how we could make that happen but it has to happen and happen sooner rather than later.

I’ve mentioned it before and I see that someone else has mentioned it in the comments here- Habitat for Humanity could be a really good way for you to go. The other option is Section 8 housing. A quick search of Canton shows 3 BR 1 BA single family homes for $750 and since you’d be renting, things like broken appliances or raccoons in the attic would be taken care of for you. I don’t know how poor credit plays into Section 8, but HfH will send you to credit counseling to make sure you are able to pay your bills before they will even start a house for you. Those are both really good programs that are worth looking at. And to be completely honest they are probably the only options available to you since your main source of income is Lizze/Gavin/Emmett’s disability payments.

The whole situation sounds scary to me and of course the kids are terrified. I gather you did not feel you could walk over to that person and talk to him, so that person must have seemed scary himself. And so frustrating that the police did not accost the gunman.

You mention you have talked to neighbors about it. This might be the kind of thing you’ll need something more formal in order to get better police attention. An organized neighborhood group, monthly meetings, etc — police are much more likely to respond to an organization they know of than a single call. Of course, it’s a lot of work to organize people, but if others are scared too, it might not be hard. If you could get 3 or 4 other people to walk around the neighborhood with you, knocking on doors and talking about recent gun activity, you might both get a neighborhood group together and also put a bug in someone’s ear that they should behave better. I don’t know your neighborhood, maybe this is impossible. Or too fantastically dangerous. But what is the alternative? Moving? Everyone in the neighborhood moves? Maybe it’s time to do a little community organizing.

Okay, totally side issue: maybe a blog called “Saving our neighborhood” would be an interesting one? You said recently you were worried about exposing too much of your children’s lives now that they were growing up. Maybe you could transition to a new project? This kind of community-based reportage would be very attractive to a lot of outlets. Just an idea….

As for the moving part, have you talked to Habitat for Humanity? I’ve volunteered with them and helped new owners build their own houses. It is very rewarding, a great program

Well, you know you don’t want to live in a neighborhood where there is constant gunfire, especially with someone shooting close! I don’t know if you are wedded to the idea of where the kids go to school. I know in this state kids don’t have to live in their school district. But if you want to live near a good school for disabled kids, then that matters. (I assume you do.)

1) Good school for disabled kids (maybe same one).
2) Close enough for parents to help…but close is a little relative, too.
3) Not in a high crime area!

I just don’t want to see a blog about one of you all being in the hospital due to a gunshot wound.

Has anyone tried to talk to the person? I’m assuming it is a kid since just randomly firing a gun in an alley isn’t exactly gang activity. Or talked to the parents? Maybe this kid can be saved from a life of crime? Again assuming it is a kid that found a gun and wanted to shoot off a few rounds in an empty alley.