Confessions: Sometimes I can be a shitty husband -

He seems better today but time will tell

I’m so overwhelmed and I need life to slow down

Confessions: Sometimes I can be a shitty husband

No one is perfect, least of all me. I’m as far from perfect as one can get. Sometimes I can have days where I’m farther from perfect than I typically am. Today is one such day.

Lizze and I are under a great deal of unrelenting stress. We have everything with the kids, everything going on with her and everything going on in the rest of our lives (finances, the house, the car, where we live etc). It takes its toll at times and sometimes, I just overload. 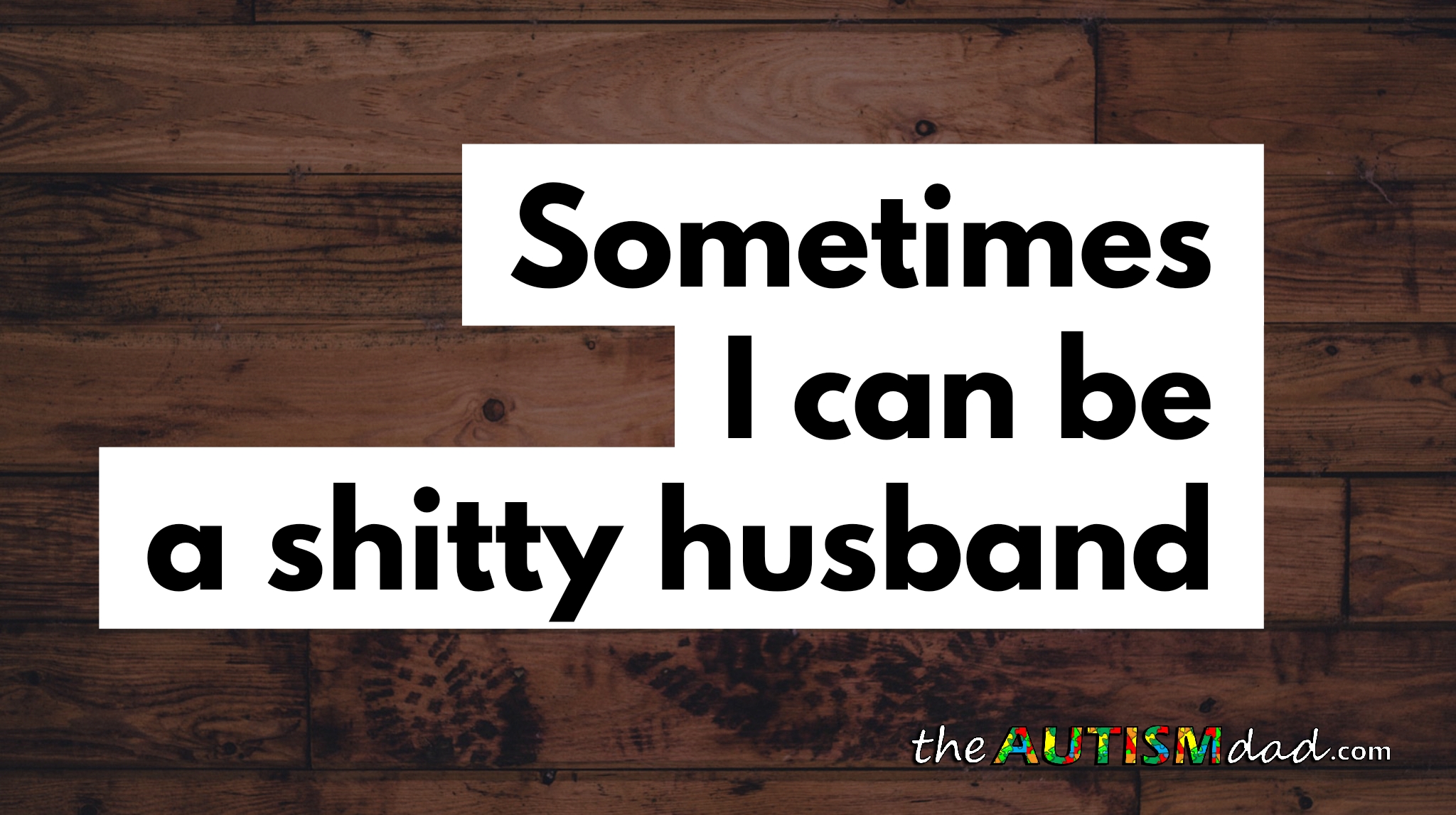 Lizze was trying to talk to me about something in regards to her health and I was not a good listener. How hard can that be? Clearly, it’s hard for me and that’s unfair to Lizze. It really is unfair and it’s something that I’m trying to address.

Anyway, the conversation devolved into an argument and frankly, we weren’t even disagreeing about anything. She was frustrated with me and I was frustrated with her. We were both overwhelmed by everything but for the most part, Lizze carried herself well. Me on the other hand, not so much.

Lizze and I have never gotten physical with each other. We’ve never even come close for that matter. So we’re clear, I’m not talking anything like that at all, from her or me.

Sometimes words can be just as hurtful and today, some of my words were just that, hurtful.

As I hit the point of maximum frustration, I made the comment that I’m trying to keep us all above water and she’s pulling me down or bringing me down, something to that effect.

That was a really shitty thing to say and I realized that right away. Unfortunately, I didn’t realize it quick enough to stop those words from coming out of my mouth. I saw the hurt in her eyes as she heard those words and I felt like a monster.

I didn’t mean them but I know where they came from. I’m overwhelmed by all Lizze has going on and I can sometimes feel like I’m drowning but that’s my weakness, not hers. She’s the one who actually lives with these things and I can’t imagine what that must be like.

I understand that realistically, this is a lot for me to deal with as well and I’m only human but that’s not an excuse.

When I said those words, I was reacting and there was absolutely no thought behind them.

Those words were so hurtful to her because it plays upon her fear of being a burden to our family with her physical and emotional health challenges.

I could have literally said just about anything else and it would not have hurt nearly as much. My words truly hurt her and I’m ashamed for having said them.

People say that we all say things we don’t mean when we’re angry. There’s truth to that. Lizze and I are both guilty of that at times.

Today, however, I really hurt her and I truly, truly feel awful. My words, while rarely perfect, should always be used to build up and not tear down.

I’ve apologized and we talked through it. Apologizing is important but the best way to show I’m sorry is to change the problem behavior. I said something in anger that I wouldn’t have said had I been thinking.

I have to do better and I will do better.

Thankfully, Lizze and I know that neither one of us are perfect. We’re living through a lot and we’re going to make mistakes but we do our best to learn from them, forgive and move forward.

Realizing, acknowledging, and apologizing for saying something in anger or misunderstanding makes a… https://t.co/5qIuXZuU1C

In situations like this that are super stressful, forgiveness is key. Bob and I don’t fight much but if we are both really stressed and/or ill, a fight can happen. Better to not fight but hey, you’re human and we’re human. That’s when real love and forgiveness make a difference. And yes, doing better the next time you’re stressed by working on your temper makes a difference.