I almost had to kick in my son's bedroom door tonight -

So far so good


We had an incident tonight that sorta derailed our evening. I had assigned everyone a chore to do after we got home from dinner. They were all simple things like feeding the dog and changing the trash. I asked Emmett to split up the new bottle of hand sanitizer between the bathroom and the kitchen. We buy a large bottle and use that to refill the two smaller bottles we have in the house.

Anyway, Emmett ended having a rough time for some reason. He had spilled some on the front of the new bottle, and because there’s alcohol in it, the ink on the label bled.

He was doing this in the bathtub for some reason, and the ink left blue marks all over the bottom of the tub. Emmett freaked out because he thought he’d ruined the bathtub. It’d been a long day, and he was already overstimulated. To make matters worse, Gavin took it upon himself to run up the stairs to see what happened and completely overreacted. He shouted OMG it’s everywhere or something to that effect, and that pushed Emmett right over the edge.

Emmett ran into his room and slammed his door shut. He slammed it so hard that he actually broke the door plunger and he couldn’t get the door to open. He began to panic, and that just made everything worse. 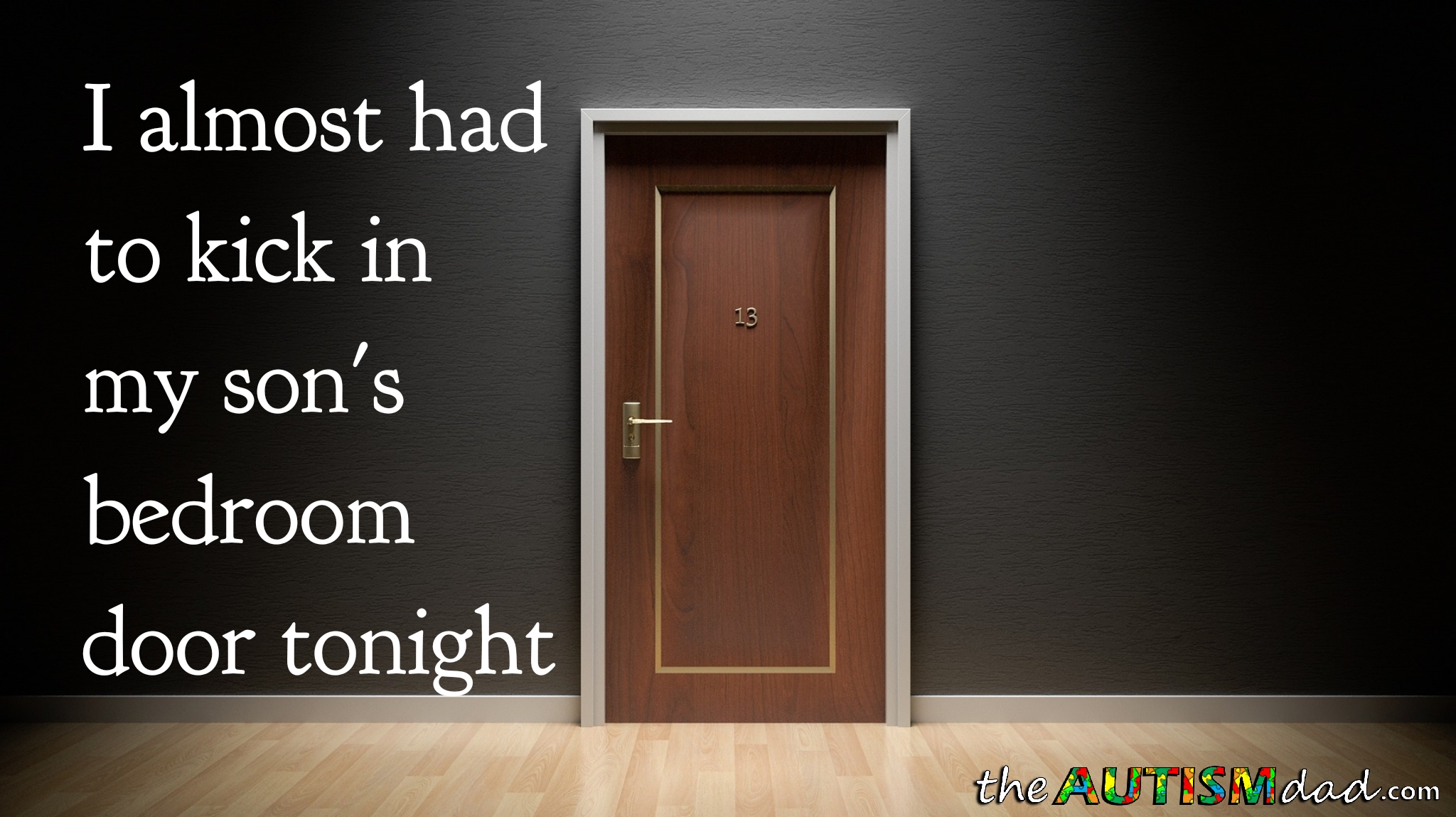 I had already looked at the tub and cleaned up the blue marks, which weren’t bad at all. The tub just needed to be rinsed, that’s it — no big deal.

When I realized that Emmett was stuck in his room because the door was broken, I grabbed my tools and began to pull it apart. Emmett was screaming for me to kick the door in, which isn’t something I wanted to do.

This door is original to our 100+-year-old house, and the door mechanisms aren’t as straight forward as their more modern counterparts.

I had to remove part of the door jam and the doorknob. I used a 5 in 1 to get between the door and the jam. When I got to the plunger, I was able to break it off and force the door open, without any significant damage. The only other option besides kicking the door in was to go out Gavin’s window and try to talk Emmett through opening his window. We’d then walk across the roof and back into Gavin’s room.

Thankfully, it didn’t come down to that.

Poor Emmett was also upset because he’d broken his door and that just poured fuel on the fire.

I was able to pull a closet door apart and swap out the hardware. Not a huge deal at all. I put everything back together, and it works better now than it has in years.

Part of how I got Emmett to calm down was by convincing him I needed his help. He was able to help, and we got him through it.

By the time we got him to bed, he was exhausted and fell asleep as soon as his head hit the pillow.

The whole thing lasted about an hour, but it was exhausting. Meltdowns suck for everyone but Emmett ending up trapped in his room, only made an already stressful situation, that much worse. We did survive, and at the end of the day, that goes in the win column.

I actually had to do that with my son who was 2 (at the time) and he locked himself in his room.