I feel like shit this morning but hey I’m alive


This is going to be a little gross, so heads up if you have a sensitive stomach.

I’m finally resting after a getting home from the Urgent Care a couple hours ago. In the last post, I shared that I was in pretty rough shape and needed to be seen immediately by Urgent Care. Let me catch you up on what happened and why.

I’ve had a cyst on my back for a couple of years. It’s never been a problem and it was checked out by my doctor.

About a week or two ago, the cyst burst. Since it’s located right in the middle of my back, smack dab on the center of my spine, I couldn’t take care of it without help. Lizze stepped up big time and took excellent care of me, and endured some rather gross situations.

The cyst drained for a few days, on its own and with some help. It eventually healed up okay-ish. A few days later, I began experiencing pain in the area beneath or below the cyst. I’m talking below, as in lower down my back, not underneath the cyst.

As it turned out, I developed an infection. We had been very careful, kept it clean and covered. I used antibiotic ointment as well but it became problematic. About two or three days ago, the infection burst and it was really, really gross. I’m so grateful that Lizze was able to take care of me because not many people could stomach that.

I woke up Sunday morning feeling better because it had drained again the night before. The plan was to deal with it when I saw my doctor first thing Monday morning.

Unfortunately, as Sunday went on, it got worse. I was in the grocery store with Emmett and I began sweating, feeling nauseated and in a shitload of pain. It hit me all of a sudden and I was forced to rush a kid who doesn’t do well being rushed because I needed to lay down.

Lizze and I agreed that it would be best to change the bandage, clean it up and let my doctor decide what to do in the morning. Those plans were derailed when we got home, and she checked out the bandage. It was clear that things had gotten worse.

It was draining again and it hurt so bad that I decided to it couldn’t wait until morning. For the record, it takes a lot for me to get to this point.

We made arrangements for the boys with my parents. They were in the area and met us at the Urgent Care. Lizze and I went in, while the boys went home with my parents. Elliott didn’t go willingly because he insisted on staying by my side. That was super sweet but wasn’t gonna happen. It was really sweet though and I was touched by his support. ☺

When I was called back, the nurse took one look at it and they moved me to their version of an OR or operating room. Within a few minutes, they had me in gown and I was able to keep my pants on. That’s not a huge deal I know but it the little things that make a bad situation a but more comfortable.

A nurse practitioner came in and explained what she was going to do. I was thinking I’d be seeing a doctor but whatever.

She cleaned up the area and then injected me with Lidocaine several times.

Unfortunately, the Lidocaine didn’t work well because she was only able to sorta numb the very surface. The cyst is right in my spine and she didn’t want to inject any deeper.

The very surface was sorta numb because I didn’t really feel her slice it open. That being said, it hurt like a motherfucker when she began digging around in there. Nothing below the surface was numb and it was some of the worst pain I’ve ever felt in my life.

She removed lots of stuff from my back, completely drained it, flushed it out and packed it full of gauze. The gauze keeps the incision from closing up and let’s it continue draining for a few days.

Stuffing the gauze in was extremely unpleasant because nothing was numb.

Afterwards, she bandaged me up and as Lizze pointed out, made interesting use of the medical tape. lol 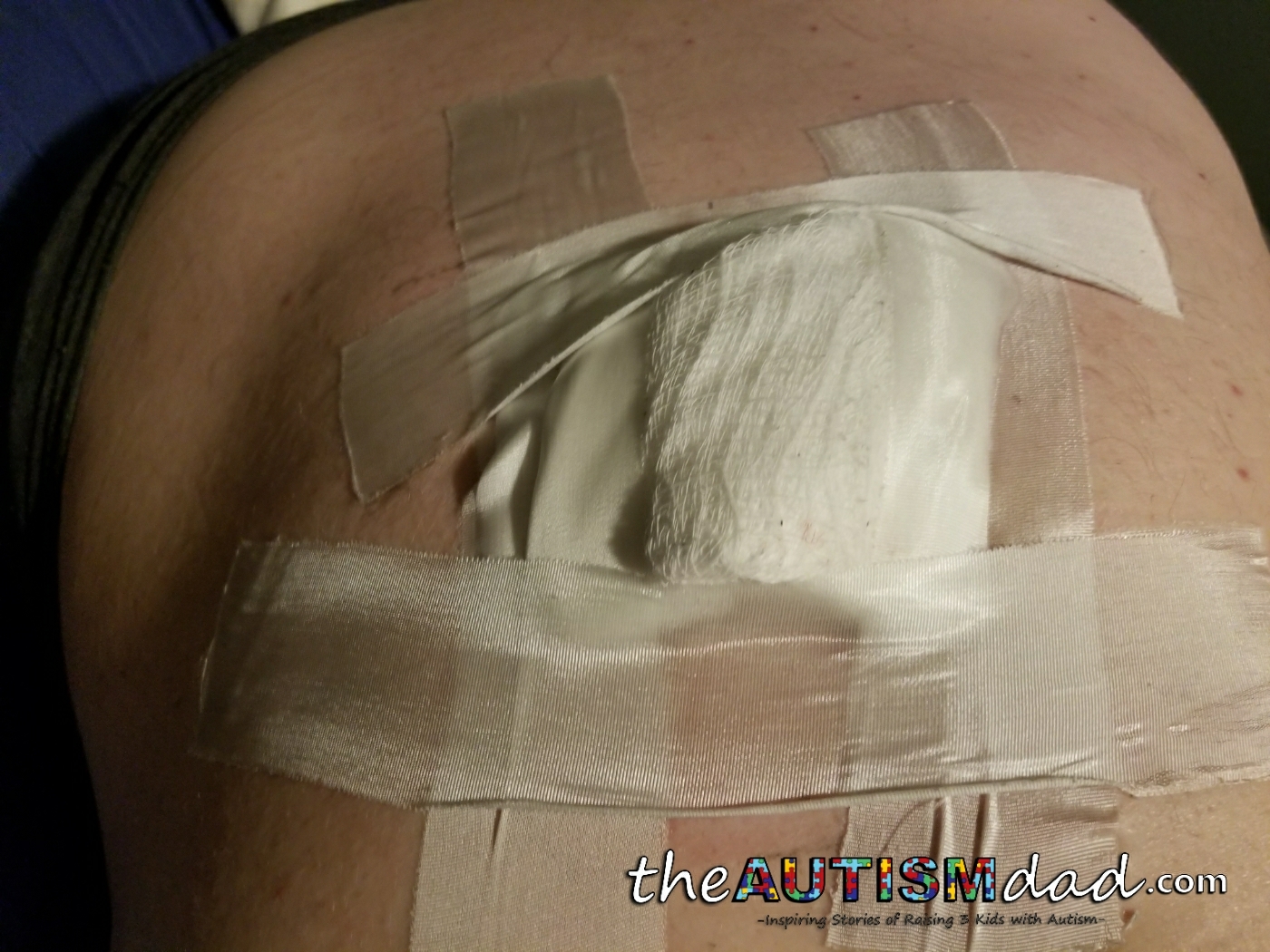 I’m not super comfortable with the way the nurse dressed this up. It looks like a preschooler was playing doctor on my back..

She gave me instructions on how to care for it over the next few days. She told me to do warm compresses four times a day, and to assist any drainage that may still be present. I’m suppose to change the dressing twice a day and that’s where I’m a bit confused.

How can I do warm compresses four times a day and only change the bandage twice? I’m assuming she doesn’t expect me to reuse a dressing twice, so the math doesn’t work for me.

I figured I would do whatever my doctor tells me in the morning. I was told to follow up with her first thing in the morning anyway.

I’m on some pretty heavy antibiotics. One I take twice a day and another I take four times a day.

This whole thing really took a lot out of me and I’m exhausted. It does seem to feel better but we’ll see what happens when Lizze pulls the packing out in a few days. That’s right, she told Lizze to pull the packing out in three days. I’m not sure if that’s normal but whatever.

I follow up with my doctor in the morning and a surgeon in a few days. Apparently, they recommend a surgeon going back in and making sure the capsule is completely removed. That’s going to be lots of fun as well.

For now, I’m super grateful that we got the infection out and for all the help I’ve had thus far. Lizze has been amazing and I can’t say enough about how grateful and impressed I am with her. When they first examined my back, they commented on how well dressed it was and how well cared for it was.

I need to thank my parents for taking the kids at the last minute as well. ☺

While I don’t usually take pain medication, I would have appreciated being offered something for the pain. I have a fucking hole in my back and qauze sticking out of it. It’s not super comfortable but I’ll manage.

Anyway, it could always be worse and I’m thankful as hell that it wasn’t.