Managing #anxiety and #panicattacks can be extremely challenging

If you’ve been following for a while, you may have heard me talk about how I love to cook. I really enjoy cooking and I’m actually pretty good. I’m not Masterchef good but I’m really good at cooking regular food.

As a long time reader, you may also recall that I almost never cook anymore and there are a couple of reasons for that. 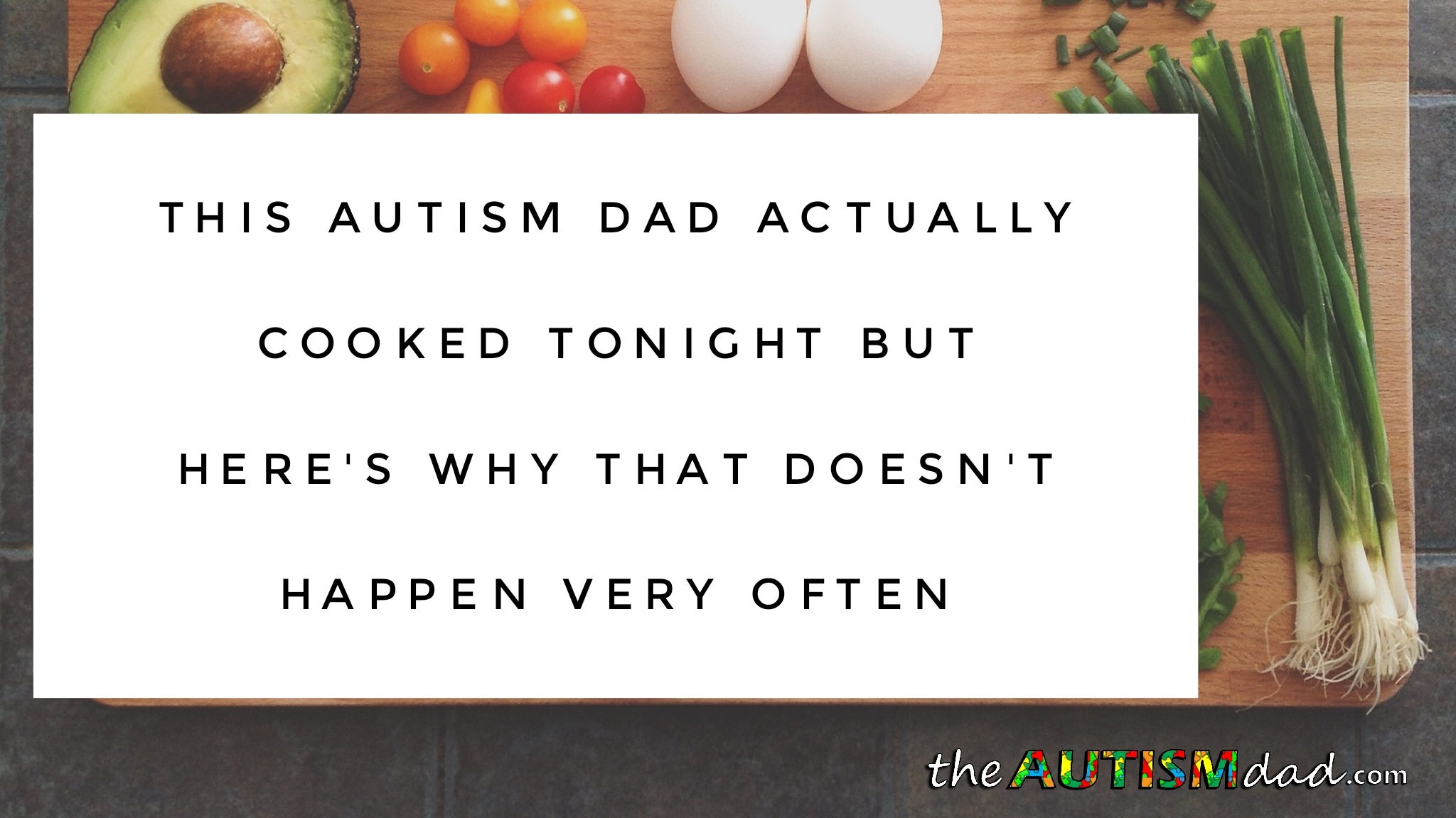 The biggest reason is we don’t have an oven. To be more accurate, we don’t have a working oven. Two of the four burners work on the stove and that’s about it.

The second reason is pretty common amongst Autism families, and that’s kids with Autism can be notoriously difficult to cook for. Keep in mind that everyone is different and some kids do just fine but my kids certainly don’t.

My kids have so many sensory related food proclivities and their menus are so limited, it’s incredibly difficult to cook anything that everyone would eat. Even if I cooked for the majority, the kids would find something wrong with everything and refuse to eat it. If it’s not perceived as perfect, they won’t touch it most of the time. They aren’t being difficult. They won’t eat when they’re hungry and this is a universe beyond being a picky eater.

How do I know this? Simple. That’s exactly what’s happened over the years. Frankly, I’d given up trying because it got to be too expensive, too wasteful and way too frustrating for everyone.

As time has moved forward, Emmett is starting to explore new foods, specifically beef. We encourage but never push because if we do, he’ll shut down and we may lose the progress.

Without a working stove, we’ve relied on our air fryer, toaster oven, microwave, crockpot and whatever I can do on the burners that still work on the stove, to prepare food.

Emmett and I have been talking about cooking a roast for a while now but he wasn’t ready until this past week. He asked me to make a roast and I was super happy to oblige.

Over the weekend, Lizze and I splurged on a roast. I know how that sounds weird but for some people, us included, you splurge when you buy something expensive like a roast. That’s especially true when I’m not even sure that anyone besides Lizze and me, will actually eat it.

I bought everything needed to cook the roast and was going to surprise Emmett while he was gone this past weekend at his grandparents.

Unfortunately, when I went to find the crock pot, which I haven’t used in a while, it was missing.

It was physically gone and not just misplaced.

Turns out, Gavin accidentally chipped the porcelain removable dish and must have thought the entire thing needed to be thrown away. He didn’t know any better and he thought he was helping. We could have obviously just replaced what was broken but whatever. It is what it is.

When I discovered this, I was pretty frustrated because replacing the entire thing was not in the budget and I wish he would check with us before making decisions like this.

Lizze and I talked about it for a couple of days and she reminded me that her headphones were still broken and needed to be returned to Best Buy under the Geek Squad warranty. We could just not replace the headphones and use the gift card for a new crock pot.

Both my boys go to feeding therapy and its really helped. Every time they eat something new is a win.

I loved this post. You and your wife face so much yet lift your kids up instead of treating them li… https://t.co/NQbG5xk7hB

Preaching to the choir. In the middle of preparing the 2nd lunch of the day! My dear child couldn’t… https://t.co/OwQCthXF1S

We had the same issue. My Logan would only eat pizza and white or beige foods: bread, chips, fries.… https://t.co/psTV8VQ3Lb

This year it seems that Gavin has lost a bit of ground mentally. It’s too bad. Not too long ago he lost a lot of his tubing for his infusions and throwing away an entire crockpot? Are you (and Lizze when up to it) even able to keep an eye on him with all the hullabaloo that busy, active boys with autism create? Anyway it sounds like the new crockpot is great. Hope Lizze can get her headphones soon.

The crock pot has me confused as to how it got thrown away and no one A) noticed it in the garbage -or- B) noticed that it was missing.

That’s because you’re overthinking it. When it comes to Gavin, you’ll drive yourself trying to figure it out. The reason it wasn’t noticed is because it wasn’t used very often and it apparently went out on trash day. If it’s not something we used very often, we weren’t randomly checking to make sure it was still there. Two years ago, Gavin threw away $300 worth of Google Homes. They were brand new, unopened and sitting in a big blue Best Buy bag. He apparently decided to straighten up, thought it was trash and threw them away. They were sitting off to the side because they were meant for gifts. When I went to get them a few days later, they were gone.

I didn’t notice because I mistakeningly thought that they would be where I left them and didn’t feel the need to check.

Also, to be clear. It’s not like we threw them away in the trash can sitting in the kitchen. They went straight out to the trash can at the curb, the night before trash day. He takes the trash out every Monday night. It never occurred to us to make sure he wasn’t throwing random things away. Now we know and have to be more aware of what he’s doing.

I hope that makes a bit more sense.

Good for Emmett for trying something new. Maybe letting him help you cook more often will get him to try other foods too. I’m curious why Elliott wouldn’t even touch it? What about it was so unappealing to him and would the old standby of covering it in ketchup work? And to Gavin, if he is such a good eater why has he gotten so skinny that the doctors are having him drink ensure? I always associate that with malnourishment in elderly people but I know people of any age can become malnourished. Is his metabolism super high so that he just doesn’t gain weight or is he not eating enough? Judging from my nephews boys at Gavin’s age simply can’t get to eat.

Cant get *enough* to eat.

That’s a lot of questions. Let me see if I can answer them all.

If I asked Elliott why he won’t eat it, he probably couldn’t tell me. Sensory issues wouldn’t make sense to me anyway because it could be seething as simple as it looks too brown or it’s too soft. Sensory issues are tough.

As for Gavin’s weight, no one is quite sure. It could be his metabolism is jacked up. It could be related to his autonomic issues or one of his other health issues. The only thing we tightly control is his fluid intake. His intake is 3,000 ML per day and that has to do with maintaining an equilibrium. He often makes his own meals and there’s quite a bit there.

His body struggles on a good day and so we need to be careful how he gains weight, if he does. Right now, he’s bouncing between 128 and 130 pounds. We can’t seem to get him over that 131 mark.

Out of curiosity, may I ask what it is the boys eat if you don’t cook? I can’t imagine having to purchase pre-made or processed food. Where I live it is much more expensive to do that then to purchase groceries and prepare meals yourself.

I hear you on the food issues. It drives me completely batty. Well done on your victory today. And kudos to Lizze for such a selfless act.

Just read your story. You are a saint, you have a lot’s of patience, the only way with kid’s mind. Brilliant read RT’ing now