A very rough morning for my youngest with #Autism

I’m completely overwhelmed by my life and here’s why


Trying to get him to eat anything is impossible. His menu was insanely limited, to begin with, and until we know otherwise, we have to go back on his food allergy diet. That means another trip to the grocery store ASAP and that’s not in the budget but it’s important.

Mr. Gavin is becoming a bit more reclusive than normal. We don’t see him very often because he’s spending a great deal of each day in his room. We try to encourage him to come out but that’s where he’s happy. Pushing him too far isn’t a good idea.

Yesterday he informed us that he had to go on another mission. It’s something about weird readings coming from the river. I don’t know what the fuck that means but I do know it requires intergalactic travel and probably some very evil bad guys.

I can’t tell you how exhausting this all is. Schizophrenia is a very difficult condition to help manage.

I’m at the point where I just cannot keep up with everything. It’s simply not possible. Even if I pick my battles, and trust me I do, the ones that don’t get picked are still important enough to cause major problems for us if we let them slide.

I was interrupted multiple times as writing while this. It’s frustrating but it happens when you work at home. Unfortunately, the last time I was interrupted was because our roof was leaking and dripping into our office. 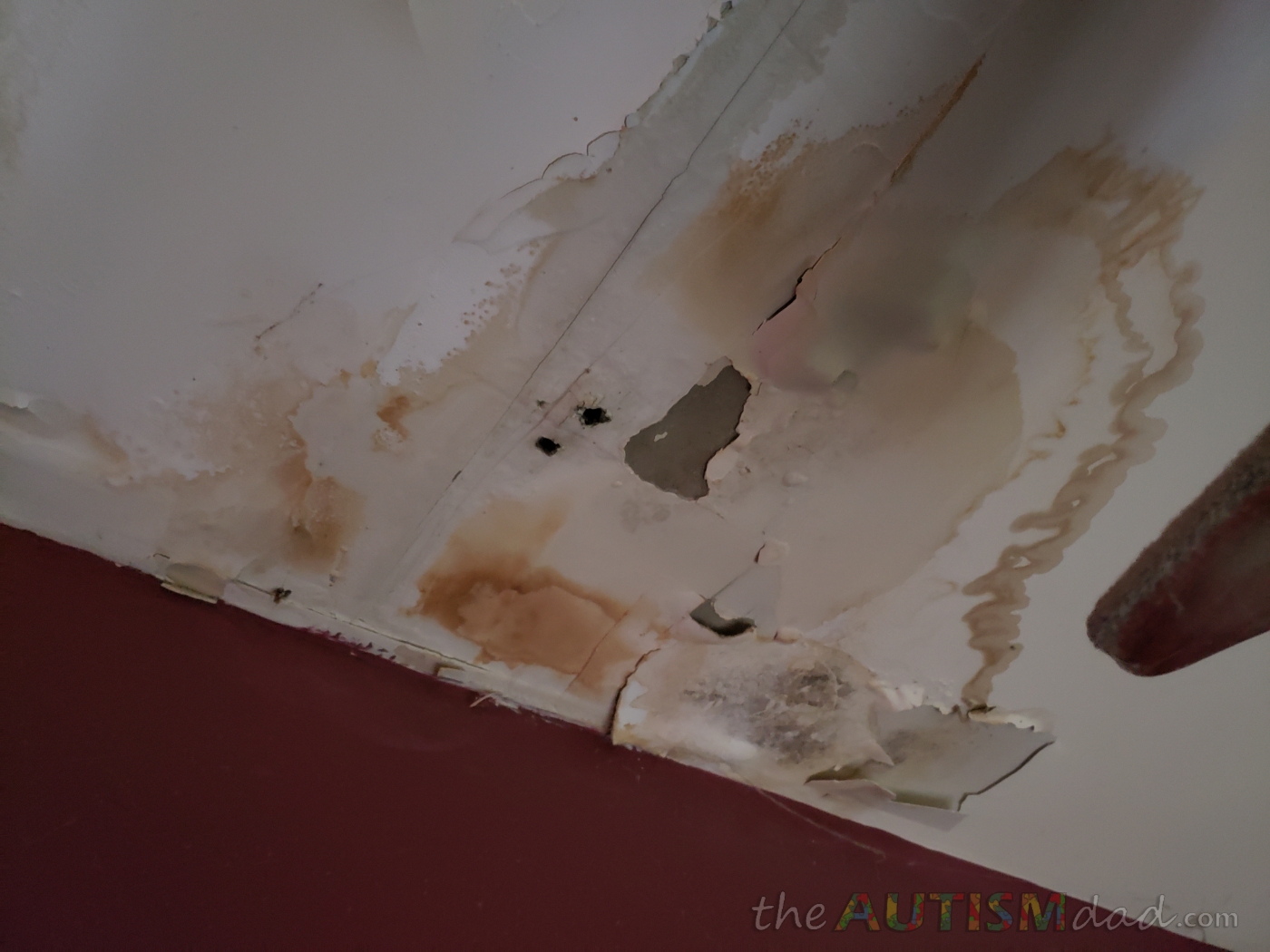 This is especially frustrating because I was just talking to my father in law about how I think the roof was finally fixed and I could finally repaint the ceiling.

It’s been about 6 years since it’s last leaked. The problem is that I’ve repaired and repainted the ceiling about half a dozens times already. Each time I did, I waited to make sure there wasn’t any leaks.

We’ve never been able to locate where the leak is coming from. In fact, we had our entire roof replaced within the last 10 years and it still leaked here. No one has been able to find it because it only ever really happens during the winter when snow sits on the roof and then slowly melts.

There’s no way to know if it’s been fixed until winter and we’re only guessing with the repairs. It doesn’t leak when it rains unless we have a serious amount of rain and that’s only happened once or twice. Anyway, it started leaking today for the first time in forever. The ceiling actually began falling apart.

I don’t use the room for an office anymore because of this and so it’s not been a priority, at least compared to everything else.

It’s frustrating because I was going to put my office back together with tax return this year. I figured it’s been long enough and if it was going to leak, it would have over the last 6 winters.

I’m just feeling overwhelmed and while I won’t quit, the idea of doing so sounds like a good idea right now.

Whatever happened to that device? I thought someone offered one to you for free.

I can only imagine the stress you must be under with everything that is going on for your family ri… https://t.co/KNm5ISuHLy

I think it does to an extent but she’s had the same migraine for over 7 years and nothing has helped. She’s been using CW cbd oil but is almost out and it’s pretty expensive. She has an appointment for medical cannabis next month. She also finally started Aimovig last week and was gifted a Cefaly for prevention.

I’m sorry, Rob. You have way more going on than any one person should have to handle. I hope things… https://t.co/2GhtUvVyfr

I am so sorry life is so overwhelming for you Yesterday I sent your article to my whole family an… https://t.co/5WKLE1qSBo

The stress has got to my wife to the point I asked her to leave the school and come back home full… https://t.co/SxbW0tYrf4

@Gs_GoneFishing Sounds like you might have an ice dam. That will cause leakage only under certain s… https://t.co/UdqFRUHXYY

Take care of yourself first. Get a break. Somehow take a mental health break.

Sounds like things are really tough for you right now. I’m sorry to hear about all that is going on… https://t.co/BtNFbR7GNN